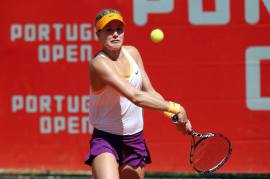 Both players looked impressive on Centralito court, beginning with the No.2-seeded Bouchard, who won five straight games from 4-2 down in the first set to take control against Yaroslava Shvedova, eventually beating the Kazakhstani in straight sets, 6-4, 6-2 (read more about that match here).

The No.7-seeded Kuznetsova followed on that court and followed Bouchard into the quarterfinals with a 5-7, 6-4, 6-1 win over María-Teresa Torró-Flor, who was coming off the first WTA title of her career at another clay court tournament in Marrakech. She had won six matches in a row going into this one. Bouchard and Kuznetsova will be playing against each other for the very first time. 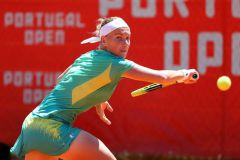 The most dramatic match of the day took place over on Court 1, as No.8 seed Elena Vesnina won a three-hour, one-minute marathon against Bojana Jovanovski, 5-7, 7-5, 7-6(7). After winning the first set, Jovanovski led 5-3 in the second set and even held match point at 5-4 - but Vesnina never stopped fighting, winning six games in a row at one point and eventually closing it out in the tie-break.

Next up for Vesnina is No.4 seed Roberta Vinci, who won the first 10 games right out of the blocks and needed just 53 minutes to beat Yanina Wickmayer, 6-0, 6-2.

Vesnina leads Vinci in their head-to-head, 4-3, though Vinci has won their last two meetings. Other early winners were No.1 seed Carla Suárez Navarro, who needed just 57 minutes to blank Barbora Zahlavova Strycova, 6-0, 6-0, and Swiss qualifier Timea Bacsinszky, who followed up her first round upset of No.3 seed Sam Stosur with a 7-5, 6-0 victory against Tunisian wildcard Ons Jabeur. 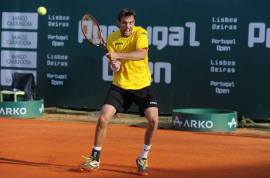 Granollers, who improves to 3-2 in his FedEx ATP Head2Head series against his fellow Spaniard, next faces qualifier Daniel Gimeno-Traver, who became the first player to reach the Portugal Open quarter-finals on Wednesday after a 6-3, 7-6(2) victory over wild card Rui Machado. Gimeno-Traver could not convert one match point when serving at 5-4, but completed his seventh win of the year in one hour and 38 minutes.