ITS DIRECTOR FOR NORTH AMERICA

Gary Plock is a tennis Hall-of-Famer in Kentucky and was a two-time NCAA All-American at University of Texas in Austin where he completed his Bachelor's Degree in Education with emphasis in Physiology.

The big-serving lefty played No.1 during his entire college career for the Texas Longhorns where he led both and teamed with Kevin Curren (Wimbledon Finalist in 1985) and Steve Denton (1981-82 Australian Open Finalist). Curren and Denton won the US Open Doubles in 1982.

His outstanding junior record includes winning the 1974 Sugar Bowl International Championships in New Orleans. Gary was a Three-time US Junior Davis Cup member and was the US Junior Southern Champion and Kentucky High School State Singles Champion for four straight years including a runner-up finish in the High School State event as an 8th grader - an unparalleled feat to this day. 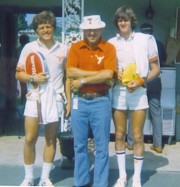 In 1978, Gary together with doubles partner Kevin Curren reached the Finals of the NCAA Championships in Athens, GA where they defeated John McEnroe and Bill Maze of Stanford University in the semi-finals (In 1979, teammate Kevin Curren won the the NCAA Singles event).

Gary and Kevin were United States Amateur Doubles winners in 1977. In the same year, Gary won the US Amateur Singles 21-and-under championships.

Gary played the Association of Tennis Professional (ATP) Tour in Nice, France; Monte Carlo and other European cities before focusing more on his studies, teaching, and sports business. Gary is the managing partner of GP Sports, Inc.

A 'Tennis Purist", Gary has a vast collection of rare tennis memorabilia and tennis equipment dating back in the 1800s.

A pride of Louisville, Gary has helped numerous institutions, sports clubs and schools as a consultant, including the International Tennis School philosophty since its inception in 1989, designing programs﻿ by using tennis as a sport to to help improve the quality of life and education for both students, the community﻿, and the under-privileged youth. ﻿

According to Gary, there is evidence that well-rounded sports and leisure programs and inclusive facilities correlate to improved academic performance.

Gary has established the ITS - GARY PLOCK TENNIS ACADEMY at GlenOaks Country Club in Louisville.

Your form message has been successfully sent.

You have entered the following data: