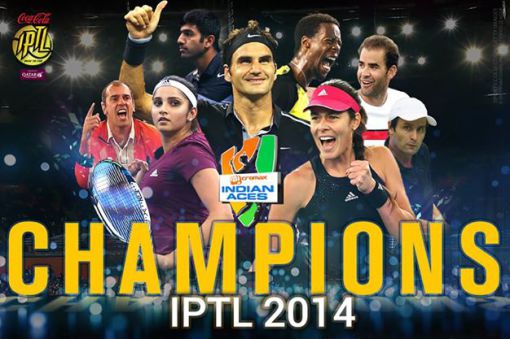 iptlworld.com: ITS Staff  - The International Premier Tennis League brought together current champions and tennis legends in a format that’s never been seen before. Created to fulfill the increasing demand for top-level tennis in Asia, it’s the first city-based professional league in the world, played across four countries. Over 80 players participated in the official draft held on 2nd March, 2014 in Dubai, drawn by the League’s innovative and competitive format. A total of 29 players were added to the 4 franchise teams – The Philippines, Singapore, India and the UAE.

The IPTL matches featured star-studded teams led by the likes of Roger Federer, Novak Djokovic, Andy Murray, Serena Williams, Maria Sharapova, Marin Cilic, Ana Ivanovic, Andre Agassi and Pete Sampras. The tournament featured a total of 21 Grand Slam Champions and 14 current and former World Number Ones. From 28th November to 13th December, 2014, the teams played a total of 24 matches in a round robin format . Micromax Indian Aces, who charmed tennis lovers in Manila, Singapore, New Delhi and Dubai, were crowned champions of the inaugural Coca-Cola International Premier Tennis League presented by Qatar Airways after an exhilarating last match witnessed by thousands of fans in the last leg in Dubai.

Each match consists of Five (5) sets. Each set is played first to six (6) games with a 5 minute Shoot-out at 5-all. No-ad scoring applies for each game and each game won counts as one (1) point for the team's total.

Order of play shall be determined by the home team. Team lineup of players shall be submitted to the umpire 45 minutes before the match begins.

The team that wins the most games accumulated from all five sets shall be declared the winner of the match. If a match is tied after five sets, the Super Shoot-out determines the match winner.

Winner of the match receives 4 points; For the losing team, point breakdown are:

A team that wins less than 10 game points, in total, gets 0 points

The team accumulating the most points in total wins the League. In case of a tie in team standings, the team with the most match wins is declared the winner, according to the following criteria, in this order: Head to head standing; Number of games won; Number of games lost; Biggest games winning margin in any single match win.

Coin Toss/Serve: At the start of each match, a coin toss decides which team serves first, in the first set of each match. The team that served last in the last game/Shoot-out of the previous set will automatically be the receiver in the next set. In case of a Super Shoot-out, a coin toss will decide who serves first.

A five (5) minute Shoot-out is played at five (5) games all, to replace the traditional seven (7) point tie breaker. The Shoot-out follows the traditional tiebreaker rules, which means that the player starting the Shoot-out serves for one (1) point, and from then onwards every player serves for two (2) points. There will be no change overs, and the player that wins the most points within the four (4) minutes wins the set.

Players have a 20 second Shot Clock between points and lose a point in case the Shot Clock runs out. If the score is tied at the end of five (5) minutes, the next point wins the Shoot-out and the set. Each player receives one (1) additional player challenge during the Shoot-out, and any un-used player challenges will be carried over from the set. The Super Shoot-out is played the same way as the Shoot-out, but it lasts for seven (7) minutes and is played to settle the score in case the total points won by the teams is tied after five (5) sets. A coin toss decides who serves first in the Super Shoot-out.

Each player receives two player challenges during the Super Shoot-out.

Unless otherwise agreed, the Super Shoot-out is played between the leading men’s players of both teams. In case the leading player is injured, the team can decide to substitute with the other male singles player, or with a doubles/legends player.

A shot clock manages the following and can be set, stopped and re-started only by the Chair Umpire:

3 minutes Shot Clock after the end of each set

Each Team Coach can call for a Time-out at any time, once (1) during each set; each Time-out lasts for 60 seconds, only.

The receiving player can call a Power Point once every set, indicating that the next point counts double.

Discussion closed
There are no entries yet.