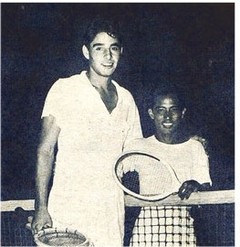 Listed as the shortest male player to play in Wimbledon from 1948 to 1953, Felicisimo Ampon was measured at four feet and 11 inches, only several inches taller than Miss C.G. Hoahing at 4'9", the shortest female participant ever in the "Championships".

Dominated by giants, Felicisimo delved in a league where he was not supposed to be competing in. His playing career record, though, suggested otherwise.  He was among the most feared 'presence' the game has ever had.

Sometimes, we use the word ‘giant’ to honor ordinary-sized individuals who have done extra-ordinary feats. Giants hold a special place in our lore both historical and literary. From the biblical giant Goliath to the fictional giant Jack and the Beanstalk, we are fascinated by these larger –than- life personalities.

Felicisimo is definitely one true-to-life example. 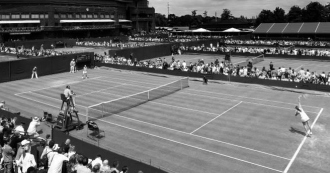 The All-England Tennis & Croquet Club in Wimbledon where Felicisimo played from 1948 to 1953 reaching the 3rd round in 49, 50, 53. Photo wimbledon.com

I had just been eliminated from the singles qualifying round of the U.S. Open in Flushing Meadows, New York in 1982.

I approached a gentleman at the tournament desk to ask for the schedule of the Men’s Doubles main draw. After seeing my country of origin beside my name among the players’ list, his first words to me were ‘Philippines?’ - followed by “FELICISIMO AMPON!” To my surprise it was William ‘Bill’ Talbert, inductee into the International Hall of Fame in 1967, whom I read so much about growing up in Manila in the late 1960s.

Mr. Talbert, or Bill as he preferred to be called, was serving as the tournament director. He was also the tournament’s Men’s Singles finalist in 1945 when the U.S. Championships was still held at the West Side Tennis Club grass courts at Forest Hills until 1977 before it was moved to the current Flushing Meadows venue.

It was at the library of the Philippine Columbian Association tennis courts where I would read the collection ‘World Tennis’ monthly magazine while waiting for the courts to open up. There was always an article or two about Mr. Talbert's exploits. 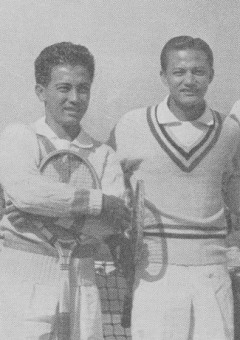 Felicisimo's partner Raymundo Deyro, right, reached the 4th round of French Open in 1953.

The PCA in Taft Avenue in Manila, Philippine was a favorite destination of local and foreign intellectuals in their respective fields during their visit to the Orient.

One noted guest who conducted a lecture in the expansive bibliotheque vis-a-vis the tennis courts was British historian and philosopher of history Albert J. Toynbee, best known for his voluminous work on A Study of History (1934–61), through which he examined the rise and fall of 26 civilizations in the course of human history.

Yes, even Mr. Talbert himself graced the facilities of PCA in the 50s and 60s along with great names like Ken Rosewall, Lew Hoad, Frank Sedgman, and Neale Fraser - Australian Davis Cup proteges of the late great Harry Hopman who made Manila a 'must stop-over' en-route to Europe to see his young guns play exhibition matches and pay his respects to Mr. Ampon and his partner Raymundo Deyro (Asian Games Gold-Medalist in '58; Wimbledon R3 in '48, '53; French Open R4 in '53). 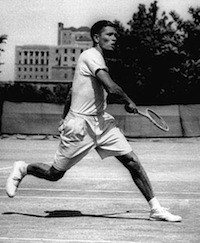 Lucky me, instead of just giving the detail I had asked for, Mr. Talbert got up from his desk and went on a story-telling binge describing how good a tennis player Felicisimo Ampon was.

Great! I grew up idolizing Mr. Ampon, hearing it from one of his peers and from a true legend is a real treat. As a nine year old, my dad took me and my five older brothers to our first tennis lessons with Felicisimo’s father Felix, a Philippine champion in the 1920s, at the Biak-na-bato tennis courts in Quezon City in 1966.

Every tennis court I played on as a kid, the name ‘Totoy Ampon’ always reverberated. ‘Totoy’ was Felicisimo’s nickname which meant ‘tiny’ or 'little version' in the local Tagalog language.

Every young Filipino player possessing flashes of Felicisimo’s brilliance would be named Totoy (as in Totoy Alina and Totoy Rafon, Filipino players who dominated junior and men’s divisions in the late 60s and 70s).

“We will never see another player like him for generations to come. He was one of the toughest competitors I ever played against,” said Talbert who was ranked in the top ten singles 13 times between 1941 and 1954 while also winning nine Grand Slam Doubles titles.

Bill was talking about a little giant who, on record, is the shortest male tennis player to ever compete in the world stage. ‘Mighty Mite’ as Ampon was nick-named later on by Willie Hernandez Sr. of the Philippine Sportswriters Association after a cartoon super-hero Mighty Mouse. He is listed as “the shortest player” to play in Wimbledon from 1948 until 1953 at four feet and eleven inches (4’11”). 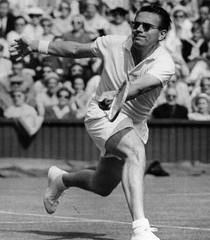 Yes, that’s right. Not even 5 feet tall. And yet he was going toe-to-toe against the world’s top elite players who towered head and shoulders above him. He was competing against players whose racket-arm reach would be twice longer than Felicisimo's actual height.

Unlike boxing, tennis competitions do not have weight divisions assigned to each competitor. No weight and no height restrictions. Only the three-foot net divide opposing tennis players. It was open to all individuals in different sizes, shapes, and forms playing one-on-one on the 78-feet-long and 27-feet-wide tennis court.

We would never see boxing's pound-for-pound icon Manny Pacquiao taking on heavyweight champion Vladimir Klitschko. But Felicisimo did it in tennis. And people who saw him decimate the Goliaths of the game must have been awed consistently nodding and shaking their heads in disbelief.

Born on October 20, 1920, Felicisimo was already showing signs of greatness when he won the Gold Medal of the Far Eastern Games at age 14. He then reached the finals of the Philippine Championships as a 16 year old losing to Philippine Men’s No.1 Leonardo Gavia.

In his maiden tour to the United States in 1939, Ampon, barely 19, took the tennis legend Bobby Riggs, the top-seed and eventual champion, to four tough sets in the second round of the 1939 U.S. Championships at the Forest Hills grasscourts by a score of 2-6, 6-4, 6-4, 10-8. The following month in October, Riggs would again play Ampon in the third round of the Pacific Southwest at the Los Angeles Tennis Club hard courts beating the Filipino upstart 6-3, 0-6, 6-1.

Besides the US title, Riggs would go on that season to win the 1939 Wimbledon singles crown. The L.A. tournament included legends Jack Kramer, Ted Schroeder, Adrian Quist, John Bromwich, Frank Parker and Australian Harry Hopman - a three-time Australian Open finalist - all of whom belonged to world’s elite netters. 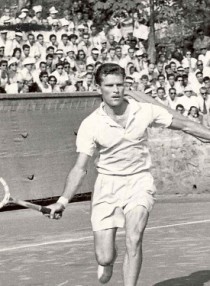 It would take seven years before Ampon would be able to compete again in the elite world stage as the Second World War broke out in the Pacific in December of 1941.

For this up-and-coming tennis talent, the game had to take a hiatus as bullets and bombs from the invading Japanese forces were less friendly from the canon-balls being served by Jack Kramer and his ilk on the tennis courts. The war would deny young Ampon the best years of his tennis career between 19 and 26 years of age.

Remarkably he would make a run to the top echelons of tennis ranks despite being past his prime. From 1946 until 1953, Felicisimo’s results in the Grand Slam events and the major U.S., European tournaments would earn him consistent berths in the late rounds, quarterfinals or the semi-finals.

Had computer rankings been applied then, easily he would be ranked inside the top-ten or top-twenty players in his generation. Ampon claimed several international championships including the Cologne International in August of 1951 where he defeated then-current World No.1 Jaroslav Drobny in the finals 2-6 6-1 6-0 6-1. That same season, Drobny was crowned French Champion in Roland Garros earlier in May.

In 1952, Felicisimo reached the quarterfinals of French Open in Roland Garros where the 32-year old "Little Maestro" practically "toyed" with Mr. Talbert's protégé, the athletic Tony Trabert, also a Cincinnati-born talent, in the Round of 16 before bowing out to Ken McGregor. The Australian legend was 1951 Wimbledon singles finalist and the 1952 Australian Open champion.

A sports writer for the American newspaper Reading Eagle on May 24, 1952 reported, "Little Felicisimo Ampon, pride of the Philippines whipped Tony Trabert today in the biggest upset of the current French International Tennis Tournament. The plucky, ever-moving Filipino shot around and over Trabert to win 7-5, 6-1, 6-1 and gain the quarterfinal round of this important preliminary to the Wimbledon Championships".

After the defeat by Ampon, the following year, Trabert would win a total of five Grand Slam titles from 1953 to 1955, including two French (’54, ’55), one Wimbledon (’55), and two US championships (’53, ’55). The loss to Felicisimo must have been an important lesson for young Trabert's approach to the game that brute force may not always yield optimal results. 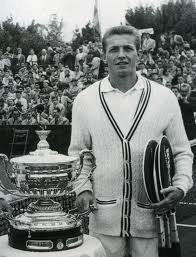 Felicisimo would again reach the quarter-finals of the 1953 French Championships at Roland Garros that included an upset win in over highly heralded (now in Hall of Fame) 6-foot-3 Budge Patty, the 1950 French and Wimbledon Singles Champion, in the round of 16s with the score of 6-4, 6-2, 6-4 before losing to eventual champion Ken Rosewall in straight sets in the Quarterfinals.

“Once you’re on the court with him, his tenacity, touch, speed and anticipation made up for his lack of size. He actually looks big on the court as he covers the whole place like a blanket. And he made you earn every point, quite stingy that gentleman,” continued then-64-year old Mr. Talbert who was a diabetic, one of the few known to be in sports at a highly competitive level, and for many years was held up as an example of how the disease could be surmounted.

Talbert had played several matches against Ampon. Most notable was the 1950 Pan American Championships in Mexico City. Talbert had beaten Ampon earlier in the year at the French Championships in Roland Garros 3-6, 7-5, 6-1, 6-3 in the last 16s (4th round). In 1946, Talbert and Ampon met in the last eight of the U.S. Clay Court Championships with the former again prevailing in straight sets 6-2,6-2, 6-4.

This time around, though it was again on clay and Mexico City’s high altitude was producing quicker and higher bounces on the dry slippery surface deemed an advantage for taller players. The conditions didn't matter much as the under-sized Filipino still beat Talbert convincingly 3-6, 6-4, 6-1, 6-2 in the quarterfinals.

Ampon’s next opponent in the semis was Straight Clark who had caused a major tremor in the tournament when he upended the No. 2 seed Herbert Flam in a roller-coaster match 6-2, 6-4, 4-6, 0-6, 6-0 in the quarters. Only several weeks earlier, Flam was the Runner-up at U.S Championships at Forest Hills to No.1 seed Art Larsen.

In this tournament however Brown would not be denied as he came back from two sets to one down to eke-out an improbable victory over the reigning Grand Slam event champion in five sets 3-6 6-3 2-6 7-5 8-6. According to Talbert, Larsen held several match points but each time Brown came-up big with running forehand winners. Continue onto: PART II