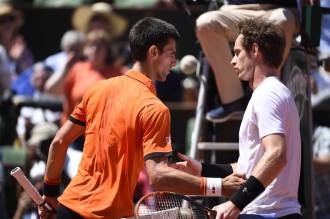 atpworldtour.com: June 6, 2015 Paris, France - Novak Djokovic needed two days to dismiss Andy Murray 6-3, 6-3, 5-7, 5-7, 6-1 and book his spot in a third Roland Garros final. For Djokovic, it was well worth the wait. The Serb will look to become the eighth player to complete the career Grand Slam on Sunday when he squares off against Stan Wawrinka.

A semi-final affair that started on Friday afternoon in Paris, Djokovic and Murray battled for more than three hours before rain and fading light halted their 27th encounter. The top seeded Serb led two sets to one, with the fourth knotted at 3-all. Despite Murray snatching the overnight momentum after capturing the third set, it was Djokovic who pulled away when play resumed on Saturday.

Murray's mettle was on full display in forcing a decider, but his bid to record a seventh two-set comeback in Grand Slams was derailed. The Belgrade native, who punched his ticket to a ninth successive Barclays ATP World Tour Finals after defeating Rafael Nadal in Wednesday's quarter-finals, extended his winning streak to 28 straight. He reached his 16th Grand Slam final and will bid to join Fred Perry, Don Budge, Rod Laver, Roy Emerson, Andre Agassi, Roger Federer and Rafael Nadal in the exclusive 'Career Grand Slam' club.

Djokovic will look to extend his FedEx ATP Head2Head mark against Wawrinka to 18-3 when the pair square off on Sunday. He has won two straight encounters since the Swiss stunned the World No. 1 at the 2014 Australian Open, and leads 2-1 in tour-level finals, earning wins in Vienna 2007 and Rome 2008 while Wawrinka triumphed on the clay of Umag in 2006. 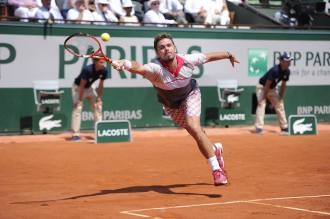 atpworldtennis.com: June 5, 2015 Paris, France - One year after a first-round exit in Paris, Stan Wawrinka has reached a second major final with his 6-3, 6-7(1), 7-6(3), 6-4 defeat of Frenchman Jo-Wilfried Tsonga on a steamy Friday at Roland Garros. The 2014 Australian Open champion is the first No. 8 seed in the Open Era to reach the championship match at the French Open. He will face off against either World No. 1 Novak Djokovic or World No. 3 Andy Murray next.

Wawrinka, who won the boys’ singles title here in 2003 (d. Brian Baker), captured a routine first set thanks to an early break. He looked to be in control in the second despite a 31 per cent first serve percentage, earning five break points on Tsonga’s service game at 5-5. Amid chants of “ALLEZ, TSON-GA”, the hometown hero would maintain his composure, holding serve and dominating in the ensuing tie-break. 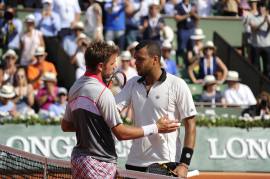 The 72-minute third set featured no service breaks, forcing Wawrinka to take a two-set lead in yet another tie-break. An early break in the fourth set would give the Swiss the leeway he needed to seal victory. At the conclusion of the nearly four-hour match, Wawrinka had served 15 aces and saved 16 of the 17 break points he faced.

Of the 39 players aged 30 and over who started in the French Open draw, Tsonga and Wawrinka, both 30, were the two remaining. The duo had split their previous six meetings, including two five-set matches at Roland Garros in 2011 and ’12. Wawrinka has now won nine of his past 10 matches against French opposition at the Grand Slams.

Meanwhile, Novak Djokovic and Andy Murray will resume their dramatic Roland Garros semi-final clash on Saturday after it was suspended midway through the fourth set on Friday evening in Paris. Officials stopped the match when Djokovic was leading 6-3, 6-3, 5-7, 3-3 in anticipation of a storm, that had been forecast throughout the day, arriving at Roland Garros imminently. The match will re-start at 1pm local time Saturday, with the winner to face Wawrinka in Sunday’s final at the clay-court Grand Slam. 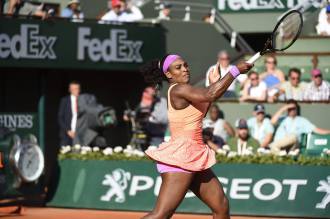 wtatennis.com: June 4, 2015 Paris, France – It almost didn't happen - she was down a set and a break - but Serena Williams summoned up another epic comeback to get within one win of her milestone 20th major title.  She looked down and out - her opponent was playing inspired tennis, getting every ball that she could back and ripping huge serves and groundstrokes into the corners, and going up a set and a break.

But like she's done so many times in her career - including three times already this fortnight - Serena Williams clawed back, beating Timea Bacsinszky to reach the French Open final. The No.23-seeded Bacsinszky was having the tournament of her life, her mix of consistency and power off the ground bringing her wins over No.16 seed Madison Keys and No.4 seed Petra Kvitova en route to her first major semifinal, and early on against the No.1-seeded Williams she was a world-beater.

Bacsinszky won the first set and broke in a marathon fifth game of the second set for a 6-4, 3-2 lead. That's when Williams, a 19-time Grand Slam winner, found her Grand Slam-winning range again, reeling off 10 games in a row and completely running away with the third set to prevail, 4-6, 6-3, 6-0. She's now a win away from her milestone 20th Grand Slam title, which would be the third-most all-time after Margaret Court (who won 24 Grand Slam titles) and Steffi Graf (who won 22 Grand Slam titles). 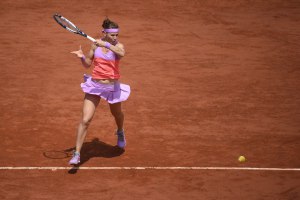 Standing between Williams and that milestone is No.13 seed Lucie Safarova, who rebounded from a slow start and held off an inspired fight-back from Ana Ivanovic in the second set to reach the first Grand Slam final of her career at the French Open.

But a mid-match surge from Safarova, winning eight of the next nine games, put her ahead a set and a break, 7-5, 3-1, and a few games later she found herself serving for the match at 5-4 in the second set. It was a pivotal game - she had a match point, double faulting, and she fought off three break points, but with a backhand that clipped the tape and sailed wide, Ivanovic had the break back for 5-all.

But there was one last swing as the No.13-seeded Safarova broke then held to close out the No.7-seeded Ivanovic after an hour and 52 minutes, 7-5, 7-5, rifling one last forehand winner on match point. It was the Czech's 36th winner of the match, exactly 18 of those coming off that forehand wing. Before this, Safarova's best Grand Slam result was a semifinal at Wimbledon last year, falling to Petra Kvitova, whom she will join in the Top 10 come Monday - it will be the first time two Czech women will be in the Top 10 together since October 1989 (when Helena Sukova and Jana Novotna were there).