U.S. Tennis and the Economy 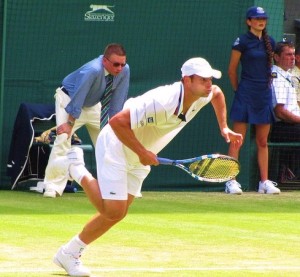 When the ATP World Tour released the final rankings on Monday November 19 2012, it marked the first year that an American male tennis player failed to make the top ten season-ending list since 1973.

The 2012 season was also the third consecutive year that an American male tennis player did not reach a Grand Slam final since Andy Roddick in 2009 (Wimbledon).

In a top 100 field dominated by 72 Europeans, Spain and France fielded the most players with twelve and ten players respectively. The United States was left with only five active players after former world No.1 Roddick retired last September at the US Open.

Mardy Fish, the last US player to make the top ten rankings in 2011, fell down to No.27 after a bout of illness that forced the 30-year-old to miss the second half of the 2012 season. That leaves four players No.14 John Isner, No.22 Sam Querry, No.61 Brian Baker, and No.70 Ryan Harrison to carry the unenviable load of bringing America back to tennis greatness.﻿

It’s a stunning downward trend for a nation that saw tennis greats Jimmy Connors and John McEnroe dominate in the mid-late 70s and early 80s. The level of players during the era of American dominance was so deep between 1979 and 1983 that there were six other US players, whose names were not Connors or McEnroe, which either won or reached the finals of a Grand Slam tournament.

In 1982, the United States had 45 tennis players listed in the top 100 of the ATP tour year-end rankings. Four belonged to the elite ten led by No.1 John McEnroe, followed by No.2 Jimmy Connors, No.5 Vitas Gerulaitis, and No.8 Gene Mayer with Steve Denton just missing the tenth spot by a whisker at No.11.

The brilliant period ended in 2003 after Agassi won the Australian Open in 2003 followed by the youthful talented newcomer Andy Roddick winning the US Open later that season in September.  The Texan, then 21-year-old, took the top-rank honors at season’s end.

Soon after another set of young players emerged this time all Europeans: Roger Federer, Rafael Nadal, and Novak Djokovic. They would win a total 33 major  singles titles between them from 2003 until 2012. Andy Murray of Great Britain recently joined the Grand Slam club winning both the Olympic Gold held at Wimbledon and the US Open.

So, why the decline?

The middle-class has been losing ground for the past 20 years.﻿ The decline in US tennis may be attributed to the economic struggle of American middle-class families in the last decade. The year 2008 saw the U.S. housing and credit bubble burst causing a global economic free-fall for the first time since the Great Depression.

In the 1970s and 80s, college kids were all over Europe, South America and Asia travelling right after the school year gaining much needed experience as part of their liberal education - maturing and building their game. They have full support from academic institutions with excellent athletic facilities, programs conducted by highly educated coaches.

Not anymore since student loans have skyrocketed while college tuition has also become prohibitive and full-athletic scholarships scarce. Middle class families have seen their “average hourly earnings" in America decrease since the 1960s according to Pew Research.

Earnings and net worth have fallen since the mid-2000s and that about 85% of the middle class say it is harder to maintain their standard of living than it was ten years ago. The first to be cut from family expenses are tennis lessons, equipment and out of town tournament trips. Home prices plummeted making it difficult for families to take advantage of home-equity loans that could help fund their talented children’s programs.﻿

There seem to be a kind of “schism” within the country’s leading governing  bodies on the method in regards to the short- and long-term strategies of players' development. Where and how to distribute shrinking valuable resources (funding, coaching, etc.) have been also a difficult task to coordinate.﻿

"Men's tennis as a metaphor for America's long-term struggles" 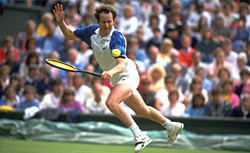 Eliot Spitzer, the former New York Governor and Attorney General, joined in the fray last year during the US Open 2011 when American players were all struggling getting past the early rounds.

He wrote an eloquent article on slate.com “World Defeats US in Four Sets” on the tenth year anniversary of 9/11 on August 29, 2011. Also sub-titled, “How the decline of American men's tennis can explain global economics”, it explains best the current state of American men’s tennis in relation to the rest of the world: Globalization.

“For those of us who came of age watching Jimmy Connors and John McEnroe do battle, followed by years-long domination by Pete Sampras, something is missing at this Open, something, unfortunately, that we have gotten used to over the past several years: a legitimate American men's challenger. The field is dominated so totally by the grace of Roger Federer, the power of Rafael Nadal, and the flawless execution of Novak Djokovic, that it's easy to forget that it has been eight years since an American man—Andy Roddick at the 2003 U.S. Open—has won a Grand Slam tournament. Indeed, the only American among the top 10 men's seeds this year is No. 8 Mardy Fish. The next American man—Andy Roddick—is seeded 21st.”

Governor Spitzer continues, “I can't help but see men's tennis as a metaphor for America's long-term struggles. Twenty years ago, the U.S. was the undisputed superpower. The Berlin Wall had fallen. Our economy was the symbol of capitalism ascendant over all other ideologies. President Reagan had restored Morning in America. And the U.S. dominated the men's tennis circuit. Twenty years ago, four American men graced the top 10: Jim Courier, Ivan Lendl (who got a green card in 1987), Sampras, and Andre Agassi. And McEnroe still survived at No. 17. In the entire '90s, American men won an amazing six U.S. Open championships and an even more amazing seven Wimbledon titles. We were at the top of our game. So what does this mean? As a tennis player, I hope the lesson is: If we regain our stature in the tennis pantheon, our position in global affairs will return. That sounds silly, but the logical error in that statement is not dissimilar from the one that is made all the time on serious issues: confusing simultaneity and causation. It is one of the grave flaws in our political dialogue.﻿﻿"

"Example: Deficits are up, the economy is not growing, therefore, we must shrink the deficit to restore growth. Wrong. Deficits are up for multiple reasons, but most economists now would agree—not just the fervent Keynesians—that we have a demand crisis, not a deficit crisis, and that the underutilization of our capacity is the grave issue to address now. The Paul Ryan-Tea Party mania for slashing spending will reduce GDP. Look at the impact of British Prime Minister David Cameron's economic policies as Exhibit A for this. Look at President Herbert Hoover's failed policies during the Great Depression as Exhibit B."

"The real import of the decline of American men's tennis is that it vividly demonstrates the most significant change in the world over the past 20 years: globalization. For 50 years after the end of World War II, we were the only nation that had the rule of law, liberal democracy, market-based competition, intellectual capital, traditional capital, skilled labor, and a middle-class consumer base. As these critical inputs to prosperity have spread around the world, amounting to an enormous victory for the ideology we have espoused, the playing field—or rather, the tennis court—has gotten a bit more crowded.  It is not just in the realms of cars, airplanes, computers, fashion, and political leadership, that globalization has led to Tom Friedman's flat world or Fareed Zakaria's "rise of the rest." It is in women's soccer, swimming, basketball, and tennis."

"But this is no reason for despair and resignation. Great competition allows great competitors to rise to the occasion. Who knows? Mardy Fish may pull the upset, Andy Roddick may serve his way to glory one more time, and emerging from the junior ranks may be the next McEnroe, Connors, or Arthur Ashe, ready to lift our spirits."