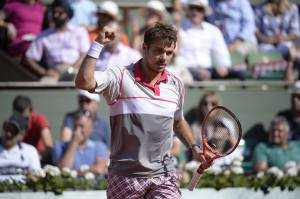 atpworldtour.com: June 7, 2015 Paris, France - Stan Wawrinka captured his second Grand Slam championship and denied Novak Djokovic a slice of history on Sunday in Paris as he rallied from a set down to beat the Serb 4-6, 6-4, 6-3, 6-4 in the Roland Garros final. The Swiss was warmly congratulated at the handshake by Djokovic before climbing into the stands to celebrate with his coach, Magnus Norman – the runner-up at Roland Garros in 2000 – and his family. He then returned to the court to embrace Djokovic once more.

Three-time Roland Garros champion Gustavo Kuerten, who beat Norman in the 2000 final, presented La Coupe des Mousquetaires to Wawrinka. There was a special and prolonged ovation for three-time runner-up Djokovic, who was moved to tears by the reception he received on Court Philippe Chatrier.

Wawrinka was rewarded for playing lights-out tennis for much of the three-hour, 12-minute contest. He struck 59 winners, almost twice as many as Djokovic, and never let his head drop as the Serb relentlessly fended off break points. After rallying from 0/40 down in the eighth game of the fourth set – having already been a break down – Wawrinka red-lined a backhand winner to break Djokovic and served out the contest, saving break point before finishing with another lethal backhand.

Wawrinka will return to the Top 4 in the Emirates ATP Rankings on Monday after joining Roger Federer (2009) as the only Swiss champions at the clay-court Grand Slam. The Lausanne native added to the Australian Open crown he won in January 2014 (d. Nadal), making him just the sixth active player to win multiple major titles.  The 30-year-old Wawrinka, who won the boys’ singles title in Paris in 2003 (d. Baker), is the first former junior champion to lift the men’s singles trophy since Mats Wilander in 1988. 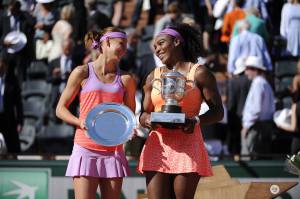 Safarova and Williams during the award ceremonies. Photo rolandgarros.com

wtatennis.com: June 6, 2015 Paris, France - After surviving her toughest ever path to a Grand Slam final - four times in six matches she had to fight back from a set down, even coming within three points of defeat in one of those matches - Serena Williams survived another three-setter against giant-killer Lucie Safarova to win her third Grand Slam title in a row, and the milestone 20th Grand Slam title of her career.

Safarova was having the tournament of her life, powering into her first Grand Slam final without even dropping a set, taking out a pair of former champions - Maria Sharapova and Ana Ivanovic - en route. Meanwhile, Williams was having the fight of her life time and time again en route to the final, having to rally from a set down four times in six matches, her closest call coming in the fourth round as she was three points from losing against inspired WTA Rising Star Sloane Stephens serving at 1-6, 4-5, 0-15.

And she wasn't out of the woods yet. It looked like it was going to be an easier day at the office for a while - after just over an hour on the court Williams found herself up a set and a double break at 6-3, 4-1, even going up 40-15 in that game - double game point for a seemingly unstoppable 6-3, 5-1 lead. The match turned in a big way from there. Safarova dug out of that double game point and ended up winning five of the next seven games to push the second set to a tie-break, and after she raced through that tie-break, she raced out to an early 2-0 lead in the third set - Williams was in real danger.

But like she's done so many times in her illustrious career there was one last fightback left, and the No.1-seeded Williams won six games in a row to edge the No.13-seeded Safarova, 6-3, 6-7(2), 6-2. Williams is the third player in tennis history, male or female, to win 20 majors, after Margaret Court (24) and Steffi Graf (22). She's the first player to win three straight majors since she did it herself during the Serena Slam, when she won four straight between the 2002 French Open and 2003 Australian Open. And she's the first player to win the Australian-French Open double since 2001 (Jennifer Capriati).