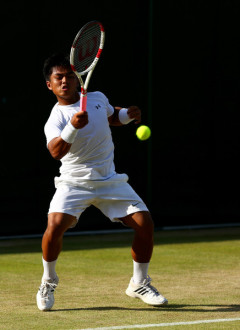 American William Blumberg, the No.10 seed, defeated Lim 6-4 6-1 in the second round played on Court 11 Tuesday.

Although the score-line indicate a one-sided affair, what transpired on the field, though, was anything but. It was a tight match.

Lim was broken once in the crucial first set and three times in the second. Both players mixed their game with serve-and-volley tactics with Blumberg attacking the net 43 times winning 31 (72%) while Lim attempted 35 winning 25 (71%), proving a tight contest the difference being timely hits converting points into games. 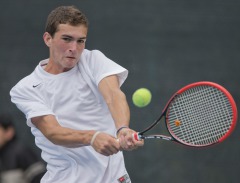 Looking ahead, this ever-improving young talent, with a big-forehand, whose game can develop into a solid world-class game, will have two more years to improve on his mark in Wimbledon and other Junior Grand Slams before further revving his style up to a man's game.

To have a chance in the international pro tour where Philippine Davis Cup star Treat Huey is currently enjoying success on the ATP World Tour, so far Lim has shown his willingness to improve and do what it takes to reach his potential - on top of his naturally strong mind-set and heart for the game at a young age, this is encouraging.

Felix Barrientos reached the Wimbledon Boy’s Singles semi-finals in 1985; and Francis Alcantara claiming the Australian Open Boy’s Doubles crown in Melbourne with partner Taiwan’s Cheng-Peng Hsieh in 2009. These feats may serve as a motivation for the young Lim.

In the next few years, having proven he now belongs with the current crop of world junior talents, Lim may have an excellent shot at a Top-Ten finish in the ITF Junior ladder which in 1985 saw Manny Tolentino claiming an ITF World No.1 ranking in 1985-86 together with Barrientos - Top-10ers all through their junior careers. Lim is the the youngest player ranked in the current Top 50 ITF junior players. 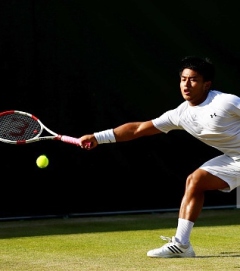 London, England - Philippine No.1 Junior Alberto Lim willed his way through to another thrilling contest thus booking himself a spot in the second round of the Wimbledon Championships in the Boys Singles event on Monday.

Lim, who just turned 16 in May, won two nerve-wrecking tiebreakers to edge out hometown favorite Jonathan Gray of Great Britain 7-6(7-4) 7-6(13-11) in a match that lasted two hours and 6 minutes.

After playing a torrid pair of matches during qualifying rounds where the World No.45 Junior gutted out a total of 74 games in five sets, Lim was match-tougher on Monday and more aggressive than his 18-year opponent hitting 34 winners to Gray's 21.

Lim attacked the net at every opportunity winning eleven points out of 17 attempts keeping Gray off-balance for most of the match on Court 14 of this tradition-rich All England Tennis and Croquet Club.

After both players faced matchpoints and set-points in the second set tie-breaker, Lim's assertive mind-set paid off on the 24th point when Gray returned his forehand just wide to give the Filipino an important victory.

For a place in the round of 16, Lim is set to play No.10 seed American William Blumberg who defeated Uzbekistan’s Djurabeck Karimov 6-7(5) 6-4 6-4 in two hours and 7 minutes. 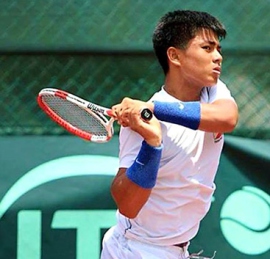 July 6 2015 by Beeyong Sison : London, England - Top Filipino junior Albert Lim is set to play his maiden Wimbledon Championships in the Boys Singles 18-under event at the All-England Tennis and Croquet Club.

The 16-year old Lim, who went through tough qualifying round matches last week at Roehampton, will face Great Britain’s Jonathan Gray in the first round main draw on Monday at 11:00 am on Court 14.

In the final qualifying round, the big-hitting Lim came back from the brink of defeat rallying past Japan’s Yuya Ito 1-6 7-6(3) 13-11 in a marathon thriller. 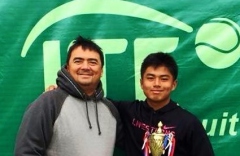 Coached by ITS Subic’s Martin Misa, the young tough-minded right-hander recently broke into the International Tennis Federation (ITF) Top 50 in April gaining a World No. 45 ranking.

Back-to-back ITF Grade 2 and 3 level tournament victories in New Delhi and Chandigahr at the start of the 2015 season gave the Letran High School NCAA champion a big boost of confidence after a runner-up finish to Phillipines' multi-titled local hero Johnny Arcilla at the PCA Men's Open in Manila in December.

Lim, who also defeated the 18-year old Ito in the Chandigahr Junior final 7-6(5) 6-4, reached the Grade I level semifinals in singles then teamed with Vietnam’s Ly Hoang Nam to win the doubles titles held in Sarawak, Malaysia in March. 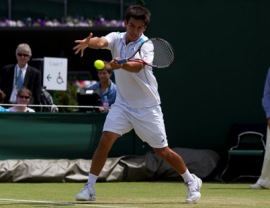 July 4 2015 ITS Staff - Philippine Davis Cup player Treat Huey and American partner Scott Lipsky failed to advance to the second week losing to Jonathan Erlich of Israel and Philipp Pletzschner of Germany 6-3 7-5 7-6(3) in the second round.

In their openers, Huey and Lipsky upset No.12 seeds Pablo Cuevas of Uruguay and Spain’s David Marrero 7-6(2) 6-2 6-4. Huey is a two-time Grand Slam quarterfinalist at the Australian Open and U.S. Open with former partner Dominik Inglot of Great Britain who this year is playing with 2014 French Open Doubles titlist Edouard Roger-Vasselin of France. Inglot and his French partner lost to Marcin Matkowski of Poland and Zenad Zimonjic in five sets in the second round.