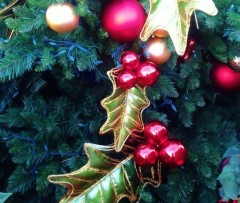 December 25, 2012, Beeyong Sison - Millions of Christians around the world will be celebrating the most widely observed holiday, the birth of Jesus Christ.

Christmas, or Christmastide, as it is also known is one of the seasons of the liturgical year of most Christian churches.

An increasing number of non-Christians in many countries also observe Christmas as a civic holiday. The meaning of Christmas to many Christians in a traditional sense brings great joy, a time when God shows His great love for his followers by sending his Son, Jesus, to be born bringing great hope to the world.

But also for many, Christmas is a time of sorrow and pain. A lot of people will be saddened that their loved ones will not be able to come home for different reasons. Some are mired in poverty and homelessness that a simple meal will not be available. They can only wish.

Some families are burying their children instead of having them open their gifts. They grieve for their loss. For many, Christmas will become a reminder not because of their joy of being with their love ones, but a reminder of the pain and suffering from the injuries or the loss of their loved ones.

The recent carnage dominating last week’s news turned everyone I know sick to the core. I could not muster the courage not to cry and bawl like a little child when facts began to sink in after hearing the morning news from Newtown, Connecticut:

I had just taken my son Josh, eleven, and daughter Tennile, six, to their elementary school named after Susan B. Anthony in Northern California that fateful Friday morning on December 14. The worst case scenario kept playing over and over my mind. These are my own children. They are my kids’ teachers. This could have been my children's school principal Ms. Gay Gardner-Berk instead of Dawn Lafferty Hochsprung of Newtown.

It could have been anybody and everybody. Like my children’s, the Sandy Hook Elementary School was busy preparing for their holiday class performance of Christmas carols, reindeers and Santa Claus. Some couldn’t wait for their Hanukkah money.

Who could do such a cowardly act. All I could do was get in and out of a trance trying to sink things in while all the cable channels went on breaking news.  A little past noon that same fateful day another bulletin came in, this time in China:

A man with a knife wounded 22 children, at least two of them seriously, at a primary school in central China. The attack happened just at the gate of a school in Chenpeng Village in Henan province.

I couldn’t help but think about a book I came across in the seventies, “When Bad Things Happen to Good People,” written by a rabbi named Harold Kushner. If the world we live in is governed by God, who is of a good and loving nature, why is there so much suffering? Why is there so much pain? And worst of all, why does it happen to our beautiful children, so innocent and so defenseless.

Later that day, I was able to share the developments with my neighbor, Dr. Eun Suk Cho, my regular tennis partner and Pastor of Korean Presbyterian Church. He received his doctorate at Yale in New Haven, 30 miles from Newtown.

After calmly hearing the details and some reflection, he referred to the Gospel of Matthew, Chapter 2, where Herod ordered the execution of all young male children in the village of Bethlehem to avoid losing his throne to a newborn King of the Jews whose birth had been announced to him by the Magi. In the words of the prophet Jeremiah as quoted in verse 18:

“A voice was heard in Ramah, sobbing and loudly lamenting; it was Rachel weeping for her children, refusing to be comforted because they were no more.”

It is one of the Old Testament prophecies fulfilled after the birth of Christ. The Slaughter or Massacre of the Innocents, as it is commonly known, is the biblical narrative of infanticide ordered by Herod the Great, the Roman appointed King of the Jews.

The massacre of the innocents is the other side of Christmas. This is also the dark side of the Bible where many choose to ignore and are seldom discussed. It is a disturbing realization that despite our great human expectations and good will, the world we live in remains the same as exemplified by the massacre of 20 innocent children and their mentors at Newtown.

This Christmas "meltdown" of modern civilization and the ego-centered way of life seems so trivial and meaningless in contrast with the suffering inflicted on Sandy Hook Elementary School and on the children of Chenpeng Village.

Yes, people become filled with joy during Christmas season, a period of family visits, gratitude, and constant companion, in celebration of the birth of Christ. But then grief also takes over knowing the suffering and the inconsolable pain that many of our neighbors are going through.

This includes us when we miss our love ones who have passed on and those whom we are separated from. We all knew of home is where love is set, hence the feeling of “homelessness” becomes unbearable when we cannot be with our dearly beloved.

For Christians and non-Christians alike, Jesus’s example of practicing love, compassion, charity, daily prayers of gratitude and forgiveness amid the suffering and pain he endured may be a tough act to follow. But we can try.

Christmas must, first and foremost, be a time of reflection. It’s a time when we must look deep into our hearts first before seeking happiness from, or blaming others. We are in this world together. Joy and pain is upon all of us and it begins with our own thoughts and actions.

How will our self-serving nature always affect others? How can we ease each other’s pain and misfortune? An act of prayer is a prayer for action. How can we make this world a better place?﻿﻿﻿ This maybe the true meaning and the paradox of Christmas and it’s up to us to build the courage and figure it out, then act on it...