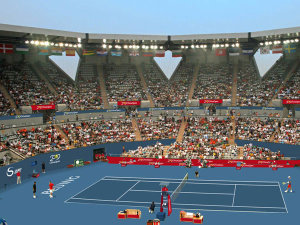 The 16th edition of the China Openis part of the ATP 500 Series of the 2014 ATP World Tour, and of the Premier Series of the 2014 WTA Tour. Both the men's and the women's events will be from September 28 till October 5, 2014 at the Beijing Olympic Green Tennis Center, purpose-built for the 2008 Olympic Games, is the venue for the China Open. In 2011, the venue expanded to an 11-court stadia as it boasted a new 15,000-seat Stadium with a retractable roof, named the Diamond Court due to its likeness.

Nadal Back in Hunt, def Gasquet in Opener; Serena into 3rd Round, Radwanska, Bouchard Ousted 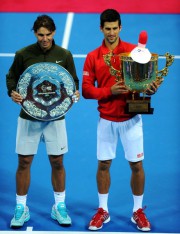 chinaopen.com.cn October 06 2013 Beijing – Rafael Nadal praised Novak Djokovic for the victory paying respect to the excellent play of his opponent. "To play Novak when he's playing well, if you are not playing almost at the perfect level, it's very difficult to win," Nadal said. "Probably the conditions of this court, this ball, were more favorable for him than for me. He did very well. He played a great match." Djokovic was nearly unbeatable while serving on Sunday afternoon, notching a staggering 91 percent first serve win percentage. The 26-year-old didn't drop a serve all match, leaving Nadal reliant on his serve, which lacked consistency throughout the contest.