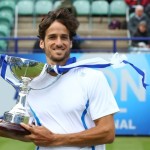 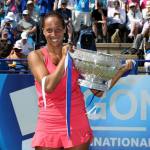 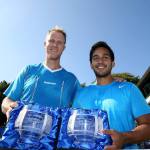 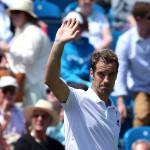 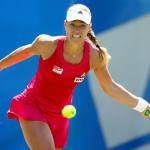 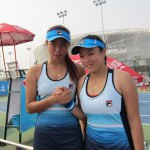 lta.org.uk June 21 2014 Eastbourne, England - Feliciano Lopez claimed the 2014 Aegon International trophy after a 6-3, 6-7(5), 7-5 victory over Richard Gasquet. The 32 year-old Spaniard retained his title in two hours and 13 minutes against the world No.14 French player. Madison Keys was crowned the 2014 Aegon International champion after a 6-3, 3-6, 7-5 victory over Angelique Kerber. The 19 year-old American claimed her first WTA title after one hour and 56 minutes against the world No.9 German player.

Philippines' Treat Huey and Great Britain's Dominic Inglot won twice on Friday to claim the Aegon International doubles crown, including an upset of top seeds and defending champions Alexander Peya and Bruno Soares 7-5, 5-7, 10-8 in the final. Unseeded Hao-Ching Chan and Yung-Jan Chan of Taipei completed their amazing doubles run at the Eastbourne Aegon International with a 6-3 5-7 10-7 victory in the final over former World No.1 Martina Hingis of Switzerland and Italy’s Flavia Pennetta.

Formerly the International Women's Open, Britain's biggest international women's event joined forces with the ATP World Tour to host a combined men's and women's tournament at Devonshire Park, 100 yards from the Eastbourne seafront, in 2009. The WTA at Devonshire Park in Eastbourne could not be told without Martina Navratilova. She captured the tournament an astonishing 11 times, the second-most times any player has won a WTA event. Other all-time greats who took the title here include Tracy Austin, Kim Clijsters, Lindsay Davenport, Chris Evert, Justine Henin, Monica Seles and Virginia Wade.