Federer to Lead Switzerland in DC Semifinal in Geneva vs Fognini, Italy

daviscup.com: September 10 2014 - Eleven of the world’s Top 20 will be in Davis Cup by BNP Paribas action on 12-14 September after the ITF announced the official team nominations for the upcoming World Group semifinals, World Group play-offs and Zone Group ties on Tuesday. World No.3 Roger Federer heads the field after the late withdrawal of Novak Djokovic due to exhaustion, with the likes of reigning Australian Open champion Stan Wawrinka, world No. 6 Tomas Berdych, No. 7 Milos Raonic, No. 11 Jo-Wilfried Tsonga and US Open finalist Marin Cilic also all donning national colours in Davis Cup this weekend. Daily Updates

April 6  2014 Geneva, Switzerland - Roger Federer produced another classic performance to see off Andrey Golubev in the fifth rubber 76(0) 62 63 in Geneva to send Switzerland into the Davis Cup by BNP Paribas World Group semifinals for the first time since 2003. In Naples, Italy, Fabio Fognini was the architect of a stunning Italian comeback as the hosts won all six sets on the final day to defeat Great Britain 3-2 and book a place in the semifinals of the Davis Cup by BNP Paribas for the first time since 1998. Full Recap 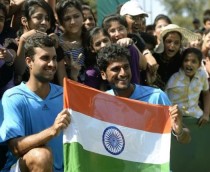 April 7 2014 ITS Staff - Uzbekistan won a thrilling 3-2 victory against China on the decisive day of their Davis Cup second-round Group I tie on Sunday held in Tianjin. India secured a spot in the Davis Cup World Group playoffs after rolling past South Korea 3-1 in their second-round tie in the southeastern South Korean city of Busan. Entering the final day with 2-1 lead, 2007 US NCAA singles champion Somdev Devvarman beat Lim Yong-Kyu, 6-4, 5-7, 6-3, 6-1, in the first reverse singles to clinch the tie for the visitors. Full recap

April 6 2014 ITS Staff Manila, Philippines – Pakistan’s Aisam Qureshi capped a strong rally in a Davis Cup victory for over highly-favored Philippine team after beating Patrick-John Tierro 6-2, 6-3, 3-6, 6-4 in the decisive rubber to complete a comeback win in the second round of the Asia Oceana tie at the Philippine Columbian Association indoor clay courts on Sunday. Full recap

Murray is congratulated by teammate Inglot. Photo by Susan Mullane

February 2, 2014 ITS Staff - In Asia/Oceania Zone Group I action, China, defeated New Zealand  3-1 with Wu Di getting the hosts off to a great start coming out on top against Michael Venus in five sets, 36 76(4) 62 16 63. In Indore, India, Yuki Bhambri and Saketh Myneni posted straight-set victories as India completed a 5-0 rout of Chinese Taipei in the first round. Read more 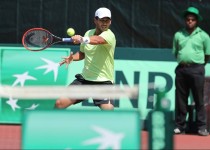 February 2, 2014 ITS Staff Colombo, Sri Lanka - Treat Huey gave the Philippines a 3-1 victory over Sri Lanka after the World Ranked No.21 ATP doubles star defeated the hosts No.1 player Harshana Godamanna 2-6, 6-4, 6-4, 6-4 in the first reverse singles rubber on Sunday. More inside