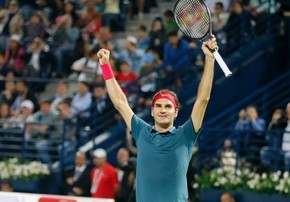 March 1 2014 ITS Staff Dubai, UAE – Roger Federer claimed his sixth Dubai title on Saturday after rallying from a set down to defeat Tomas Berdych 3-6 6-4 6-3.

It was the 32-year old Federer’s first tournament victory since Halle, Germany in June 2013, and only his second after winning Wimbledon two years ago.

Federer has beaten four out of 5 players in the top ten since the season began having won against Jo-Wilfried Tsonga and Andy Murray, then eventually losing to Rafael Nadal in the semis at the Australian Open. Now with back to back wins over Novak Djokovic and Berdych this week, the 17-time Grand Slam champion appears to be gaining confidence for another run at a major title.

In a post-match interview quoted by ATP World Tour, an elated Federer said, "I was happy I was able to use momentum, win that second set, and then it was a tough opening period in the third, wasting the love-40 game on Tomas's first service game, then saving break points myself. 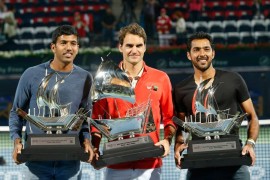 "Anything could have happened there. Things definitely went my way out here tonight, but I have had a lot tougher matches in the last one and a half years, so this is nice to get a lucky break again."

Federer, who lost to Berdych here in the semi-finals last year, also improved his head-to-head career match to 12-6 against the Czech star. Watch video highlights below.

Federer also registered his 78th career crown putting him third on the all-time list behind Jimmy Connors with 110, Ivan Lendl at 94, and just ahead of John McEnroe 77, Bjorn Borg and Pete Sampras with 64 titles each. Among active players, Federer leads Rafael Nadal at 62, and Novak Djokovic with 41.

In the men's doubles final, India’s Rohan Bopanna and Pakistan’s Aisam Qureshi upset the top-seeded duo of Daniel Nestor of Canada and Serbia’s Nenad Zimonjic 6-4 6-3 in 68 minutes. Bopanna and Qureshi broke their Canadian-Serbian opponents once in each set to take home their fifth team title.

Bopanna and Qureshi won the BNP Paribas Masters in Paris in 2011. Bopanna has now won 10 titles in 17 finals while Qureshi is 10 of 21.

Very happy @rogerfederer after his victory at #dubaitennis "Once you do get back it's important that you dont relax" pic.twitter.com/BYAKYYG8tr

Yeah so happy for ''The King''!!! Thanks for support for @rogerfederer ! #WinnerDubaï2014 pic.twitter.com/oBGwfyhWxJ 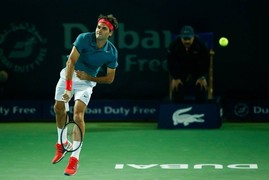 February 28 2014 ITS Staff Dubai, UAE – In what could be his best match since winning Wimbledon in 2012, Roger Federer stunned defending champion Novak Djokovic 3-6 6-3 6-2 to reach the finals of the Dubai Duty Free Championships on Friday.

Federer, who is bidding for his fifth Dubai trophy, fell 0-3 in the first set but managed to find his rhythm taking the second set in just 37 minutes. (Watch highlight below)

In the decider, the 17-time Grand Slam stormed to a 4-1 lead breaking the Serb star twice with powerful backhand passing shots to the delight and frenzy of the packed stadium. From then on, Federer held on firmly twice to clinch the match in one hour and 46 minutes.

In a post-match interview, Djokovic lauded Federer for being the better player as the match progressed, “Great to him for coming back in the match. Congratulations. He deserved to win. He played in the second part of the match better and was more aggressive and played all around the court really well.

“You know, I dropped the service game in the third set, opening game, was quite bad service game for me,” Djokovic continued. “I started making unforced errors in second part of second set and wasn't just managing to move as well, and he felt that this is his opportunity, and he used it. You know, that's why he's a big champion.” 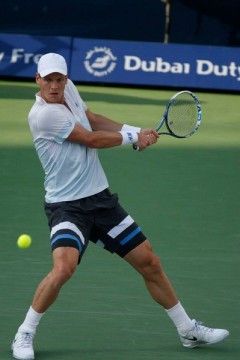 dubaidutyfreetennischampionships.com Berdych on a roll

Federer started his 2014 season at the Brisbane International where he reached the final losing to Lleyton Hewitt in three sets. The 32-year old former ball-boy of Basel Indoors reached the Australian Open bowing out to Rafael Nadal in straights after a quarter-final win over reigning Wimbledon champion Andy Murray.

In an earlier match, No.6 seed Tomas Berdych defeated Philipp Kohlschreiber 7-5 7-5 to reach his second straight final in Dubai. Having won his last tournament two weeks ago in Rotterdam, upped his winning streak to eleven matches.

The Czech star, who lost to Djokovic in last year’s finale, also improved his head-to-head career match 8-1 against the German who was serving for the first set at 5-4 but could not close out allowing Berdych to regain control and secure the win in one hour and a half.

Asked about playing Federer in the final, Berdych says, “I like playing with Roger, it’s something special. It’s a celebration of the game.”

As for Federer's reason for his semi-final win? He tweeted, "Super happy for my team FC Basel, this gives me the right motivation for my semi-final match in the morning." 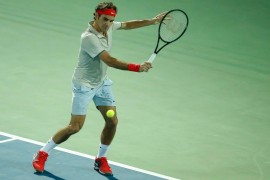 dubaidutyfreetennischampionships.com Federer was brilliant on Thursday

It is the first time that Kohlschreiber has advanced beyond the second round in his six appearances at the event. The number seven seed looked the stronger player right from the start, breaking his opponent’s serve at love to lead 2-0 before breaking again for the first set. Jaziri held Kohlschreiber at bay in the second set until again conceding his serve to love at 4-3.

Federer was broken in his first service game falling behind 0-2 but broke back en-route to winning twelve of the next 14 games breaking his Czech opponent five times and wrapping the match in just 58 minutes. The 17-time Grand Slam champion has 16-15 win/loss record against Djokovic.

In an earlier match, No.3 seed Tomas Berdych, winner of Rotterdam two weeks ago, defeated No.5 seed Jo-Wilfried Tsonga 6-4 6-3 to set up a semi-final clash with Kohlschreiber. The Czech star broke Tsonga once in each of the sets while saving five breakpoints he faced in the one hour and 28 minute match.

Who do you think will make it to the finals of #dubaitennis? Tweet your predictions! @rogerfederer or @DjokerNole? pic.twitter.com/IoUfRr0EI7 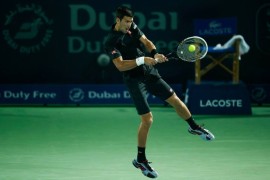 Just last week he was playing in the semi-finals of a Challenger event in Mexico, but his form there and in reaching an earlier final in Dallas attracted the attention of Dubai Tournament Director Salah Tahlak.

Devvarman was also the recipient of a wild card following his victory at a Challenger event in Delhi last week, but he felt he was unable to match his opponent on the court today. Jaziri will now face seventh seed Philipp Kohlschreibe who defeated Andrea Seppi 6-3 6-3. 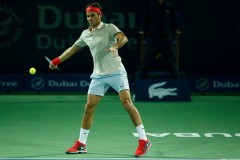 dubaidutyfreetennischampionships.com Federer came back strong to win in 3 sets

Fourth-seed Roger Federer came back from 0-2 down in the final set to defeat Czeck star Radek Stepanek 6-2 6-7(4) 6-3 in two hours and 9 minutes at the ATP World Tour 500 hard-court tournament.

If Federer beats Rosol, he will possibly meet defending champion and top-seed Novak Djokovic in the semi-finals. Bidding to win his fifth Dubai title, the 6-time Grand Slam winner crushed Spain’s Roberto Bautista 6-1 6-3 in just under one hour. 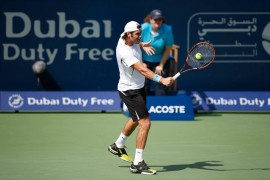 Djokovic was broken once but dominated the entire match breaking the Spaniard five times setting up a quarter-final clash with No.6 seed Mikhail Youzhny. The Russian beat Great Britain’s James Ward 6-1 7-6(3).

Third seed Tomas Berdych also won, beating Sergiy Stakhovsky 6-2 6-1 and he will now face fifth seed Jo-Wilfried Tsonga, who received a walkover into the quarter-finals when Nikolay Davydenko withdrew with a rib injury. 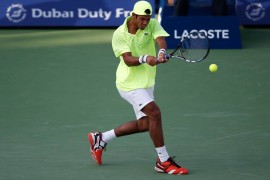 The 26-year old World No.2 broke Istomin three times and saved four breakpoints he faced in the one hour and 24 minute match setting up a second round meeting with Spain’s Roberto Bautista.

In his first tournament since losing to Stanislas Wawrinka in the quarter-finals of the Australian Open last month, Djokovic is bidding for his 5th title in Dubai winning in 2009 – 2011 and last year’s crown over Czech star Tomas Berdych who also advanced with 6-3 6-4 victory over Romanian qualifier Marius Copil. Berdych extended his winning streak eight matches since taking the Rotterdam title two weeks ago. 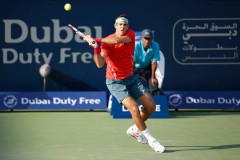 Juan Martin del Potro, No.2 seed, had to retire in his opening match against former US NCAA singles champion Somdev Devvarman of India after dropping the first-set tiebreaker 7-6(3).

The Argentinian started the year winning the Sydney International in January but has been plagued with an injury on his left wrist. After winning the 2009 U.S. Open, Del Potro was operated on his right wrist forcing a long lay-off from the tour.

“My wrist is hurting a lot and it was really tough to play today and I tried everything, but it's very difficult play like in these conditions, you know, playing slices or I cannot be the player what I would like to be,” said Del Potro.

“It's hurting all the time, it's sometimes less and sometimes little more. But it's hurting, and I have been in contact with my doctor all the time. He's trying to keep me motivated to keep playing, but I know what it's my limit playing on court. Today was enough. I have been doing a big effort to play this tournament, and it was not enough to play what I like to play.” 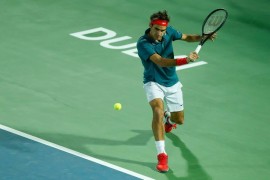 The 17-time Grand Slam champion is eying his 6th Dubai trophy having won the tournament 2003 – 2005, 2007, and 2012. In the second round, Federer awaits the winner of the match between American Michael Russell and Czech star Radek Stepanek. (Watch amazing Federer shot below)

In other first round matches, Dmitry Tursunov also reached the second round with a 7-5 6-1 triumph over qualifier Lukas Lacko. He was joined by Roberto Bautista Agut, who sped to a 3-0 lead against qualifier Adrian Ungur and continued his momentum to a 6-1 6-3 victory, earning him a likely second round meeting with top seed and defending champion Novak Djokovic.

He was joined by Roberto Bautista Agut, who sped to a 3-0 lead against qualifier Adrian Ungur and continued his momentum to a 6-1 6-3 victory, earning him a likely second round meeting with top seed and defending champion Novak Djokovic.