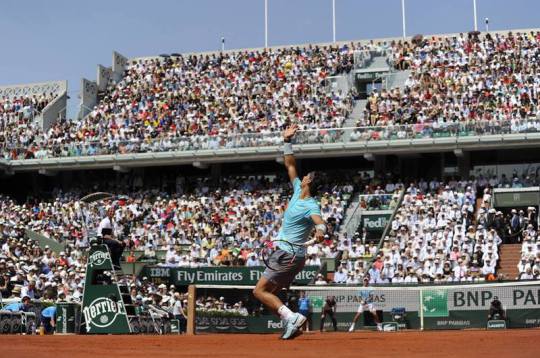 DAY 7: Nadal, Ferrer, Monfils into Round of 16s; Halep Sets 4th Round Clash with Stephens

DAY 5: Nadal, Murray, Gasquet into 3rd Round; Order is Restored in Women's Draw

The tournament is an event run by the International Tennis Federation (ITF) and is part of the 2013 ATP World Tour and the 2013 WTA Tour calendars under the Grand Slam category. The tournament consists of both men's and women's singles and doubles draws as well as a mixed doubles event. The tournament will be played on clay courts and will take place over a series of twenty courts, including the three main showcourts, Court Philippe Chatrier, Court Suzanne Lenglen and Court 1.

Spain's Rafael Nadal is the defending men's singles champion, while Serena Williams is the holder of the women's title. Along with the Australian Open, Wimbledon and the US Open, the French Open is one of the four historic tennis tournaments which make up the legendary Grand Slam. The term dates back to 1933, when Australian Jack Crawford managed to win the Australian Internationals, Roland Garros and Wimbledon. With the US Internationals fast approaching, New York Times journalist John Kieran wrote that if Crawford won this fourth title, "he would achieve on court the equivalent of a countered and vulnerable grand slam in bridge". Crawford lost in the final to Britain's Fred Perry, but the name was to go down in history.

Very few players have won the Grand Slam; Donald Budge (1938) and Rod Laver (1962 and 1969) are the only men to win all four tournaments in the same year, and Margaret Court (1970), Maureen Connolly (1953) and Steffi Graf (1988) the only women. The task is even more difficult nowadays with the four tournaments all being played on different surfaces: Plexicushion in Australia, clay at Roland Garros, grass at Wimbledon and Decoturf at the US Open.