US Open contenders for Men's Singles 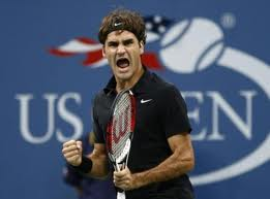 New York - Roger Federer, Rafael Nadal, and Novak Djokovic  have a total 32 Grand Slam singles titles between them within the last decade.  Could this year’s US Open men’s singles championship crown a player other than the Federer, Djokovic and Nadal? Rafael Nadal is still ailing from a knee injury and has dropped out.

After the highs of his Gold medal win at Wimbledon where he beat Djokovic in the semis and Federer in finals, Andy Murray is one of the favorites to win this year’s Open. Could Murray pull another brilliant back-to-back performance against the world’s top two players? This time though Murray will meet Swiss Meister in the semis before facing  Djokovic. Who else could make a surprise win?

In 2009, Juan Martin del Potro broke Federer’s dominance of the US Open by beating the 5-time winner in the finals, and having also won the Bronze medal by beating Djokovic at Wimbledon Olympics, maybe able to repeat as champ.

There is Jo-Wilfred Tsonga. He reached the final of the 2008 Australian Open, losing to Novak Djokovic, and has three major semifinals appearance.  A quarterfinal showing last year was his best in four appearances in the season-ending Grand Slam. Tsonga has a big serve and a powerful forehand and very aggressive.  All eight of his career titles were won on hard-courts.

David Ferrer, 30, is also a favorite. Winning 16 career titles, the Spaniard has reached the semifinals of majors three times,  the 2007 U.S. Open, the '11 Australian Open and the '12 French Open.  Ferrer's best showing at Flushing Meadows was in '07, when he reached the semifinals. The last two years, his run ended in the fourth round. He is one of the fittest players and is a good retriever outlasting most of his opponents.

John  Isner, 27, has 4 career tour titles but no major titles. His best showing was a quarterfinals in 2011 US Open bowing out to Murray, but could be the dark horse of the tournament. The 6-9, 10th ranked player has a tremendous serve and is capable of over-powering anyone on any surface. The hard-courts will give him the edge.