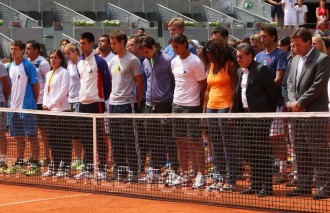 May 6 2013 Beeyong Sison - When the ATP World Tour announced on Friday their CEO and Chairman Brad Drewett had passed away, it was one of the saddest day in the world of tennis – ever. Brad died at home in Sydney after battling with motor neurone disease.

I first met Brad in January 1981 in ATP Adelaide during the Australian circuit as a strapping young Aussie lefty who just moved up to the men’s tour level after a successful junior career. Brad finished runner-up that week, which included an upset win over No.1 seed Ross Case, just falling short in his first pro title quest to 1976 Aussie Open champion Mark Edmondson 7-5 6-2.

I got knocked off in the round of 16s but stayed on and got to watch Brad play the finals. It was nationally televised so my brother Mario and wife Heidi, who lived in Melbourne, also got to watch me play, live, against Australian Davis Cupper Syd Ball, who also coached Brad, at the historic Memorial Drive Park grass courts.

It was an exciting time for Australian tennis as Brad led a young crop of future Aussie stars - Pat Cash, John Fitzgerald, Wally Masur, Chris Johnstone, and John McCurdy. They were ready to fill their elders' shoes - veterans Edmondson, Ball, Case, Geoff Masters, and Colin Dibley. That week, at least, both generations were represented in the finals.

The following year in 1982, Brad won his first ATP tour title in Cairo, then posted his second in New Jersey in 1983. Brad had won the Australian Open Junior title twice, in 1975 and 1977 becoming the youngest player at age 16 to win the title since Aussie greats Ken Rosewall and John Newcombe.

I was impressed by his deft touch and intelligent play using the wooden Dunlop Maxply racket. On the court, I thought he appeared like Rod Laver except he wore his hair longer, curly blonde locks hanging behind his shirt collar. He was a rising star then as throngs of teen-age girls followed him around the grounds. I never got to play against him but he always asked to hit with me, since I'm a fellow lefty, every time he needed to prepare for his match against another southpaw.

When the tour moved on to Europe, I spent some time with him in Paris after workouts. What impressed me most was he never talked about himself but wanted to know how I was doing. He made me talk more while he listened. To others then he seemed aloof and distant on the outside, but alone with him and away from the courts, he was thoughtful and considerate.﻿

It was in 1999 when I spoke again to Brad by telephone. The planned ATP tennis center in Malaysia he was over-seeing had just fallen through due to local political constraints under Prime Minister Dr. Mahathir. After learning the news, my late-friend Ajay Pathak who was head of ITF juniors in Asia, suggested that I immediately get in touch with Brad. Heeding the advice, I wrote Brad about my own plans regarding the Subic tennis center project in Manila and needed to put together a feasibility study.

Within minutes upon receipt of my letter, Brad was on the phone saying only a few words. “G’day mate. Expect a package within three days. Later mate.” When he spoke, it seemed as if we saw each other on a daily basis.

Sure enough, after two days the proposed plans and a stack of documents arrived as promised. I included most of the information Brad provided to my presentation to then Chairman Felicito Payumo and to the SBMA Board. Payumo, a Harvard-trained and tennis enthusiast whose son Tonito played the French juniors in the 80s, eventually approved and got the tennis facility completed in 2002. Another Aussie-mate Wimbledon champion Pat Cash visited the center in 2004, photo below.

Although not in the same standard as the ill-fated Malaysian project, Subic is the first government-funded tennis center that is open for public use since Rizal Memorial tennis courts in Manila. The Rizal court complex was constructed in 1936 under Dwight Davis. Davis, donor of the famed Davis Cup, served as the Philippine governor-general under the American commonwealth in 1929.

Hence, I was not surprised when Brad took over the helm of the ATP tour after a period of continuous growth serving as ATP vice-president for the Middle East, Asia and Pacific regions from 1999 onwards. He was tapped as the ATP Chief Executive Officer for the International Group in January 2006 before becoming the ATP Chairman and President in January2012. He was a sponge and extremely focused. Like his volleys, he had a great feel for people too.﻿ 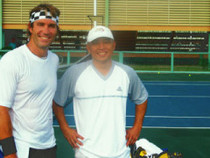 The players paid their respects and observed a one-minute silence for Brad. Last Saturday, the tournaments at the Portugal Open in Oeiras and the BMW Open in Munich also honored him and observed a moment of silence that was nationally broadcasted live.

Quoted by the ATP World Tour, Federer, who worked closely with Brad, said, "Obviously Brad wasn't just the president of the ATP but was a player himself, a board member. He's given so much time and effort to the ATP, and I think this is really what we will try to honor in a small way today. Then obviously, I think many more players got to know him through his position in the last one and a half years. He was always very nice to work with. Very honest.  Very nice. Gentle. I've really enjoyed every step of the way working with him. For me, it was hard seeing him not be the same anymore towards the end physically. But we can only appreciate what he's done for us and what he did until the last moment he really possibly could. That will never go away. I'm sure that the ATP and the players will come up with something for the legacy of Brad Drewett. It's very important."

Nadal: “The only thing we can do is say thank you for everything he has done for our sport, all the support, and all the good things he has done these years to help us and to help us to have a better sport. I just give all my support from here to his family and all his beloved and close friends. I think he was a very loved person inside our circuit. It's a sad moment for all of us.”

Djokovic:  "It's very sad. My condolences to his family. It’s devastating news for not just us tennis players, but the tennis world. He was a very brave man with the courage to stand up and try to change some things in our sport for the better. We remember him as a very calm, composed and intelligent man, who loved this sport with all his heart, while he was playing, coaching and then as the president of ATP. So I wish his family all the best and to be strong in this sad moment."

Murray: "I think it was a shock for everyone. We heard the bad news in Australia with his diagnosis. I mean the end came extremely quickly. I knew him a little bit as a person. I spent a bit of time with him over the past couple of years. The players got on well with him. We had a lot of meetings with him, spent a lot of time speaking to the Grand Slams with him and he was an extremely nice person. It's sad obviously for the whole of the tour to have to see that, but hopefully he’s in a better place now."

On behalf of the ITS family, we mourn the loss of a good friend, a talented player as well as an administrator. A fine gentleman whose legacy will be remembered for many years to come. Thanks to your tireless work and energy. Brad, you will be sorely missed...﻿later mate...