Simply the best 'ever'

Murray was trying to become the first British to win the coveted trophy at Wimbledon since 1936 when Fred Perry last did it also winning in 1934 and 1935. Although not in the same year, Perry was the first player to win all four Grand Slam singles titles – a “Career Grand Slam" at the age of 26, remaining the only British player ever to achieve this.

With the victory, Federer will reclaim the No.1 ranking he lost since May, 2010 equaling not only Pete Sampras’ seven Wimbledon singles wins but also the record of his childhood hero of 286 weeks as World No.1. Sampras is second at owning the most Grand Slam titles at 14. 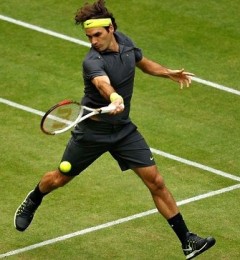 RF will try to add an Olympic Gold in singles to his resume' but this time the 17-time Grand Slam champion won't have to wear white. getty images / nytimes.com

Federer’s and Bjorn Borg’s five consecutive triumphs are considered a record in the modern era. It was only in 1922 that ‘The Championships’ started making the reigning champion play the main draw making it tougher to defend.

In addition to his phenomenal record, Federer's finals feat gave him 244 Grand Slam match victories, for the most Grand Slam wins in the Open Era. Jimmy Connors is second at 233 and considering it was accumulated until he was 40 years old. At 30, showing more smarts and court savvy than ever before, the Bottmingen-raised Swiss Meister is not finished yet as he is still poised to play at a high level for the next five years even more.

Meanwhile the fourth member of my 21th Century “Musketeers’ and playing the role of D’Artagnan, Murray, who was two sets away from ending one of the longest droughts in British sports, is now recorded as the first British men’s finalist in 74 years.

He is yet to win a Grand Slam tournament to join the elite group of Federer (Athos), Rafael Nadal (Porthos), and Novak Djokovic (Aramis) all of whom have now won a total of 33 Grand Slam titles.

With Ivan Lendl now as his mentor, Andy Murray will definitely win a Major tournament in the next year or so. The Scot is right to say, “I am getting closer”. As he stood at the Center Court and voice cracking during the presentation, the new British darling paid a classy tribute to Roger Federer, “not bad for a 30 year old”. 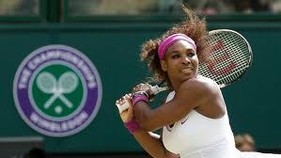 It’s great to see Serena Williams back on the court since returning from a year of physical health problems just before last year’s Wimbledon. Her talents were again shown on Center Court winning the coveted Wimbledon Ladies Singles tying her sister Venus for her fifth title and 14th Grand Slam crown of her career.

Serena, who repeatedly had to undergo a series of health scare that kept her from playing tennis, overcame Agnieszka Radwanska of Poland 6-1, 5-7, 6-2. Her punishing ground strokes and dominant game was on display on Saturday. Williams boomed 17 aces in the finals, bringing her tournament total to 102, an all-time record for women, bettering her own record of 89 from 2010.

Due to a broken glass, she cut both her feet on while leaving a restaurant in Germany. She needed two operations on her right foot. Then she got blood clots in her lungs, for which she needed to inject herself with a blood thinner.

Those shots led to a pool of blood gathering under her stomach's skin, requiring another procedure. Serena, who at 30 years old is also the first 30-something to win Wimbledon since a 33-year-old Navratilova won her ninth title here in 1990, couldn’t help from crying during the awarding ceremony as hugs from her parents and sister-partner Venus were bracing in. Serena and Venus now have ten titles of the past 13 trophies.

The Sister Act team of Serena and Venus defeated Andrea Hlavackova and Lucie Hradecka 7-5, 6-4 to take their 13th Grand Slam doubles title and their fifth title at Wimbledon since 2000. > Complete Wimbledon Results and Scores 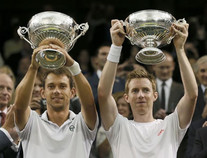 Marray, not Murray, is the first British man to win a title at Wimbledon since 1936, in doubles. Marray and Nielsen became the first men's wild card pair in Wimbledon history to capture the doubles title. They beat four tough seeded teams including a shocking upset against defending champions Bob Bryan and Mike Bryan in the semifinals.

Meanwhile, Lindstedt and Tecau lost in the men's doubles final for three straight years. They are the second team in the Open Era to lose in their first three Wimbledon finals since Bob Lutz and Stan Smith failed in 1974, 1980 and 1981.