August 27, 2011 - I recently attended the Cincinnati Masters Series tournament at the Linders Tennis Center in Mason, Ohio.  All the "name" players were there on both the Women's and Men's side as they worked to get in their last minute match preparation for the US Open.

From a fan's point of view you can't beat this tournament.  It is basically like watching the US Open without having to travel to New York City.  Less crowds, cheaper ticket prices, more intimate venues... what's not to like?

For my money, early in the week is the best time to attend, and this belief was confirmed again this year after watching Fernando Verdasco lose to Rafeal Nadal 7-6, 6-7, 7-6 (10) over 4 hours in a Thursday morning match!

On the women's side I was cheering for Andrea Petkovic to make it to the finals as she was very impressive in taking out defending Wimbledon champion Petra Kvitova in the round of 16's.

However, a knee injury hindered her play in the semi's so the fans were denied the opportunity to see her 'dance' into the finals!  Reflecting on the three days I attended, I now understand why the players union is calling for more flexibility in their scheduling.  The road to the US Open has become more of a highway of nutrition.

The streets have many potholes, and if you do not manage your schedule on and off the court well, you can be too rundown to perform at your peak in the Open! ﻿﻿On the men's side Andy Murray won after Novak Djokovic retired with a shoulder injury.

The grind requires the top players to play almost continuously from the time they fly across the Atlantic from Wimbledon.  Another factor is the weather.

Yes it gets hot during the Australian Open, but that tournament is at the start of the season when players are still fresh and excited to get going. 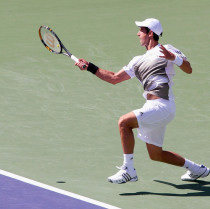 This year the weather at Cincinnati was by far the best it has been in years, but summer in many cities where these tournaments are being held can be brutally hot with high humidity!

A combination that when added to it being late in the season, can take away a players will to continue.  Along those lines, it always interests me to see which top players go out early in Cincy.

Win a few rounds then lose to get a few extra days rest to prepare for the final Grand Slam event.  I am not saying they throw their matches but they never seem to be too upset when it happens.

﻿In fact, I thought Djokovic looked ready to leave after both Federer and Nadal lost in their quarters, but Gael Monfils couldn't keep the ball in play after winning the first set, so the "Joker" moved on.

Hopefully, everyone who is hurting will heal quickly so they can be at the top of their game for NYC and the US Open.  But if they aren't, let's not place all the blame on the players, the schedule might need to be tweaked!