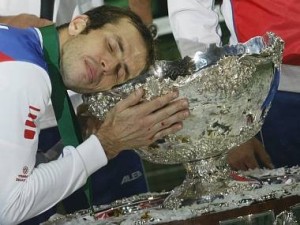 Radek Stepanek celebrating his most important victory for the Czech Republic. Photo by Martin Divisek, denik.cz

Warrior, worker, team player and a great patriot, Radek Stepanek, who will celebrate his 34th birthday in eight days, became the second tennis player in Davis Cup history to win a decisive fifth rubber older than thirty years of age. British player James Parke did it 100 hundred years ago.﻿

The newest Czech national hero hauled in the biggest catch of his career last Sunday clinching the fifth and final rubber over Nicolas Almagro of the defending champions Spain 6-4 7-6(0) 3-6 6-3, bringing home the most coveted trophy in the world of tennis – the Davis Cup punch bowl.

It was the first title for the Czech Republic as an independent nation since being separated in 1993 from Czechoslovakia who won the title in 1980 led by Ivan Lendl, Tomas Smid, Pavel Slozil, and Jan Kodes.

According to Stepanek, “I came to the court with the mind-set that I had to stay calm, hungry, motivated, concentrated and always know what I was doing. I did that tremendously well today. The team of 1980 was our inspiration and our idols. They’ve been with us here. They are the legends and we are joining them.”

"I dreamt about it all my life. I lived for this trophy for years now it is time to celebrate. After our loss in the 2009 to the same team, Tomas and I promised ourselves to dedicate our energies to win the trophy,” Stepanek was referring to the Davis Cup finals when they were swept by the Rafael Nadal-led Spanish team 5-0.

Now, in the autumn of 2012, before their home arena, Stepanek and Berdych finally completed their mission. The victory also recorded the first that time a nation has won three titles - the Hopman Cup (Mixed), Fed Cup (Women), and the Davis Cup (Men) in one year.

“Like, I'm living in a dream. We worked for this moment very hard, we did everything for this success. I'll always remember it. We always stuck together as a team. It does not matter if I win or points Thomas, the main thing is that we as a team had three points,” continued Stepanek when asked the secret of the team’s success.  I don’t complain, we play all three days. We have guys who cover our backs, we have a team that does for us first and last.”

After losing the pivotal doubles rubber on Saturday to fall behind 1-2, Spain’s David Ferrer brought the tie back on equal terms by demolishing Tomas Berdych 6-2 6-3 7-5 in the reverse fourth rubber earlier keeping his Davis Cup singles record undefeated in 2012. The 30-year old Valencian also registered his ATP Tour match win No.76 of the season – best in 2012.

Stepanek, who is twenty six places ranked below No.11 Almagro, was the clear underdog but was able to use his vast Davis Cup experience mixing different shots and attacking the net on every opportunity. Both players held serve until the tenth game when Stepanek, known more as doubles specialist, broke Almagro to take the first set to the cheers of the raucous but orderly O2 Arena crowd.

Almagro stormed back in the second set breaking Stepanek for a 3-2 lead but could not hang on as the 27-year old native of Murcia squandered several opportunities. Almagro saved three set points en-route   to the tiebreaker. Stepanek, though, was too clever for his Spanish opponent, who is more at home on clay courts, when he took control of the points by being more aggressive attacking the net using the low-bouncing fast hard-courts to his advantage winning the breaker 7-0 for a two-set lead.

In the third set after an emotional let-down that normally sets-in in Davis Cup play, Stepanek found himself a break down after squandering a 0-40 break point opportunity on Almagro’s serve to start the set. Stepanek eventually yielded the third but immediately raced to a 3-0 lead in the fourth set when he elevated his game behind brilliant serves and fine volleys eventually closing the match on the second match point when Almagro drove his backhand into the net.

Asked what he did to prepare for his match when Berdych was losing to Ferrer, Stepanek said, “I confess to you that I was nervous and scared. I even had to leave the hall for an hour and I was at home where I relaxed. I knew that it is a lot more important match I've ever played. Ever since that time we have won in Argentina, subordinating everything I do, I was ready for the final. I dreamed about it all my life.”

“I tried to take it like any other game. With the coaches we discussed tactics, but in these duels, more important than the tactics is the will to win and ability to resist pressure. That's what I did.”