Australian Open Quote of the Week 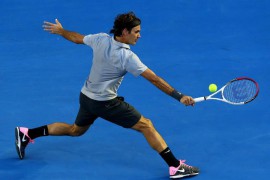 During the warm-up introductions, in what will probably be considered the quote of the week, the Queenslander mumbled to himself, “Oh, crap, it’s Roger.”

Fresh from winning his first career ATP title in Sydney exactly one week before and having beaten World No.1 Novak Djokovic in Perth, Tomic was flying high with confidence coming into third round of the Australian Open.

After all the hype and pomp leading up to the match, within a few minutes, the moment suddenly turned to a quick reality check.  Having elected to receive after winning the toss, Tomic immediately found himself down a break looking at an up-hill battle after only playing half a dozen points. 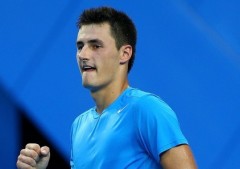 It was his first service loss of the tournament, and in an instant, it dawned on the young Australian that he was up against someone considered as the world’s best tennis player ever.  ﻿

The last Aussie in his home Grand Slam was sent back to earth going down in straight sets 6-4 7-6 6-1. It was Tomic’s second loss from Federer at Melbourne Park after being eliminated in the fourth round last year also in three sets.

In a post-match interview, Tomic said, "I elected to serve considering I was serving really well the last few weeks. The first service game was important and I lost it. When you play these sort of players like Roger or Novak, you lose belief before you get into the match.”

Tomic continues, "I got in there and started to think after they mentioned all these grand slams -- Wimbledon champion six times, six times US Open champion. Then I was, 'Oh, crap, it's Roger'.  I tried to block out who was on the other side of the net but I couldn’t do it after the announcement."