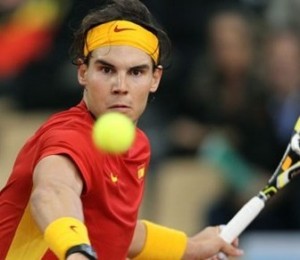 The "King" has returned. Photo from daviscup.com

February 6, 2013, Beeyong Sison: Vina del Mar, Chile - The long wait is over. Eleven-time Grand Slam champion Rafael Nadal is finally back on the tennis court after seven months due to a knee injury.

Nadal played his first singles match on Wednesday at the VTR Open in Vina del Mar with a 6-3 6-2 win over Argentina’s Federico Delbonis 6-3, 6-2 in the second round.

Nadal, who will turn 27 this week, competed for the first time since Wimbledon and the Mallorcan looked unhindered on the court as he was cheered on by 5,000 spectators packed at the center court of Naval Club Las Salinas.

Nadal fell immediately behind 2-0 but quickly recovered by breaking Delbonis back in the fourth game to level at 2-2 after several long rallies that got him into a rhythm.  He then won ten of the next 11 games to win the first set and race to a 4-0 lead in the second. He cruised on to win the match in one hour and 27 minutes.

Monaco, however, was stunned by Frenchman Guillaume Rufin, 7-6 (7-3), 6-4, in the second- round. Monaco beat fellow Argentine Carlos Berlocq in last year's Vina del Mar finale and was also a runner-up at this tournament in 2008 and 2010.

So severe the injury that the “King of Clay” dropped down to No.5 in the latest ATP ranking behind Djokovic, Roger Federer, Andy Murray, and David ferrer, and was sorely missed during the fall tour dropping out from the ATP Tour starting at the US Open, the year-ending World Tour Finals in London, and the Australian Open two weeks ago. Most importantly, Nadal could not defend his Olympic (Beijing) Gold Medal title in London held at Wimbledon last July won by Murray. This weekend he is also absent from the Davis Cup Finals against Czech Republic.

Nadal led the Spanish Davis Cup team that won the finals in 2004, 2008, 2009 and 2011. In last month’s interview, Nadal said he was not going to rush coming back onto the grueling tournament schedule as he will make sure that once he plays again, he is there to stay. Nadal said that the injury is not career ending and that he just wanted to make sure the “tendonitis ailment” would not be aggravated, insisting that he we will back stronger than ever.

Judging from the way he approached his rehab, the Spanish star plans on winning more Grand Slam titles in the future which he stopped short of predicting. Two weeks before crashing out of Wimbledon, Nadal set an all-time record of seven French Open titles when he defeated Djokovic in the finals at Roland Garros. Nadal’s level of competitive drive has been so dominant in his stunning career that every point he plays gives an observer the impression that it’s the last point of the match. His opponents are made to work as if they have to win each point several times over.

In 2010, Nadal completed a Career Grand Slam by winning the US Open becoming the seventh player, and the youngest, in history to achieve the feat. He is only the second male player to complete the Career Golden Slam (Career Grand Slam plus an Olympic Gold) after Andre Agassi. Together with Roger Federer, he has won a record 21 ATP World Tour Masters 1000 tournaments.﻿

Looking forward to seeing Rafa healthy and fierce as ever....﻿