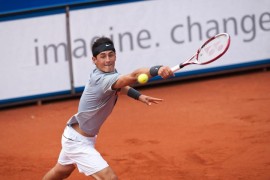 What to do with over-zealous and violent parents. Last week, John Tomic, the father of Australian tennis player Bernard Tomic, was charged with assaulting his son's practice partner, Frenchman Thomas Drouet, after allegedly head-butting him near their hotel before last week's Madrid Open. Drouet said he was left with a broken nose and temporarily needed a neck brace.

According to press reports, a Madrid court on Monday has postponed the trial of Mr. Tomic. A hearing was scheduled for Tuesday but was reset for October due to Drouet being unable to attend. The court granted the elder Tomic permission to leave the country but will be required to return when a new date for the hearing is set. The No.52 ranked Bernard Tomic, who won his first title in Sydney in January, has withdrawn from this week's Italian Open in Rome.

It’s nice to know, though, that former Australian players are rallying behind Bernard to ensure the young player has the support he needs.

According to Tennis Australia, Australian Davis Cup Coach Josh Eagle was in Madrid to provide Bernard with any assistance he required and that, “the biggest names in Australian tennis are also ready to assist the Australian No.1.”

Multi-Grand Slam titlist Todd Woodbridge, Tennis Australia’s Head of Professional Tennis, was quoted by AAP saying,  “The key for us in this whole thing is making sure that Bernard’s welfare is being taken care of.  Bernard’s got a really good relationship with Tony Roche, who’s become a really good mentor. And although there’s been some stuff written about Pat (Rafter) and Bernard, they really came together at the last Davis Cup tie in Namangan against Uzbekistan in April.” 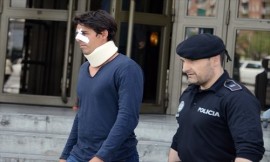 Drouet, a hitting partner on and off the courts. Photo: globaltimes.cn CFP

Meanwhile, the ATP Tour suspended John Tomic’s credential privilege at all ATP events. On May 8, the ATP released the following statement, “Following last week’s incident in Madrid concerning John Tomic, and the ensuing investigation, Mr. John Tomic’s credential privileges have been suspended at all ATP tournaments until further notice.  The ATP’s investigation into this incident remains on-going.”

I am sure John Tomic has done a really great job getting his son to where he is now. But clearly, he has become too much of a distraction and a hindrance to his 20-year old son’s future development. It’s time to cut the parental umbilical cord and set the young Tomic free.