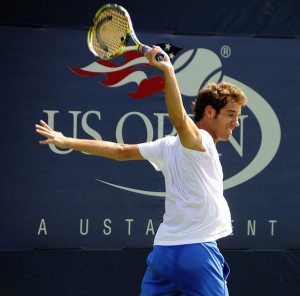 Two Serbs, two Spaniards, and two French are in the Top 10 at the end of the season. Novak Djokovic took the season-ending No.1 ranking for the second consecutive year after regaining the top spot from Roger Federer last month.

In July, the Swiss Meister won his seventh Wimbledon crown registering his historic milestone of 302 weeks as World No.1 until Paris Bercy when he was dethroned by Del Potro in Basel. Federer came away with six titles for 2012.

Djokovic finished the year as the top-ranked player thanks to a successful end of the season. The Serb star validated his No.1 position from the previous year winning the Australian Open in January then culminating with a spectacular performance defeating the 17-time Grand Slam winner Federer at the ATP World Tour finals. He won six titles including four Masters level in Miami, Toronto, Beijing, and the Shanghai Masters.﻿

At No.3 is Andy Murray of Great Britain made history after winning the Olympic Gold at Wimbledon then copping his first Grand Slam crown at the US Open ending a 76-year drought becoming the first British player to win a Grand Slam title since Fred Perry did it last in 1936, also at the US Open.

Number four ranked is eleven-time Grand Slam champion Rafael Nadal had to take a prolonged absence due to a knee injury sustained during Wimbledon where he was eliminated by Lukas Rosol of the Czech Republic last June 28. The 26 year old former World No.1, considered as one of the greatest players of all time, will resume on-court training to prepare for an exhibition match in Abu Dhabi followed by his first official ATP tournament in Doha.

At No.5 is David Ferrer who won on his first Masters 1000 title in Paris at the end the of October by beating Jo-Wilfried Tsonga in the quarterfinals, Michael Llodra in the semifinals, and Jerzy Janowicz in the final. The win was also his seventh ATP Tour-level title of the year, the most of any player in the 2012 season. He also won more matches this year than any other player with 75 victories. Hi victories include Valencia  (Indoor/Hard) , Bastad  (Outdoor/Clay), s-Hertogenbosch  (Outdoor/Grass), Acapulco  (Outdoor/Clay), Buenos Aires (Outdoor/Clay), Auckland (Outdoor/Hard)

Like in 2010, Tomas Berdych  finished the season at No.6, matching his career best ranking. He has two wins against the top five players in the world ( Andy Murray in Monte Carlo and Roger Federer in New York) Together with Radek Stepanek, Berdych led the Czech Republic to a historic Davis Cup victory unseating Spain in the Finals.

After a year in a half recovering from a wrist surgery, Juan Martin Del Potro is back in the world’s top ten at No.7. His first breakthrough of the season took place at Wimbledon when he won the Olympic bronze medal beating Novak Djokovic . The winner of the 2009 U.S. Open will be entering the 2013 with good momentum having beaten Roger Federer twice in the round-robin ATP Finals and at the Swiss Indoors in Basel.

Jo-Wilfried Tsonga ends in the World Top 10 for the fourth time in five years at No.8. With 55 match wins in 2012, Tsonga won two ATP titles and reached the semi-finals at Wimbledon and also won the Metz title for the second consecutive year.

As in 2011,Tipsarevic finished the season ninth in the world. In addition to his title he won in Stuttgart, the Serb also had two highlights this year - a victory over countryman Novak Djokovic in the quarterfinals of Madrid and a quarterfinal finish at the U.S. Open losing in five sets to David Ferrer . He participated in the ATP World Tour Finals for the second consecutive year. At age 28, his goal next season is to reach at least the semi-finals of a Grand Slam for the first time in his career.

For the second time in his career after 2007, 26-year old Richard Gasquet finished the season tenth where he is accompanied by Tsonga. Since the creation of the ATP in 1973, this is the third time two French netters finished the season in th top ten since  1986 with Yannick Noah, No.4, and Henri Leconte, No.6; and in 2008 with No.6 Tsonga, and No.7 Gilles Simon. Gasquet surprised everyone by reaching the final of the Toronto Masters 1000 after victories over Berdych, Fish and Isner and then won the title in Bangkok in September.