Federer To Play Hometown Tournament in 2013 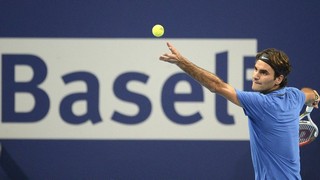 April 10 2013 Beeyong Sison - “I will play Basel even without a contract,” the 17-time Grand Slam champion said during an interview with Rene Stauffer quelling all rumors that he will miss this year’s Swiss Indoors championship in Basel after his multi-year contract expired.

The announcement of Federer’s intent was also confirmed by the Swiss Indoors committee through their website whose tournament director Roger Brennwald had been negotiating with Federer's agents for the past six months. A deadline was set for today, April 10, for the five-time champion's commitment for this year’s ATP 500 tour stop slated at the St. Jakobshalle from October 19 until October 27, 2013.﻿

''For me it has always been clear, everyone knows how much this tournament in my hometown means to me even though there have been no written agreement. I can play in Basel if I feel like it also with or without contracts or arrangements, and I did,” reiterated Federer.

The announcement is a big boost to the 43rd edition of the Basel tournament where Federer grew up just a few minutes ride by tram from the stadium in Munchenstein. Federer served as a ball-boy at the tournament that included tennis greats John McEnroe, Boris Becker, Jim Courier, Goran Ivanisevic, Andre Agassi, Stefan Edberg and Pete Sampras.

Swiss Indoors is an important ATP World Tour stop as part of the season-ending race to the Barclays ATP World Finals in November in London.  Last year, Federer was denied his sixth title in seven finals by Argentina’s Juan Martin Del Potro.

The exclusive interview was published in the news daily Tages Anzeiger of Zurich conducted by Stauffer who wrote Federer’s autobiography “Quest for Perfection”. The Swiss Maestro, who has not played on tour since his defeat in the quarter-finals of Indian Wells to Rafael Nadal, also talked about his prolonged lay off from the ATP Tour in preparation for the clay court season, his ailing back, and his long-term plans.

Federer spoke about having to miss tournaments in Asia and Bercy Masters (Paris) 2013 because of his commitment to play at Swiss Indoors, Basel.﻿﻿ 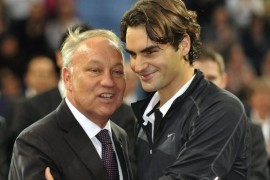 The interview was posted in Tages Anzeiger of Zurich where one can read the full German interview. The translated version in English is below:

You are in the midst of nearly a two-month break from competition. What do you do in this time?

After recovering from the tournaments in Rotterdam, Dubai and Indian Wells, I had a short vacation but after nine days I began to work again. For three weeks I did not do anything. I am back in Switzerland doing physical training and I am also practicing tennis again.

Despite the bad weather, how good is it to be practicing in Switzerland just before the clay season?

I have been working on a lot of fitness so the weather was not a big problem for me. So far I have played twice in a balloon hall on clay court and also practiced on indoor hard courts. That is why I am pleased the weather has become warmer on the weekend so I can start training harder. The training in next few weeks will get more intense. It will be important for me that there are good training conditions for the last two weeks before the tournament in Madrid from May 5. Then it would be especially nice that the weather holds.

How is your back? In Indian Wells it handicapped you especially in the quarter-final against Nadal.

I am satisfied, can do anything again. But it went longer than I had thought. I am glad that I am now back in training and can also play tennis. Indian Wells everything went so very fast. I could not get enough rest after the match against Wawrinka, and against a player like Nadal, I can not win in such a condition, I do not know what percentage I was fit. I just wanted to try it. The break came at the right moment.

Are you staying in Switzerland until the start of the clay season?

Severin (Luthi) has contact with several players that are here to practice with me. I am glad that I can perform this preparation in Switzerland. Later, Paul Annacone will be here in which I will play four or five hours a day.

Definitely. I have missed Switzerland in recent years it's also nice to enjoy a little time with nature and to be here to meet with friends and family. I could calm down a bit from the stress of everyday life on the tour and feel normal. Last year was stressful because of the Olympics. I really enjoyed the last few weeks, even if the weather was bad.

On Wednesday, the next Davis Cup opponents for World Group Play off of Switzerland will be known. Will you be available to play in September?

We must take it as it comes. Whether I will be there, I do not know. There is still a lot of time for that.

Another question is whether you are playing in autumn in Basel after your contract has expired in 2012?

It was always clear to me that I will play the Swiss Indoors 2013. I've not communicated it to everyone, but now the time has come. I've always played in Basel, in all the years when I was not hurt. Everyone knows how much this tournament means to me and that's always the case. I've been there as a ball boy, I once played in the qualifying rounds, even as a junior got a chance to play against the legend Andre Agassi. I have experienced many memorable moments in this unique atmosphere with great fans, and I am extremely happy to be able to experience it again this year.

So now has there been an agreement between you and Swiss Indoors?

No, but that was not necessary. I can play in Basel without any contracts or agreements and I am doing it. To compete on home soil, is very special for me because I'm on the road all year. I do not want to miss this chance.

There was much discussion about the negotiations between you and tournament director Roger Brennwald, rumors and speculation, it was also much talk of money. What do you think of that?

For this I really want to add further, because otherwise it just might be misunderstood again. I never said that I will not play in Basel. And now I'm trying to simplify this complicated thing.

Does that mean that you will skip this Paris-Bercy Masters 2013 again like last year?

There are many tournaments I've often missed because of the Swiss Indoors, this is nothing new. Although I also would like to go to Asia or Paris, but you have to set priorities, and Basel has always been one of my priorities.

In this year Race to London 2013 rankings, you are at No 8. Have you thought of coming back early to play more tournaments like Monte Carlo Masters?

I've actually considered it but I have also always said that this year the training and recovery will be my main priority, and I want to go this route. What I save on energy today, I can invest later. In the spare time in which you do not play, you can always fill your reserve tank. I've noticed this over the years and I find that I have not played so badly. In Australia I was good, Rotterdam I was off against Benneteau. It was disappointing in Dubai I lost in the semi-final against Berdych after having a match point. This stage of the season should not be over-analyzed. Now I'm preparing to do better in the coming months.﻿﻿