Videos Below: Swiss is also recipient of 2013 Jean Borotra Sportsmanship Award; The Making of a Legend 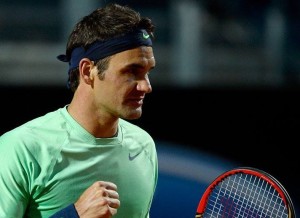 Swiss icon Roger Federer has been named as the world’s most powerful athlete by FORBES Magazine’s Annual Celebrity 100 list of 2013 and ranks eighth overall.

At No.2 is Golfer Tiger Woods and No.3 Miami Heat’s Lebron James are listed overall at No.15 and No.16 respectively. Oprah Winfrey tops the list of all celebrities. Other athletes in the overall list are are Davis Beckham, No.19 and Kobe Bryant at No.24.

With an impressive endorsement portfolio, most in sports, the 31-year old has ten major sponsors that pay more than $40 million per year. Federer has long-term deals with Rolex, Nike, Wilson and a Swiss bank Credit Suisse. The most recent sponsor Moet & Chandon, maker of champagne, signed Federer to a five-year contract at the end of last season in 2012. 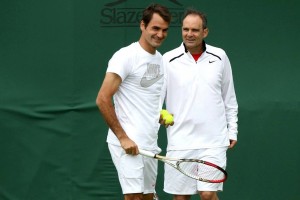 Among the most popular by earning the most print mentions of any athlete over the last 12 months, Federer is the second highest-paid athlete in the world with earnings of $71.5 million in the 12-months between June 1, 2012 and June 1, 2013.

Federer’s take increased after an exhibition tour in South America earning him $14 million for six appearances. Federer is considered as the greatest tennis player of all time holding the record of 17 Grand Slam trophies. The Bottmingen-born Swiss Meister also commands more than $1 million per exhibition event appearing in a staggering record of 24 men's Grand Slam finals including ten in a row while appearing  in 18 of 19 finals from 2005 Wimbledon Championships through to the 2010 Australian Open.

He is the only male player to reach at least the semifinals of 23 consecutive Grand Slam tournaments between the 2004 Wimbledon Championships and through to the 2010 Australian Open. At the 2013 Australian Open, he reached a record 33rd Grand Slam semi-final, and at the 2013 French Open a record 36th consecutive Grand Slam quarter-final. He has also won the most matches with 257 victories in men's Grand Slam events. Federer holds the record of being ranked No.1 in world for the 302 weeks since the professional players' rankings system was created in 1973 by the Association of Tennis Professionals.

A fan favorite, Federer has won numerous sportsmanship awards including the ATPWorldTour.com Fans' Favorite Award for a record ten consecutive years from 2003 to 2012. Among the players, he is the most popular having been the recipient of the Stefan Edberg Sportsmanship Award, voted on by his peers, a record eight times 2004 to 2009 and 2011–2012.

In a poll conducted in South Africa two years ago, Federer was surprisingly voted on as the second most trusted and respected person in the world, next only to the beloved Nelson Mandela. He also won the Arthur Ashe Humanitarian of the Year Award in 2006 and was named the Laureus World Sportsman of the Year for a record four consecutive years from 2005 to 2008. In Australia, the Swiss champion was named "Favorite Athlete" in 2012.

The ‘Celebrity 100’ is based on entertainment-related earnings plus media visibility - exposure in print, television, radio and online.  Selection for the list covers film/TV actors, TV personalities, models, athletes, authors, musicians and comedians.

Not bad for a former Swiss Indoors ball-boy...

ATPWorldTour: The Making of a Legend: Roger Federer