Nadal's Superb Return to the Top 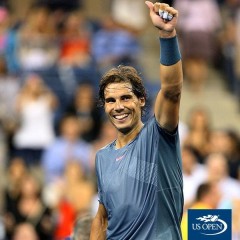 “One year ago, if you had told me I would have come back to be here, it's been an amazing year. I can just thank my family. Without their support, this wouldn't have been possible. It's been a very emotional year,” said Rafael Nadal.

After a seven-month lay-off due to a career-threatening left knee injury, 13-time Grand Slam champion Nadal came back in an unbelievable fashion in 2013, winning 10 tour-level titles, posting a match record of 75-6, including 36-3 on hard courts while reaching 14 final out of 17 tournaments.

The 27-year old native of Mallorca was crowned year-end World No. 1 by the Emirates ATP Rankings and also received the ATP Comeback Player of the Year award.

Nadal made his comeback in February at the 2013 VTR Open in Chile where he reached  the final but was upset by Argentine World No. 73 Horacio Zeballos. The following week at the 2013 Brazil Open in São Paulo, Nadal defeated David Nalbandian in the final then capped the Latin American Golden Swing with another victory Abierto Mexicano Telcel in Acapulco where he beat Spanish compatriot David Ferrer.

Nadal would tear through the rest of the season winning in Indian Wells Masters, Barcelona Open, Mutua Madrid Masters, Italian Open Masters, a record 8th French Open trophy.  After Nadal lost his first-round match at the Wimbledon in straight sets to Belgian Steve Darcis, Nadal continued his winning ways with wins at the Rogers Cup Masters in Montreal and Cincinnati Championships – his 25th and 26th Masters victories – then capping it with his second U.S. Open title in New York beating top-seed Novak Djokovic in the final.

ATPWorldTour: 2013 Year in Review Part I 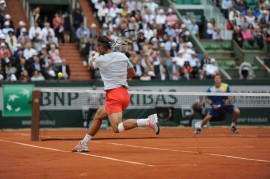 December 16 2013 ITS Staff - Beside his 13 Grand Slam titles, Nadal copped the 2008 Olympic gold medal in singles and posted a record 26 ATP World Tour Masters 1000 and 14 ATP World Tour 500 tournaments – both Open Era records. He was also a member of the winning Spain Davis Cup team in 2004, 2008, 2009, and 2011. In 2010, he became the seventh player in history and youngest of four in the Open Era to achieve the Career Grand Slam. He is only the seconde male player, after Andre Agassi, to complete the Career Golden Slam.

Nadal and Sweden’s Mats Wilander are the only two players in history who have won at least 2 Grand Slam events on three different surface namely hard court, grass, and clay courts. By securing the 2013 French Open, the 27-year old Mallorcan became the only male player to win a single Grand Slam tournament eight times and the first to win at least one Grand Slam tournament for nine consecutive years, breaking the record of eight previously shared by Björn Borg, Pete Sampras, and Roger Federer. Nadal also holds the record for most consecutive titles in a tournament  winning his eighth straight at Monte Carlo Masters in 2012.

ATP Awards: Rafa Nadal Crowned World No.1 and "Comeback Player of the Year"