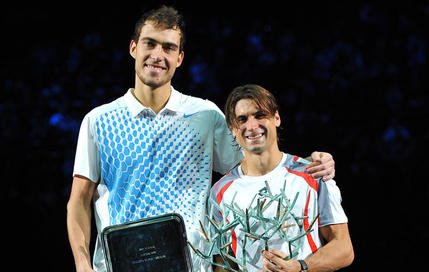 Janwicz and Ferrer. Photo by Panoramics

Paris - After seventeen career ATP World Tour titles, David Ferrer finally won the most elusive trophy on Sunday when he defeated hot-streaking Jerzy Janowicz of Poland in the final of the Masters 1000 Paris-Bercy  6-4, 6-3 winning his tour-leading seventh title of the season surpassing Roger Federer at six.

His game may not have shot-making brilliance in his repertoire but clearly against Tsonga (QF), Llodra (SF) and against the 21-year old, Ferrer was a model of toughness and determination that frustrated his opponents into taking more risks extracting unforced errors.

Going into his fourth Masters finals, Ferrer owned the record for most wins with 123 in Masters 1000 competition, Ferrer has yet to win his first career Masters title after three previous finals appearances in Rome in 2010, in Monte-Carlo and in Shanghai both in 2011.

“It’s a dream come true to win a Masters event”, said Ferrer who became the first Spaniard to win at Bercy. Countryman Rafael Nadal was finalist in 2007.﻿﻿

Tournament sensation Janowicz, who entered as a qualifier causing a major upset of No.2 Andy Murray in the third round, could not crack Ferrer’s consistency committing 43 unforced errors despite winning 27. Ferrer, meanwhile, committed only 12 unforced mistakes and winning only 13 in the match lasting one hour and 28 minutes. Ferrer broke the Pole at 5-4 in the first set and had little problem in the second to wrap up the match.

It was a disappointing end to Janowicz fairytale run at his first appearance in a top-tier ATP event after starting the year playing in the Challengers and Futures circuit. But with this week’s result, Janowicz ranking is projected to move up to No.26 from No.69 before the tournament.

For Janowicz, though, it’s one of the breaks that he’s been hoping for as the six-foot-8 had a hard time keeping up with the tour’s travel expenses. “For a year and a half, I really struggled. I hope that these results will yield bigger sponsors,” said Janowicz whose parents had to sell their store and several family assets to fund his trips.

So far this week Janowicz earned $234,865 Euros as he adds, “I think that I will not have to worry about money because I'll have a good chance to fight for a better ranking. I will be seeded in Australia, for me, this is a huge help. In smaller tournaments, I'm having a Bye (going right) in the first round. This will help me a lot. This will give me the opportunity to work even harder. I'll fight for every point, and maybe one day I'll be able to get into the top 10. "﻿

The remarkable run made the former US and French Open junior finalist first player to reach the final of a Masters tournament as a qualifier since Guillermo Canas in 2007, and the first unseeded entry to make the final at the Paris Masters since Andrei Pavel in 2003.﻿

Last year, Bopanna teamed with Qureshi to win the Paris crown. Qureshi and Rojer were playing their third ATP World Tour final together. The Pakistani-Dutch duo saved two match points in a 17-15 Match tie-break second-round win over Feliciano Lopez and Nenad Zimonjic.﻿﻿﻿﻿ > Complete PARIS MASTERS ROUND UP > Video below by TheTennisChannelHD