"I'm very proud to win this award - it's been a tough couple of years," said Murray upon receiving his trophy, crafted by Lenox.

In addition to raising awareness for the work of Unicef, United for Wildlife and Malaria No More, the Scot took part in Rally Against Cancer charity exhibitions at Queen’s Club the past two summers in support of former players and friends Ross Hutchins and Elena Baltacha. Hutchins was diagnosed with Hodgkin's lymphoma in December 2012 and announced he was in remission the following July. Baltacha was diagnosed with cancer of the liver and passed away earlier this year at the age of 30.

This autumn, Murray also appeared with comedian Richard Ayoade in ‘Andy Murray: The Movie’, a sketch that was part of Channel 4’s ‘Stand Up To Cancer’ programming. 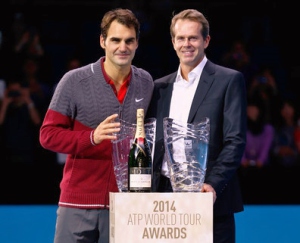 Following his straight-set win over Canada’s Milos Raonic, Federer’s coach and childhood idol Stefan Edberg stepped onto the court at The O2 to present the Swiss with the trophy named in his honour, the Stefan Edberg Sportsmanship Award. Federer had been voted by fellow players as the winner for a 10th year, but received the trophy from Edberg himself for the first time.

“This award means a lot to me. I try to play as fairly as I can. This is a classy sport and I try to represent it as well as I can,” said Federer. "Stefan has paved the way for me. He's been my hero. It was a big surprise that he actually decided to come work with me and travel the world. He's been a great inspiration both on and off the court."

Meanwhile, Edberg disclosed what sportsmanship meant to him: “It’s about being honest and respecting everyone around you, such as the ball kids and the umpire.”

ATP Executive Chairman & CEO Chris Kermode then presented Federer with his trophy as ATPWorldTour.com Fans’ Favourite Presented By Moët & Chandon. He received 65 per cent of all votes cast online by fans,  extending his record winning streak to a 12th straight year.

"I feel very honoured to receive this award," said Federer. "Thanks for always supporting me wherever I go. Tonight, when I entered the building, it was one of the greatest ovations I've received in my career." Since 2003, Federer has won a record total of 29 ATP World Tour Awards.

Watch young 12-year old Roger Federer receiving a medal (on 5:56th minute of video) as one of the Swiss Indoors ball kids in 1993 after Michael Stich and Stefan Edberg final. 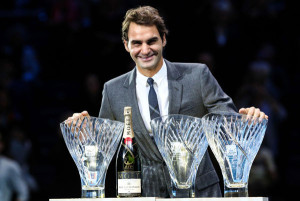 Federer was selected by his peers as the winner of the Stefan Edberg Sportsmanship Award for a ninth time and by fans as the ATPWorldTour.com Fans’ Favourite presented by Moët & Chandon for an 11th straight year.

On receiving the Sportsmanship award, Federer said, “It is very special as Stefan Edberg was my hero growing up, when all I wanted to do was play on the ATP World Tour. So to follow in his footsteps is wonderful and I hope I can be a role model for players growing up.

“It’s all a bit overwhelming to be honest,” admitted Federer, when he received the Fans' Favourite award. “I have been around a long time, so I guess that helps. I appreciate all the fans turning up to stadiums around the world. You (the fans) keep me working hard. I am forever grateful.”

In addition, the 32-year-old Swiss was named the Arthur Ashe Humanitarian of the Year for a second time (also 2006) in recognition of his foundation’s support of children in Africa and Switzerland. Since 2003, Federer has won a record total of 27 ATP World Tour Awards.

“It is something very personal on many levels,” said Federer. “I never thought that it would be possible as a young boy to establish a foundation. Arthur Ashe and Andre Agassi inspired me by their example.

“It is 10 years since we established the foundation. We hope to touch one million lives by 2018. It is an honour to receive this award for a second time.”