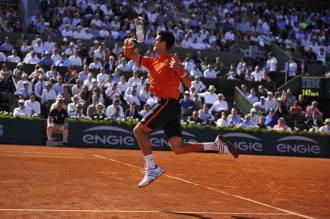 rolandgarros.com: June 3 2015 Matt Trollope & Kate Battersby, Paris, France - After nine years and six straight losses, finally, it was Novak Djokovic's time. The Serb scored his first-ever victory over his Roland-Garros nemesis Rafael Nadal, a player who had first beaten him her back in 2006 and who had in each of the past three years thwarted his attempts to win the one major title missing from his Grand Slam collection.

Djokovic may not have won the title today, but his path to the trophy has never before been clearer. He made that scenario possible on Wednesday when he ousted the nine-time champion 7-5, 6-3, 6-1 on Philippe-Chatrier Court. 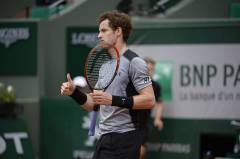 For the first time in five years, a new name will be inscribed on the Coupe des Mousquetaires. And for the first time ever, the Spaniard was thoroughly dominated at Roland-Garros. When Djokovic claimed the second set after wearing Nadal down with a barrage of increasingly-angled off-forehands, it was the first time in history that the Mallorcan had even found himself down two-sets-to-love in the French capital. That deficit seemed to break his spirit - against the increasingly loose and confident world No.1, Nadal lost the third set in just 33 minutes.

Awaiting there will be Andy Murray Andy who broke important new ground at Roland-Garros 2015 with his quarter-final win over David Ferrer, to reach the last four at the French Open for the third time. In four previous meetings on clay, Ferrer had always emerged the victor. But this time Murray crafted a brilliant win, blotted only when the Spaniard came back from match point down in the third set to take the joust into a fourth. The No.3 seed won 7-6(4), 6-2, 5-7, 6-1 to take his current streak on clay to 15 matches, all vital mental ammunition when he faces Djokovic in Friday's semi-final. 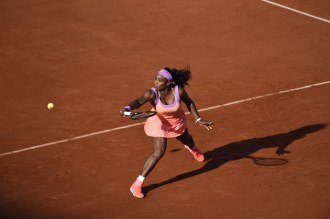 wtatennis.com: June 3 2015 Paris, France - There were ups and downs in her last three rounds, as she had to battle back from a set down to win all of them - but it was all ups and no downs on Court Philippe Chatrier on Wednesday, as Serena Williams powered past Sara Errani in straight sets to reach the French Open semifinals.

Errani always seems to bring out her best in Paris - going into this match she had won 19 of her last 22 matches here, including a fairytale run to her first major final in 2012, falling to Maria Sharapova. But the No.17-seeded Errani was no match for the No.1-seeded Williams in this quarterfinal clash, as Williams hit 39 winners to 23 unforced errors to cruise through in an hour and six minutes, 6-1, 6-3.

Williams has always thrived in this match-up - she's now an impressive 9-0 lifetime against Errani. Williams was also serving fantastically in the match - she was only broken once in eight service games, compared to getting broken four times in each of her last three matches. And now, a round Williams thrives in - she's an amazing 23-3 in her career in Grand Slam semifinals.

Awaiting Williams in the semifinals will be No.23 seed Timea Bacsinszky, who beat No.93-ranked WTA Rising Star Alison Van Uytvanck in straight sets in the other quarterfinal of the day. Bacsinszky looked headed for a routine straight set victory as she won the first set, 6-4, then jumped out a 3-1 lead in the second set, but Van Uytvanck broke back and caught up to 3-all, 4-all, even 5-all. But the No.23-seeded Swiss ripped one last down-the-line backhand winner to close it out, 6-4, 7-5. 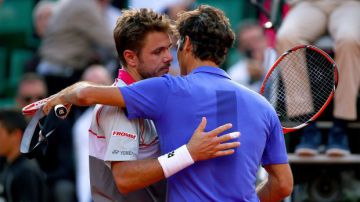 atpworltour.com: June 2 2015 Paris, France - Stan Wawrinka advanced to the Roland Garros semi-finals for the first time Tuesday as he upset countryman Roger Federer 6-4, 6-3, 7-6(4) in blustery conditions in Paris. Wawrinka beat Federer at a Grand Slam championship for the first time (Federer was previously 4-0 at majors). The Lausanne native is through to his fourth major semi-final; he went on to win his first Grand Slam title at the 2014 Australian Open (d. Nadal).

The 30-year-old Wawrinka goes on to face home favourite Jo-Wilfried Tsonga, who survived a five-set tussle to beat Kei Nishikori 6-1, 6-4, 4-6, 3-6, 6-3. Wawrinka takes a 3-3 FedEx ATP head2Head record into the clash and has won their past two clashes. They have met at Roland Garros twice before, with both matches going five sets; Wawrinka prevailed in 2011 and Tsonga in 2012.

Wawrinka got off to a lightening start, breaking to love in the third game before going on to take the opener, saving a break point in the 10th game. From 2-3 down in the second set, Wawrinka raised his level again to reel off four straight games and snatch the second set. It left Federer facing the challenge of coming back from two sets down for 10th time in his career, and he was afforded no opportunity.  The Basel native could not find a way to break Wawrinka’s serve and it was Wawrinka who pounced in the ensuing tie-break to seal victory in two hours and nine minutes. Despite the challenging weather, Wawrinka hit 43 winners to just 28 unforced errors. 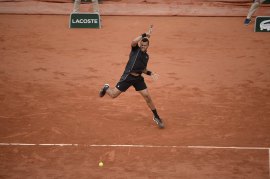 Wawrinka will now face Jo-Wilfried Tsonga who became just the second Frenchman in the Open Era to reach multiple semi-finals at Roland Garros after knocking out fifth seed Kei Nishikori 6-1, 6-4, 4-6, 3-6, 6-3 on Tuesday. Tsonga led 6-1, 5-2 when a piece of metal scaffolding fell off the scoreboard into the stands, delaying play for 30 minutes. Despite being broken in the first game back, Tsonga managed to serve out the set on his second attempt. The Japanese star stormed back to take the third and fourth sets and force a decider in front of the French crowd. But Tsonga maintained his composure, converting one of his two break point chances in the fifth set for victory. The Frenchman fired 10 aces and hit 44 winners in the three hour, 44-minute win.