R4 L. SAFAROVA vs A. PETKOVIC (did not play) 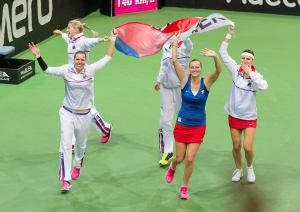 The world No. 4 came through a gripping battle 76(5) 46 64 to end any hope of a German comeback from 2-0 down and secure victory for her nation amid a raucous atmosphere in front of 13,000 fans in the sold-out O2 Arena in Prague.

With an eighth Fed Cup triumph, Czech Republic now move above Australia to become the second most successful nation in the competition, but it took a lot of heart from the Wimbledon champion to get them over the line on Sunday.

Kerber’s effort was heroic less than 24 hours after she had struggled to hold both nerve and serve during Saturday’s second singles rubber, squandering the advantage of a break over Lucie Safarova in each set. The German returned on Sunday determined to handle herself better under pressure.

So it proved, and though Kerber’s occasional frailties on serve remained painfully apparent in her first two service games, it was the German who struck the incisive first blow as Kvitova flung a backhand long on Kerber’s first break point in the fifth game to hand the travelling contingent the glimmer of hope they needed.

Growing in confidence, Kerber immediately brought up another break point in the seventh game with a fierce down the line winner - and promptly converted when Kvitova again went long with an on-rushing volley for 5-2.

Kvitova finally made a dent on Kerber’s serve in game eight, converting her sixth break point opportunity of the match – and it was just the boost she needed. Kvitova held, broke again for 5-5, but just when the momentum appeared to be with the Czech, Kerber broke for 6-5. However, she failed for the third time to serve out the set.

Numerous thrilling exchanges followed as both players went toe to toe in an intense tiebreak, but in a battle of wills it was the Czech’s that proved the stronger. After an hour and 16 minutes Kvitova finally clinched the first set, slapping an inside-out forehand winner to deafening noise inside the arena.

For all Kvitova’s winners – she had struck 48 in the opening two sets – her unforced error count routinely gave Kerber a glimmer of hope. She took advantage, crucially, in the 10th game of the second set, pulling up two break point opportunities and sealing the set on the first when Kvitova skewed her 50th unforced error of the match into the tramlines.

Proceedings continued in a similar fashion in the decisive set. Kerber flew out of the blocks for a 3-0 lead, but the pressure on the player in front continued to tell and Kvitova found her way back to 4-4 before securing a crucial break in the ninth game.

Tasked with serving for glory after two hours and 57 minutes, the Czech No. 1 duly delivered for her nation. Missing her first three match points courtesy of a mixture of nerves and fine defence from Kerber, she crushed German hearts and hopes on the fourth when the world No. 10's resistance finally gave out.

Germany at least picked up some form of consolation as Julia Goerges and Sabine Lisicki beat Andrea Hlavackova and Lucie Hradecka 64 64 in the dead doubles rubber. For captain Barbara Rittner there was still disappointment following defeat in the Final but her pride at the way in which Kerber had battled so hard was overwhelmingly clear as she reflected on the weekend.

R4 C. DELLACQUA vs PETKOVIC (did not play) 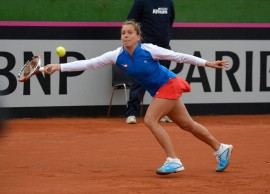 Strycova lost her singles but was brilliant in doubles. Photo Daniel Maurer 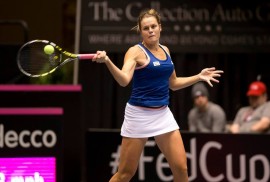 fedcup.com: February 9, 2014 Cleveland, Ohio, USA: This weekend at the Public Auditorium in Cleveland, Ohio, the USA couldn’t stop the reigning champions Italy from sticking to their winning ways. So after three rubbers played it was Italy, proudly boasting a 3-0 insurmountable lead in this Fed Cup quarterfinal tie, that was running around the court waving an Italian flag in victory. Italy took charge the moment they hit the courts, winning both of their matches on Saturday to leave the arena with a 2-0 lead. Karin Knapp dispensed of Christina McHale 63 36 61 in Saturday’s first rubber, and then Camila Giorgi and Madison Keys, both playing their first Fed Cup matches, took to the court. Giorgi needed all of an hour to bypass Keys 62 61. Tie Details 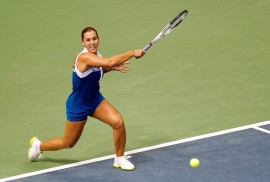 fedcup.com: February 9, 2014 Bratislava - It’s hard to believe that Germany hasn’t been in a Fed Cup by BNP Paribas semifinal since 1995, but that statistic is now banished to history, thanks to Angelique Kerber’s 63 76(5) victory over Dominika Cibulkova that sees the Germans into this year’s semis. It gave Germany a 3-0 lead, and means the Germans are due to travel to Australia in April’s semifinals. Although the score reads brutally for the Slovaks, the decisive match was rich in high quality tennis, with even Cibulkova admitting that she played well but Kerber played just a little better. Cibulkova did very well to fight back from a storming start by Kerber, one which saw the German take the first nine points, and while the first set shows a reasonably even 63 scoreline, the fact was that Cibulkova needed to go to deuce on all three games she won, while Kerber was winning most of her games easily. Tie Details 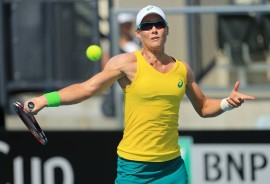 fedcup.com: February 8, 2014 Hobart, Australia - World No. 16 Sam Stosur did not dissapoint on Sunday as she completed victory over Russia's Victoria Kan, 62 63, to progress to April's Fed Cup World Group semifinals. The former US Open champion, who won her first rubber on Saturday, faced No.158 Victoria Kan and lived up to that billing as she got the job done in exactly one hour. Aged just 18, Kan was making her Fed Cup debut having been brought in for Irina Khromacheva but could not turn the Russian team's fortunes around. Khromacheva was brought back in for doubles with Valeria Solovyeva could not get into the match against three-time Grand Slam finalists Ashleigh Barty and Casey Dellacqua as the Australian pair completed a 61 63 victory. Tie Details