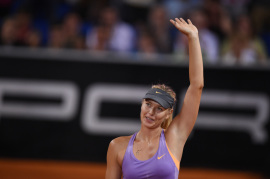 A hat-trick in Stuttgart for Sharapova. Photo porsche-tennis.de

wtatennis.com: April 27, 2014 Stuttgart, Germany - Maria Sharapova stormed back against Ana Ivanovic to win her 30th WTA title at the Porsche Tennis Grand Prix. It's her first ever three-peat at a WTA tournament.

She was in all kinds of trouble - her opponent led 63 31 with a point for 63 41 - but there's a reason Sharapova is a four-time Grand Slam champion and former World No.1, and that unrelenting will to win came out in full force again as the Russian battled back to beat Ana Ivanovic in the final of the Porsche Tennis Grand Prix, 36 64 61, and capture her 30th WTA title.