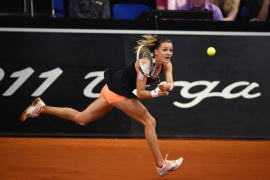 porsche-tennis.de: April 24 2014 Stuttgart - It is the match of the day and for many an early final at the Porsche Tennis Grand Prix – Maria Sharapova against Agnieszka Radwanska. The defending champion from Russia and the Polish world No. 3 will contest the first quarterfinal in the Porsche Arena on Friday.

Seeded number one Radwanska cruised comfortably into the quarterfinals after beating Italian Roberta Vinci 6-3, 6-2 in the day’s opening encounter. Sharapova, the 2012 and 2013 champion, overcame Anastasia Pavlyuchenkova 6-4, 6-3 in a match that lasted one hour 32 minutes. The duel between the two Russians was over in 1 hour 32 minutes.

It was not a good day for the players belonging to Porsche Team Germany as the Porsche Tennis Grand Prix came to an end in the last 16 for Julia Görges and Angelique Kerber, who came to the tournament with high expectations after the win in the Fed Cup semifinal in Australia. 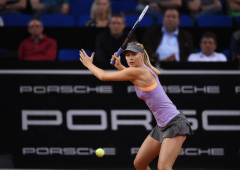 Sharapova back in quarter-finals. Photo porsche-tennis.de

Julia Görges lost 1-6, 6-2, 6-3 against Ana Ivanovic and this after Görges had a whirlwind start to the match against the world No. 12. It took her just 27 minutes to wrap up the first set but then the Serb slowly found her game whilst the German started making more and more mistakes.

Ivanovic eventually converted her third match point after one hour 40 minutes against the German who put up stiff resistance right to the end. Ivanovic will now face Russian Alisa Kleybanova in the quarterfinals.

Later in the evening, Kerber was defeated by Carla Suarez Navarro 7-5, 6-4. The Spaniard, who lost in two sets to the German No. 1 in Sydney at the beginning of the year, impressed with her quick footwork, her consistency and a technically perfect backhand. The 25-year old Spaniard will now face Italian Sara Errani in the quarterfinals. 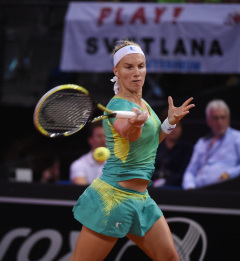 The last quarterfinal place has been filled by Svetlana Kuznetsova. Ranked No. 29 in the world, the Russian, who won the 2009 Porsche Tennis Grand Prix before going on to win the French Open in the same year, upset No.2 seed Simona Halep from Romania.

The year’s most improved player, now the world No. 5, was one of the favorites going into her first appearance at the Porsche Tennis Grand Prix in Stuttgart but bowed out to the experience of her opponent. Kuznetsova will now play Görges’ conqueror Ivanovic in the last eight. 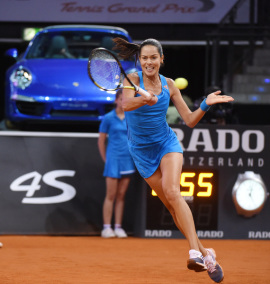 porsche-tennis.de: April 23 2014 Stuttgart - Julia Görges had every reason to be pleased after her 6-1, 7-5 win against the Romanian Sorana Cirstea. In the last 16, the Porsche Team Germany player will now meet Ana Ivanovic.

Playing Sabine Lisicki, the former World No. 1 from Serbia booked her place in the second round and in doing so promptly knocked the 2013 Wimbledon finalist out of the tournament.

The German had no chance on the day against Ivanovic who closed out the match with her second match point after exactly one hour of play. A resident of Basle, the 2008 French Open winner dominated right from the start of the Centre Court encounter.

After her shoulder injury, Sabine Lisicki was simply not in the form that had taken her to the Wimbledon final ten months ago. The world No 14 was nevertheless not dissatisfied with her fleeting appearance at the long-standing Stuttgart tournament. 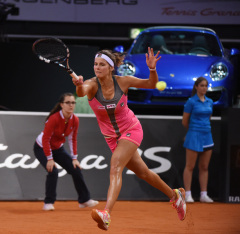 Confidence was something Andrea Petkovic has been building up recently as a result of her win at the tournament in Charleston in March and then last weekend when reaching the Fed Cup final with Porsche Team Germany.

Things are going well for the 26-year old at the moment – but it is still an exhausting time. And it is exactly what happened in her match against Flavia Pennetta – even though it only came in the third set. “Petko” lost 7-5, 3-6, 6-1 against the world No 13 from Brindisi. With the score at 4-3 in the first set for Pennetta, the German had a slight shock because of a pulled thigh muscle and was only able to continue after having treatment.

In other matches late Wednesday, Alisa Kleybanova upset No.3 seed Petra Kvitova after coming back from 5-3 down in the second set to secure the tie-breaker and the match in straights, 6-2 7-6(3). 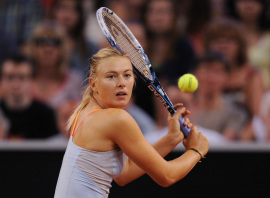 porsche-tennis.de: April 22 2014 Stuttgart - It was one of the longest and most enthralling matches in the history of the Porsche Tennis Grand Prix. Watched by a capacity 4400 crowd in Stuttgart’s Porsche Arena, Maria Sharapova (Russia) eventually closed out the match after three hours 23 minutes 7-6 (5), 6-7 (5), 7-6 (2) against the battling Lucie Safarova. The world number 26 from the Czech Republic never gave up and resisted stoutly in the face of defeat right up to moment when Sharapova wrapped up the win.

It was the first match at a WTA tournament that had gone to three tie-break sets since 2010. The last one was won by Serena Williams (USA) in Madrid against the Russian Vera Dushevina. Almost every game went to deuce and the Russian led 5-1 in the third set but failed to convert three match points. Lucie Safarova fought back, won five games in a row and was herself only two points away from victory when leading 30-love on her serve. Maria Sharapova now drew upon the wealth of her experience and broke back with nerves of steel to force a tie-break which she took 7-2. The match marked Maria Sharapova’s 100th win on clay. 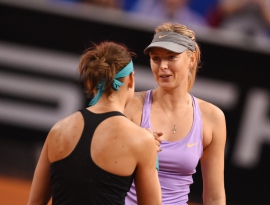 Porsche Team Germany’s Annika Beck, who played impressively when qualifying for the main draw at the long-standing Stuttgart tournament, lost her first round main draw match against the Italian Roberta Vinci 6-3, 6-2. Playing alongside fellow Germany Kristina Barrois, she has however advanced to the second round of the doubles after winning 7-6 (0), 1-6, 10-5 against Eleni Daniilidou (Greece) and Mirjana Lucic-Baroni (Croatia).

The spectators at the 37th Porsche Tennis Grand Prix were also thrilled by a great performance from Angelique Kerber and Andrea Petkovic in the doubles. Still tired after the long trip to Stuttgart from the Fed Cup semifinal in Australia, they were defeated by the world class pairing of Cara Black (Zimbabwe) and Santa Mirza (India) 4-6, 6-2, 10-7. Particularly bitter – the match point was a net-cord winner.

In the last match of the day in the Porsche Arena, Mona Barthel narrowly missed out on causing a big surprise. The Porsche Team Germany player, who made it into the main draw as lucky loser after Dominika Cibulkova was forced to withdraw through injury, came close to beating Serb Jelena Jankovic. However she was unable to make use of her four match points against the former world No. 1 and 2008 Stuttgart winner. Jelena Jankovic went one better when taking advantage of her third match point way past midnight to win 2-6, 7-6 (8), 6-3.