Davis Cup now and then... 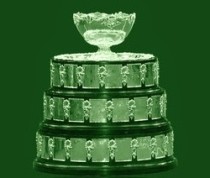 The first round of the world’s largest annual international team competition in men’s tennis goes underway this weekend February 1 to 3.

Defending champion Czech Republic leads 137 countries in this year’s first round action on Friday after celebrating their 3-2 win over power-house Spain in its 100th Final last November, 2012 at the O2 Arena in Prague. ﻿

Organized by the International Tennis Federation (ITF), the Davis Cup event is played annually between teams from competing countries in a knock-out format and structured with a 16-nation World Group over four weekends during the year.﻿﻿

Last year's World Group runner-up Spain will go against Canada, the United States will face Brazil while France tackles Israel who beat the Nishikori-led tough Japanese team in last season’s World Group qualifying finals to make the sweet sixteen. The Czech teamwill be without the services of Stepanek who won the decisive fifth rubber against Nicolas Almagro of Spain in the finals. The finals hero withdrew citing a back injury thus ruling him out of the tie against Switzerland.  Ivo Minar will be replacing Stepanek.﻿ 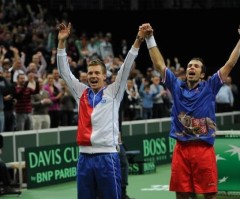 World No. 1 Novak Djokovic of Serbia will lead his country this weekend against Belgium but also without teammate world No.9 Janko Tipsarevic who recently pulled out because of a foot injury during last week’s Australian Open. Djokovic last Sunday became  the first man in the Open Era to win three successive Australian Open titles after coming from behind to beat No. 3 seed Andy Murray 6-7(2), 7-6(3), 6-3, 6-2 at the Rod Laver Arena in Melbourne.﻿

The 25-year old Serbian star captured his sixth Grand Slam championships and the third man in the Open Era to win four Australian Open titles, joining Agassi and Roger Federer in the elite club. His Serbian team made Davis Cup history in 2010 together with Tipsarevic, Viktor Troicki and Nenad Zimonjic when the squad lifted the coveted Davis Cup trophy for the first time after beating France 3-2 in Belgrade.﻿ For this weekend, the Serbian team has announced that world no.39 Viktor Troicki ﻿will officially replace Tipsarevic in the team.﻿﻿

The United States will be led by the Mike and Bob Bryan combo who won their historic No.13 Grand Slam Doubles title at the Australian Open Doubles finals.  The victory broke the record held by Australian legends John Newcombe and Tony Roche of 12 major titles and registered their sixth Australian Open including four at the US Open, two at Wimbledon, and one French Open. The identical twins, whose team has been ranked No. 1 in doubles for eight of the past ten years, also have an Olympic gold medal and a Davis Cup championship trophy.﻿ 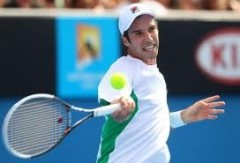 Kazak Mikhail Kukushkin made history in 2011 with win over the Czechs. tennisdesire.com

The American team, with No.16 John Isner, overcame great odds last season when they went on to defeat Switzerland and France, all away games on clay, before their run was stopped by Spain in the semifinals. This year they will face Brazil, who finally made the World Group after losing in the World Group play-offs for six straight years.

The rest of the matchups this weekend in the World Group include Croatia versus Italy, Argentina against Germany who eliminated Australia in the relegation, and Austria will take on second-timer Kazakhstan who moved up to the elite group when they upset Uzbekistan 3-1 in the qualifying of World Group last season.﻿

Kazak Mikhail Kukushkin won both his singles rubbers either side of victory by Andrey Golubev and Yuriy Schukin over Farrukh Dustov and Denis Istomin in the doubles rubber. Kukushkin put in an impressive performance in front of President Nursultan Nazarbayev on the third day to upset Istomin who was ranked 36 places above Kukushkin.

Competing in the World Group for the first time in its history in 2011, Kukushkin crashed the party in Ostrava against the Czechs beating  Jan Hajek 64 67(4) 76(8) 60 to complete a 3-2 victory over Czech Republic that sent the World Group rookie Kazakhstan into the quarterfinals.﻿ Before 1995, players from Kazakhstan competed for Soviet Union.﻿ (Sources: itftennis.com; tennis.com.au; daviscup.com; ITSarchives﻿﻿)

Davis Cup Past - A Snap Shot

The idea of Davis Cup was conceived in 1899 by four members of the Harvard University tennis team, who wished to set up a match between USA and Great Britain then playing under the name of British Isles.  Once the two respective national associations had agreed, one of the four players, Dwight Davis, designed a tournament format and ordered a trophy, buying it with his own money.﻿ Continue to > Davis Cup Past: A Snap Shot