Third-seeded Murray outlasted the home favourite in a pulsating three-hour thriller, refusing to allow Robredo to exact revenge after saving five match points to claim the Shenzhen Open title last month. At three hours and 20 minutes, it was the longest final on the ATP World Tour this year.

Murray, who was contesting his 20th match in five weeks, having prevailed on the hard courts of Shenzhen and Vienna, added 200 points to his 4,095-point haul in the Emirates ATP Race To London. The Scot surged to  No. 5 and 30 points clear of Kei Nishikori in his bid to qualify for the Barclays ATP World Tour Finals for the seventh year in succession. He receives $390,325, while Robredo walks away with $175,975 for his efforts.

Their seventh FedEx ATP Head2Head encounter (Murray leads 5-2) was a hot shot exhibition; a grueling battle of attrition that featured multiple momentum shifts. The 32-year-old Robredo refused to yield an inch from the baseline, proving he was up to the task throughout the marathon affair. He struck first in the opening set, breaking for a 4-3 lead when Murray netted a forehand. The Scot was unable to convert on all six of his break point opportunities in the first set and it would prove costly, as Robredo took the opener after nearly an hour.

Murray's fortunes changed in the second set, and after exchanging early breaks of serve, he would fight off aRobredo, Murray pair of match points from the persistent Spaniard in an eventual tie-break to draw level. Despite failing to convert on championship points in their second straight meeting, Robredo was not willing to back down in the deciding set. A thunderous roar echoed through the Agora Stadium as the hometown hero broke to love for a 4-3 advantage.

With his back against the wall, Murray would break back immediately and force a deciding tie-break after squandering a match point of his own in the 10th game. Robredo would secure a mini-break for 5-4 and had match points at 6-5, 7-6 and 8-7, but Murray rose to the occasion, saving them all and finally sealing the win with a backhand passing shot.

Robredo, who secured his 500th tour-level match win with a semi-final victory over Jeremy Chardy, was looking to become the ninth Spaniard to emerge victorious in tournament history, since the event moved to Valencia in 2003. He falls to 12-10 in finals on the ATP World Tour with the defeat.

atpworldtour.com: October 25 2014 Valencia, Spain - Andy Murray continued his quest to qualify for the Barclays ATP World Tour Finals for the seventh straight year on Saturday by reaching the Valencia Open 500 final. Murray will rise to No. 5 in the Emirates ATP Race To London should he capture his 31st tour-level title on Sunday against Tommy Robredo or Jeremy Chardy, who play their semi-final this evening.

Ferrer gifted Murray the opening game of the pair’s 15th meeting, by striking two double faults. Murray grew in confidence and though he saved once break point when serving for the set at 5-4, he won three straight games at the start of the second set.

Momentum swung back to Ferrer as he won four games in a row for a 4-3 lead. Murray regrouped to break again for a 6-5 lead and was forced to save three break points in a lengthy final game. Ferrer's 29 unforced errors proved detrimental, compared to Murray's 22 winners and 76 per cent of first serve points won.

atpworldtour.com: October 24 2014 Valencia, Spain – Andy Murray and David Ferrer will go head-to-head for the third week in a row in another crucial clash in the battle to qualify for the Barclays ATP World Tour Finals on Saturday in the Valencia Open 500 semi-finals.

Murray and Ferrer are currently eighth and ninth in the Emirates ATP Race To London, with the winner of Saturday’s contest set to add a further 120 points to his total. Ferrer prevailed when the pair met in the Shanghai Rolex Masters third round, but Murray claimed revenge on Sunday in the final of the Erste Bank Open in Vienna.

The Scot edged Kevin Anderson 6-7(3), 6-4, 6-4 in the quarter-finals on Friday. In a grueling contest lasting two hours and 44 minutes, Murray converted five of his 12 break point chances. He made a decisive move early in the third set and afforded Anderson no opportunity get back in contention, winning 86 per cent of points behind his first serve.

Ferrer became the fourth active player to record 600 tour-level wins as he dismissed Thomaz Bellucci 6-1, 6-2 in just 67 minutes. The Javea native won 74 per cent of his service points and converted four of his eight break points as he advanced to his 16th quarter-final of the season. Ferrer was congratulated with a celebratory cake on court by his nephew and Tournament Director, Juan Carlos Ferrero.

Jeremy Chardy stormed into the semi-finals with a 6-1, 6-2 victory over Pablo Carreno Busta. The Frenchman reached his first semi-final since the first week of the season in Brisbane (l. to Federer) as he won 92 per cent of his first serve points and broke his Spanish opponent four times

Ferrer is currently 10th in the Emirates ATP Race To London, and can add points to his tally by reaching the Valencia semi-finals. The Javea native is pushing for a sixth berth at the season-ending championships, held 9-16 November at The O2 arena in London. Only three of eight spots remain up for grabs.

The top seed swept past fellow Spaniard Fernando Verdasco 6-3, 6-2 to record his 50th match win of the season and 30th at this ATP World Tour 500 event. The 32 year old, runner-up to Murray in last week’s Erste Bank Open, held serve through all nine of his service games and broke the 30-year-old Verdasco thrice during the 67-minute encounter.

Third seed Murray continued his push for a London berth with a 6-2, 6-4 victory over Fabio Fognini. The Scot has won 15 of his past 17 matches as he mounts a late surge in the Emirates ATP Race To London. Murray is bidding to qualify for the season finale for the seventh year in a row and is currently No. 8 in the year-to-date standings.

Murray came into Valencia on the back of winning the Vienna title and had ended a 15-month title drought a month earlier at the inaugural Shenzhen Open. He is looking to triumph in Valencia for the second time after lifting the trophy on his 2009 debut.

Pablo Andujar set an all-Spanish quarter-final with Tommy Robredo after dismissing Dusan Lajovic 6-3, 6-2 in 70 minutes. Meanwhile, Jeremy Chardy battled to a 3-6, 7-6(4), 7-5 victory over Alexandr Dolgopolov to earn a quarter-final match-up with Pablo Carreno Busta. Qualifier Thomaz Bellucci advanced to a quarter-final clash with Ferrer when sixth seed Roberto Bautista Agut withdrew from their match due to abdominal pain.

Berdych is currently No. 7 in the Emirates ATP Race To London, just 220 points ahead of No. 8-ranked Andy Murray, who is also competing at the ATP World Tour 500 indoor tournament. Third seed Murray, the 2009 champion, could capitalize on Berdych's loss this week.

Murray, who hit 10 aces to beat Jurgen Melzer 6-3, 6-3 in 81 minutes, could rise to No. 5 in the Emirates ATP Race To London if he were to clinch the title. He won his 30th tour-level title on Sunday at the Erste Bank Open in Vienna (d. Ferrer).

Top seed and three-time champion David Ferrer will play 2004 titlist Fernando Verdasco in the Valencia Open 500 second round. Ferrer recorded his 50th match win of the year on Wednesday when he recovered from a 1-4 deficit in the second set to beat Andreas Seppi, 6-3, 7-5 in one hour and 34 minutes. It was his ninth straight victory over Seppi, who drops to a 24-30 record this season.

The Spaniard is attempting to qualify for the Barclays ATP World Tour Finals. He could rise to as high as sixth position in the Emirates ATP Race To London should he lift his fourth Valencia trophy on Sunday. The local picked up the ATP World Tour 500 tournament crown in 2008 (d. Almagro), 2010 (d. Granollers) and 2012 (d. Dolgopolov).

Fellow Spaniard Tommy Robredo also moved within two victories of a milestone, 500 career wins, as he dismissed Yen-Hsun Lu 6-2, 6-4 in a second-round match. Pablo Carreno Busta also advanced to the quarter-finals, proving to be too strong for 33-year-old Feliciano Lopez, the fourth seed, in a 6-4, 6-4 win over 65 minutes.

atpworldtour.com: October 20 2014 Valencia, Spain - Tommy Robredo moved to within three match wins of his 500th career victory on Tuesday at the Valencia Open 500 when he defeated John Isner for the first time in their fourth meeting.

Robredo won 43 of his 47 first service points and saved all five break points he faced to beat the fifth seed 7-6(3), 6-3 in 81 minutes. Earlier this month, Isner saved one match point against Robredo in Beijing. Robredo will now face Yen-Hsun Lu in the second round.

Former champion Fernando Verdasco, who lifted the 2004 title (d. Montanes) when the event was played on clay, battled past Leonardo Mayer 6-4, 3-6, 6-3 in just under two hours.

Lu, Klizan Advance to Second Round

atpworldtour.com: October 20 2014 Valencia, Spain - Yen-Hsun Lu recorded his 24th match win of the season on Monday at the Valencia Open 500 with a 6-2, 6-3 victory over Guillermo Garcia-Lopez, who is on a five-match losing streak.

Marcel Granollers, the 2011 titlist, retired due to a right leg injury against his fellow Spaniard Pablo Carreno Busta midway through the second set. Carreno Busta was leading 6-2, 3-1 after an hour of play. 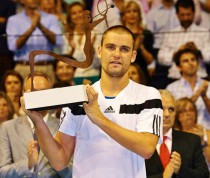 atpworldtour: October 27, 2013 Valencia - Mikhail Youzhny won his second ATP World Tour crown of the season with a 6-3, 7-5 victory over defending champion David Ferrer in the final of the Valencia Open 500. It was Youzhny's 10th career title and first victory over a Top 5 opponent since 2010, when he upset Novak Djokovic in the Rotterdam semi-finals. He also prevailed on the clay of Gstaad in July.