atpworldtour.com September 21, 2014 Metz, France - The resurgent David Goffin is set to crack a new career high in the Emirates ATP Rankings after capturing his second ATP World Tour title in Metz on Sunday. The eighth-seeded Belgian defeated Joao Sousa 6-4, 6-3 in the final of the Moselle Open.

"This is very special because my family was here today," said Goffin. "That’s the advantage of playing close to home. Winning my second title feels just as good as the first one. I’m very happy."

Goffin is back up to World No. 45, having finished 2013 at No. 113, and earned a further 250 Emirates ATP Ranking points with victory in Metz. He is projected to break into the Top 35 on Monday.

The 23-year-old Goffin has won 34 of his past 36 matches, including lifting his maiden ATP World Tour trophy in Kitzbuhel in July (d. Thiem) and success at three ATP Challenger Tour titles. Victory in the Metz final marked his 50th career tour-level win. At tour-level events alone, he has compiled a record of 17-2 since falling to Andy Murray in the opening round at Wimbledon.

Goffin recorded his second win in two meetings with Sousa, following victory over the Portuguese in the US Open second round. An early break in both sets sufficed as he prevailed in 74 minutes, saving the four break points he faced and winning 81 per cent of points behind his first serve.

atpworldtour.com September 20, 2014 Metz, France - Eighth seed David Goffin advanced to his second ATP World Tour final Saturday in Metz as he defeated Jan-Lennard Struff 7-6(4), 6-3 in the semi-finals of the Moselle Open. He has now won 33 of his past 35 matches at all levels.

The 23-year-old Belgian captured his maiden title at the bet-at-home Cup Kitzbühel (d. Thiem) in the midst of a 25-match winning streak, which saw him win three ATP Challenger Tour titles and reach the quarter-finals as a qualifier in Winston-Salem.

Having started the season at No. 110 in the Emirates ATP Rankings, Goffin is now just three spots away from returning to his career-high of World No. 42. He claimed his 19th tour-level win of the year over Struff in one hour and 33 minutes, hitting 14 aces and saving five of the six break points he faced. He had upset top seed Jo-Wilfried Tsonga in Friday’s quarter-finals.

In Sunday’s final, Goffin will face sixth seed Joao Sousa, who upset 2009 champion Gael Monfils 7-6(6), 6-2 in 88 minutes. The Portuguese withstood 13 aces and saved eight of the nine break points he faced to avenge the loss he suffered to Monfils earlier in the year in Montpellier.

The 23-year-old Belgian, the 2014 Kitzbühel champion (d. Thiem), claimed his first win in three attempts against his opponent ranked No. 11 in the Emirates ATP Rankings. Goffin withstood 17 aces from Tsonga and broke twice in the third set to advance in two hours and eight minutes.

Tsonga, meanwhile, will continue his bid to qualify for the season-ending Barclays ATP World Tour Finals in events in Tokyo, Shanghai and Paris. The 29 year old currently sits 12th in the Emirates ATP Race To London.

This week, Tsonga was bidding for his 12th ATP World Tour title and second of 2014, having defeated Roger Federer to claim his second Masters 1000 title, in Toronto.

atpworldtour.com September 18 2014 Metz, France - Top seed and two-time former champion Jo-Wilfried Tsonga, who is in contention for a place at the Barclays ATP World Tour Finals, will play David Goffin in the Moselle Open quarter-finals on Friday. Tsonga has won their two previous meetings, on grass, at 2013 Wimbledon and the 2014 Aegon Championships.

Third seed Philipp Kohlschreiber hit 12 aces past Paolo Lorenzi in a 6-3, 7-5 win as he started his quest for a sixth ATP World Tour crown. He will next meet Jan-Lennard Struff, who edged past fifth seed Jeremy Chardy 6-7(5) 6-3, 6-4 in just under two hours. Sixth seed Joao Sousa saved 14 of 16 break points to knock out Igor Sijsling 6-3, 3-6, 7-6(3) in two hours and eight minutes for a quarter-final clash against Paul-Henri Mathieu.

atpworldtour.com: September 16, 2014 Metz, France - Joao Sousa got back to winning ways Wednesday at the Moselle Open, when the sixth seed defeated Ivan Dodig 6-2, 6-2 for a place in the second round against Igor Sijsling. Since reaching the SkiStar Swedish Open final (l. to Cuevas) in mid-July, the World No. 39 has won now three of his past 10 matches.

David Goffin, the No. 8 seed, hit seven aces in a strong service performance to beat qualified Florent Serra 6-2, 6-2. This season’s Kitzbühel champion has made the biggest jump into the Top 50 of the Emirates ATP Rankings this year, rising from No. 113 to No. 45.

Jarkko Nieminen, who reached the quarter-finals (l. to Zverev) on his debut in 2010, saved all four break points to beat Sergiy Stakhovsky 6-1, 6-4 in 65 minutes. The 33 year old goes on to meet seventh seed Jerzy Janowicz.

In an All-French opening round, No.5 seed Jeremy Chardy defeated compatriot Nicolas Mahut 7-6(5) 7-5 to advance to the second round against Germany's Jan-Lennard Struff who dismissed Dusan Lajovic of Serbia 6-7(6) 6-3 6-3.

Top seed Jo-Wilfried Tsonga began his campaign for a third Moselle Open title with a 7-6(7), 6-4 victory over Luxembourg's Gilles Muller on Wednesday evening.

He fired 10 aces to Muller's 15 and saved all five break points faced on serve to record his 12th win from his past 13 matches at this ATP World Tour 250 indoor hard-court tournament. Tsonga lifted the trophy in 2011 (d. Ljubicic) and 2012 (d. Seppi), and finished runner-up to fellow Frenchman Gilles Simon last year.

Tsonga, who won the Rogers Cup title last month (d. Federer), is currently No. 12 in the Emirates ATP Race To London and will need to reach the semi-finals this week to add to his point tally. In the quarter-finals, he will await the winner between eighth-seeded Belgian David Goffin and German Tobias Kamke.

In the last match of Day Three, Frenchman Paul Henri Mathieu upset No.4 seed Lukas Rosol of Czech Republic 6-3 6-4 to set up a quarterfinal match against either Sousa or Sijsling for a place in the semifinal.

Janowicz Advances 2nd Round in Metz

atpworldtour.com September 16 2014 Metz, France - Seventh seed Jerzy Janowicz rallied to defeat Frenchman Adrian Mannarino 2-6, 7-6(5), 6-4 on Tuesday in the first round of the Moselle Open in Metz.

The 6'8" Pole, who awaits the winner between Jarkko Nieminen and Sergiy Stakhovsky, claimed the only break of the decisive set and closed out the victory in just over two hours. Janowicz, a finalist last month in Winston-Salem, is making his debut this week at this ATP World Tour 250 indoor hard-court tournament.

Another Polish player, Michal Przysiezny, notched just his second tour-level win of the season as he edged home hope Pierre-Hugues Herbert 6-4, 3-6, 7-6(4) in a contest between two qualifiers. The Pole goes on to face second seed and 2009 champion Gael Monfils for a spot in the quarter-finals.

Two other Frenchmen fell in their first-round matches Tuesday. Wild card Laurent Lokoli fell 6-2, 6-4 to Italian Paolo Lorenzi, who will next play No. 3 seed Philipp Kohlschreiber. Qualifier Kenny De Schepper, meanwhile, lost to German Tobias Kamke 6-3, 7-6(5). World No. 74 Igor Sijsling earned a spot in the second round when Italy's Andreas Seppi was forced to retire with lower back pain. The Dutchman had been leading 6-0, 4-1.

Neither player dropped serve, with Mathieu saving eight break point chances and Becker seven. The 32-year-old Mathieu, who next plays No. 4 seed Lukas Rosol, is making his 10th appearance in Metz and reached the final in 2008 (l. to Tursunov). 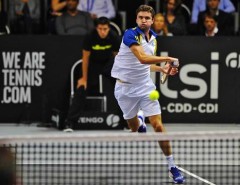