Nishikori defeated fellow London hopeful Milos Raonic, the same player he beat for the 2012 Tokyo title, 7-6(5), 4-6, 6-4 under a closed roof at the Ariake Colosseum. The final lasted two hours and 13 minutes.

Nishikori is currently No. 5 in the Emirates ATP Race To London, 540 points behind No. 4-ranked Stan Wawrinka. Raonic is placed at No. 8. Five of the eight singles spots remain up for grabs at the prestigious season finale, to be held at The O2 in London from 9-16 November. Novak Djokovic, Rafael Nadal and Roger Federer have booked their places.

Nishikori has won back-to-back ATP World Tour titles for the first time, having lifted the Kuala Lumpur crown (d. Benneteau) last week. Four of his seven trophies have come in 2014.

Nishikori took a 3/1 lead in the tie-break, with aggressive tennis that belied the physical difficulties – hip and lower back – he has endured this week. But Raonic recovered to 4/4. On Nishikori’s first set point opportunity, on Raonic’s serve at 5/6, the Japanese hit an angled slice off a big first serve. Raonic approached the net, striking down the line, but Nishikori reacted quickly to whip a forehand crosscourt winner into space to clinch the 46-minute set.

Raonic responded by playing closer to the baseline. He came close to breaking Nishikori at 2-2, 30/40, but slow movement to a forehand saw him mis-time the stroke into the net. But Nishikori was soon under pressure again. At 3-3, 30/40, Raonic rushed the net with a deep groundstroke, which forced Nishikori back to hit a perfectly timed lob winner. Two points later, Nishikori struck a backhand into the net to give Raonic hit first service break. Raonic lost five of his service points in the 44-minute second set.

In the decider, it was Nishikori who applied pressure. Raonic wriggled out of danger at 15/40 and Ad Out in the second game, while he won four straight points from 0/30 at 3-4. With victory in sight, Nishikori was aggressive and took the ball early to set up three set points on Raonic’s serve when he led 5-4. Ten thousand spectators in the Ariake Colosseum celebrated his win. Nishikori was in tears when he hugged his coach, Michael Chang.

It will be a repeat of the 2012 Tokyo final, their first meeting, which Nishikori won 7-6(5), 3-6, 6-0. Nishikori and Raonic have met three times this year, at the Mutua Madrid Open, Wimbledon and the US Open. Nishikori leads their FedEx ATP Head2Head series overall 3-1.

"It's going to be a tough match," said Nishikori. "He is playing really well this week. We always battle. It is amazing to play against him in a final here."

Nishikori defeated Benjamin Becker 4-6, 6-0, 7-6(2) in Saturday’s semi-finals at the Ariake Colosseum in Tokyo, to move up to No. 5 in the Emirates ATP Race To London, for one of the five remaining spots at the elite eight-player season finale to be held at The O2 in London from 9-16 November.

Raonic capitalized early during his semi against France's Gilles Simon. After Raonic stormed through the opening set, rain forced the arena roof to be closed causing a delay. Raonic would soon close out the 6-1, 6-4 win to reach his third straight Tokyo final.

"I believe it’s the best I have played all week. I executed well and I had a clear vision of what I need to do, so I was making the right shot selections,” said Raonic.

atpworldtour.com: October 3, 2014 Tokyo, Japan - Kei Nishikori is one match win away from contesting his sixth ATP World Tour final of the season after he recorded a 6-4, 6-2 victory over Jeremy Chardy on Friday at the Rakuten Japan Open Tennis Championships.

Nishikori remains on the heels of Marin Cilic — the player he lost to in last month’s US Open final — in the Emirates ATP Race To London as the countdown continues to the Barclays ATP World Tour Finals, to be held at The O2 in London, from 9-16 November.

Nishikori is placed at No. 6, just 45 Emirates ATP Rankings points behind No. 5-ranked Cilic, who lost to Andy Murray in the Beijing Open quarter-finals.

Milos Raonic jumped into a qualification spot for the Barclays ATP World Tour Finals next month after he reached the Rakuten Japan Open Tennis Championships semi-finals. Raonic capitalized on David Ferrer’s first-round exit in Tokyo by rising to No. 8 in the Emirates ATP Race To London, after he defeated Denis Istomin 7-6(8), 6-3 in Tokyo Friday.

The greater battler, Gilles Simon, was at his resilient best once again earlier on Friday. Having seen a 4-2 first-set lead evaporate against Steve Johnson, Simon needed to save two set points at 4-5, 15/40 en route to a 7-6(4), 6-1 victory in 90 minutes. The first set lasted 63 minutes.

Earlier this week, 29-year-old Simon saved six match points in his first-round win over Roberto Bautista Agut and he fought back from a set and 2-4 deficit against Gilles Muller in the second round. His 22nd match win of 2014 against Johnson may not have had the drama of his earlier matches in Tokyo, but his battling qualities will pose a threat to two-time runner-up Raonic.

Raonic, a runner-up in Tokyo for the past two years — 2012 (l. to Nishikori) and 2013 (l. to del Potro), broke Melzer’s serve in the 10th game to clinch the 37-minute opener. He took a 3-0 lead in the second set, only to see Melzer win three straight games. When Melzer served at 3-4, 30/40, Raonic struck a wrong-footing forehand winner for his third service break.

Denis Istomin saved the best for last earlier in the afternoon by literally falling into the quarter-finals after a dramatic match point against qualifier Michal Przysiezny in a 6-4, 7-6(5), victory.

Kei Nishikori delighted his fellow Japanese Thursday by advancing into the Rakuten Japan Open Tennis Championships quarter-finals. The fourth-seeded Nishikori overcame a slow start to beat Donald Young 6-4, 7-6(4) in 78 minutes and continue his push for a fourth ATP World Tour title of a career-best season.

Nishikori saved one set point at 5-6, Ad Out, before gaining a mini break at 5-4 in the second set tie-break. The 88-minute win was Nishikori’s 46th match victory of the year.  He is attempting to qualify for the Barclays ATP World Tour Finals at The O2 in London, from 9-16 November. He will add to his Emirates ATP Race To London total should he reach the Tokyo semi-finals.

Nishikori will now face Jeremy Chardy in the last eight at the Ariake Colloseum. Chardy defeated seventh seed Kevin Anderson 6-4, 6-4 in the final match of the day.

Ten thousand Japanese spectators watched their hero defeat Ivan Dodig 6-3, 6-4 in 85 minutes as Nishikori began his quest for a second trophy in Tokyo.

When 24-year-old Nishikori reached the US Open final last month, the tickets hotline did not stop ringing for three days, such was the clamour for tickets to the ATP World Tour 500 tournament.

"I felt more pressure in New York, it was my first Grand Slam final," said Nishikori. "Here, I could really feel the support. "Winning Kuala Lumpur [last week] gave me more confidence. I try not to pay attention to the crowd or what the opponent is doing, but it's always good to play at home. I can feel the support here."

Nishikori, the fourth seed and 2012 champion (d. Raonic), did his part mid-afternoon Wednesday by beating Dodig for the third time in four meetings. He faced a single break point in 10 service games and goes on to face Donald Young in the second round.

Stan Wawrinka’s conqueror, wild card Tatsuma Ito, was not so fortunate. Benjamin Becker blasted his way to a 6-3, 6-3 victory in 72 minutes.

Ito, a wild card entry, delighted Japanese supporters by beating top seed Stan Wawrinka, a contender for a spot at the Barclays ATP World Tour Finals, 7-5, 6-2 in the Tokyo first round. "I played a very good match," said Ito. "It is the first time I have beaten a Top 5 player. I tried my best every point and I was very focused. I was a little nervous, but I stuck to my game and I finished well."

Wawrinka admitted, "It was not a good day at the office. He started well and then I was trying to come back in the match. First round matches are never easy. He played well, particularly at the end of the first set when he was very aggressive."

Wawrinka, who is currently No. 4 in the Emirates ATP Race To London, could have qualified for the prestigious season finale, to be held at The O2 from 9-16 November, should he have reached the Tokyo final. The last time Wawrinka lost to a player outside of the Top 100 in the Emirates ATP Rankings was No. 240-ranked Nicolas Mahut in June 2013 in the Topshelf Open final at 's-Hertogenbosch.

Ito will now play Benjamin Becker, who led Jarkko Nieminen 7-5, 4-1 when the Finn retired due to fatigue. Third seed Milos Raonic, who is in Przysiezny’s quarter of the draw, battled hard to beat Bernard Tomic 7-6(3), 6-3 in the final match of the day. Raonic, a two-time Tokyo runner-up in 2012 (l. to Nishikori) and 2013 (l. to del Potro), will next challenge Jurgen Melzer, who was leading 7-5, 4-1 when Edouard Roger-Vasselin retired due to a right leg injury

atpworldtour.com: September 29, 2014 Tokyo, Japan - Marcel Granollers kept his nerve on Monday to beat his fellow Spaniard, second seed David Ferrer, 4-6, 6-4, 6-4 in the Rakuten Japan Open Tennis Championships first round. It was his first victory over Ferrer, a contender for a spot at the Barclays ATP World Tour Finals in November, in their sixth meeting.

With 15 of the Top 16 in the Emirates ATP Race To London competing at ATP World Tour tournaments in Tokyo and Beijing this week, the early loss could dent Ferrer’s hopes of qualifying for the prestigious season finale, to be held at The O2 from 9-16 November. Stan Wawrinka, the top seed at this week’s Tokyo event, needs to reach Sunday’s final to qualify for the second year in a row.

It was the 150th career match win for Granollers, who reached the Casablanca final (l. to Garcia-Lopez) in April. Ferrer, 32, drops to a 44-19 mark on the season. The encounter lasted two hours and eight minutes.

Granollers will now face Steve Johnson, who lost just seven of his first service points and hit 12 aces to beat qualifier Hiroki Moriya 7-6(4), 6-2 in one hour and 42 minutes. Johnson led 3-1 in the first set, but Moriya won the next four games in a close opener. The American improves to a 17-17 match record in 2014. 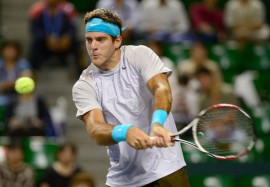 atpworldtour.com October 06, 2013 Tokyo - Juan Martin del Potro moved up to fifth position in the Emirates ATP Race To London on Sunday after he captured the Rakuten Japan Open Tennis Championships title to further boost his chances of qualifying for the Barclays ATP World Tour Finals. Top seed and wild card entry del Potro made up for his 2008 runner-up finish by beating last year’s finalist, third seed Milos Raonic, 7-6(5), 7-5 on a sun-kissed day at the Ariake Coliseum.