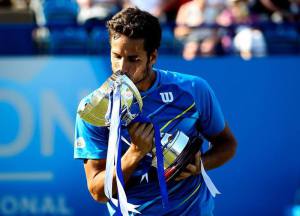 lta.org.uk June 21 2014 Eastbourne, England - Feliciano Lopez has claimed the 2014 Aegon International trophy after a 6-3, 6-7(5), 7-5 victory over Richard Gasquet. The 32 year-old Spaniard retained his title in two hours and 13 minutes against the world No.14 French player.

The Frenchman has been impressive throughout the week, but was broken by Lopez in just his second service game of the match. The Spaniard, who was looking for his third Aegon International title, was relentless throughout his service games, and gave up no break points on his way to taking the first set 6-3. The second set was proving to be a tight affair as the defending champion was broken, only to break back for 4-4.

Staying on serve for the rest of the set, a tie-break was inevitably forced. Gasquet had a 4-2 lead but Lozpez fought back, inching ahead to 5-4. However it was the Frenchman who was holding his nerve, taking the breaker 7-5. The opening of the deciding set saw two tight games, with Gasquet missing out on some crucial breaks of serve.

The match was staying with serve until the 11th game where Lopez secured a break to lead 6-5. In the final game the Spaniard needed two match points to take the title. After missing a volley at 40-15, Lopez hit a second serve ace to win the title for a second consecutive year. 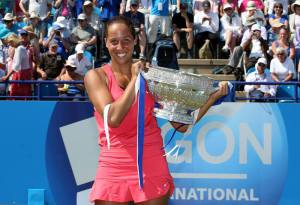 Madison Keys has been crowned the 2014 Aegon International champion after a 6-3, 3-6, 7-5 victory over Angelique Kerber. The 19 year-old American claimed her first WTA title after one hour and 56 minutes against the world No.9 German player.

Keys, the youngest player in the top 50, started strongly and took the first set 6-3, her aggressive ground stroke game pushing back the world Kerber and forcing errors. At one point Keys' serve was clocked at 126mph, the fastest serve on the WTA tour in 2014 thus far. The German, who finished runner-up in Eastbourne in 2012, was proving no pushover however, and broke at the beginning of the second set to open up a 3-0 lead.

Keys tried to fight back, but was unable to capitalise on a number of break point chances and Kerber took the second set 6-3. With very little between the two players, the third and final set was close throughout, with no breaks of serve until the final game which saw the young American play some fearless tennis to take the third set 7-5 as the German netted her forehand.

Martina Navratilova presented with the winner’s trophy, and Keys commented: “It’s incredible to be able to win this tournament along with so many other great players.” 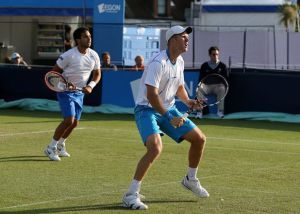 After Thursday's weather saw their match delayed, Dom Inglot and his Filipino partner Treat Huey saw off the threat of Ross Hutchins and Colin Fleming to secure their place in the 2014 Aegon International doubles final with a tightly contested 7-6(2), 6-3 victory.

It was a quick turn around for the pair, and they were soon back out on court to take on the No.1 seed pairing of Alexander Peya and Bruno Soares. In an incredibly close match, both pairs had chances but were unable to convert, Inglot and Huey quickest to strike and take the first set 7-5.

Peya and Soares were able to fight back however, and took the second set by the same score to send the game into a championship tiebreak. In a tie-break filled with suspense, the British/Filipino pair had several chances to open up leads, but were pulled back by the No.1 seeds. Eventually, a huge serve from Inglot forced a forehand error from their opponents, with Inglot and Huey seeing out the match for their third doubles title together. 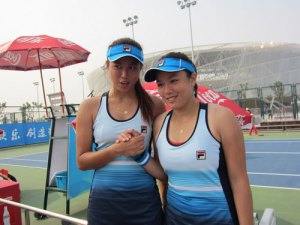 Unseeded Hao-Ching Chan and Yung-Jan Chan of Taipei completed their amazing doubles run at the Eastbourne Aegon International with a 6-3 5-7 10-7 victory in the final over former World No.1 Martina Hingis of Switzerland and Italy’s Flavia Pennetta.

The Taiwanese sisters upset No.3 seed Cara Black and Sania Mirza 6-1 3-6 10-7 in the quarter-finals, then followed it up with another upset win in the semi-finals over top-seed Italians Sara Errani and Roberta Vinci 6-3 6-2.  The Chan sisters saved two of five of their opponents’ break-point chances and converted six of nine of their own to complete the shock victory.