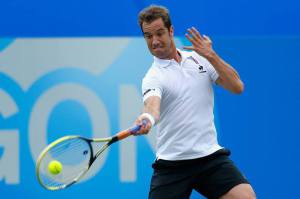 lta.org.uk June 18 2014 Eastbourne, England -  Top-seed Richard Gasquet gained a comfortable 6-3, 6-4 win in his match against Martin Klizan. The Frenchman took just over an hour to reach his third semi-final of the year, and will be looking to secure his third Aegon International title when he takes on Denis Isotmin.

World no. 77 Sam Querrey beat Julien Benneteau 7-6(5), 6-4 to secure his place in the mens semi-finals. The big serving American put 16 aces past the Frenchman, winning 90% of his first serves to make it through to the next round. Uzbekistan’s Denis Istomin also reached the semi-finals defeating France’s Edouard Roger-Vasselin 7-6(5) 6-2. Benneteau and Roger-Vasselin won the French Open doubles crown in Roland Garros two weeks ago. 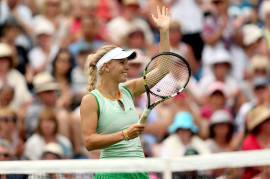 In a match full of entertainment, Giorgi took the first set in contentious circumstances, with the umpire ordering a crucial point to be replayed before Giorgi double faulted and smashed a ball into the crowd. However, she recovered to serve out the tiebreak and take the set.

Wozniacki got her game together in the second set, and started utilising her range of groundstrokes to take the match to the Italian and take the second 6-4. In the final set, some agressive groundstrokes from Wozniacki saw her counter her opponents similarily agressive stance, before a strong finish saw her through. Wozniacki will be looking to win the title for her second time following on from her 2009 victory.

British no.1 Heather Watson received a walkover into the semi-finals of the tournament after Czech Petra Kvitova withdrew from the tournament with an injured hamstring.

Fifth seed Angelique Kerber beat Russian world no. 22 Ekaterina Makarova 6-2, 6-1. This is the German Kerber's third appearance at the south coast tournament, and the world no. 9 will have been happy to avenge last year's defeat to Makarova in the second round.

Madison Keys is also through on the women's side as she beat fellow American Lauren Davis 6-2, 6-0 in just over an hour. Davis, who had come through qualifying, managed to save seven break points, but it was the four she didn't save that punished her in the end. Keys moves on to play Watson in the semi-final.