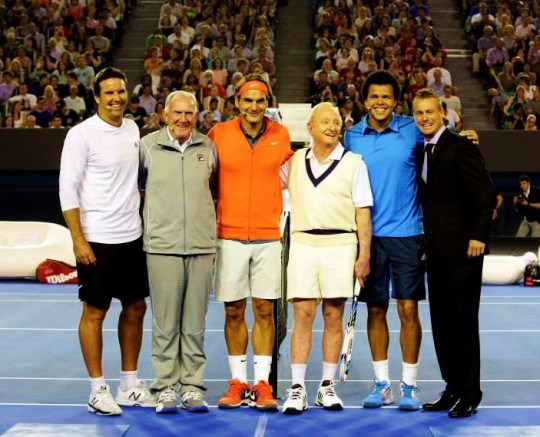 ausopen.com January 8, 2014 Dan Imhoff - Certain ovations are reserved for the true legends of a sport so when Rod Laver was brought onto court to hit a few balls with Roger Federer on Tuesday night, it was enough to bring a tear to the eye of Federer’s wife Mirka.

The magnitude of Australian great Laver’s influence on the sport is not lost on Federer and the Swiss great was humbled to have his idol participate in the charity night celebrating 10 years of the Roger Federer Foundation.

RF was all smiles. Photo ausopen.com

Before a near packed crowd on the centre court named in Laver’s honour, a contingent of Australian influences on Federer’s career were brought onto court. First, his long-time rival Lleyton Hewitt, then former coach Tony Roche, who guided him to six of his 17 majors.

Pat Rafter – a player who has the enviable honour of having never lost to Federer – followed and admitted while they only played once, it was so early on in his opponent’s career that he was “barely out of nappies.”

Federer’s opponent for the charity match, French world No.10 Jo-Wilfried Tsonga, made his entrance but without doubt the loudest cheers came when Federer greeted Laver. Read full article