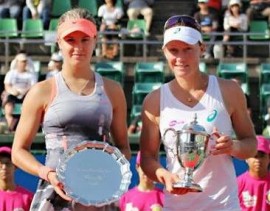 wtatennis.com October 13, 2013 Osaka, Japan - Sam Stosur survived some tense moments in the second set and was in full flight in the third to make it past Eugenie Bouchard in the final of the HP Open on Sunday afternoon, 36 75 62. After taking the first set fairly comfortably, the No.5-seeded Bouchard seemed on the verge of victory as the two kept creeping closer and closer to a second set tie-break - 2-all, 3-all, 4-all, 5-all - and Bouchard had a point to hold for 6-5. But that's when the No.3-seeded Stosur pounced, reeling off seven of the next eight points to sneak out the second set, neutralizing any immediate threat.

And after Bouchard held serve to open the third set Stosur pounced again, winning four games in a row for a 4-1 lead and never really looking back, eventually closing the match out three games later. Stosur's biggest weapons were on display for all to see on match point - she served up a massive kick serve out wide to Bouchard's backhand, then rifled a huge forehand into the open court for a winner. The Australian is now an impressive 19-3 lifetime at this tournament, winning the title twice - 2009 and now 2013. She's actually the first player to conquer the International-level tournament twice.

"I'm disappointed because I always want to win, but I'll take the lessons from this and keep working hard," Bouchard said. "I definitely tried my best today. I feel like I was playing the right way in the first set, but she raised her level in the second set and started playing much better in the third. Sometimes when your opponent plays really well, you just have to congratulate them."

Stosur came back out on the court a little later for the doubles final, but she couldn't conjure up the same comeback magic - she and Zhang Shuai were beaten by No.2 seeds Kristina Mladenovic and Flavia Pennetta, 64 63. Mladenovic now has seven WTA doubles titles to her name, Pennetta 15.