December 23, 2013 ITS Staff - USC Tojan alum Steve Johnson, two-time NCAA Singles champion, and 18-year-old Sachia Vickery captured the Australian Open Wildcard spots allotted to the U.S. Tennis Association held at Norcross, Georgia.  Johnson, ATP world-ranked No.156  defeated  Tennys Sandgren 4-6 6-3 0-6 7-6 (5) 6-1 in the men's while WTA No.195 ranked Vickery defeated Victoria Duval 6-2 6-3 in the USTA playoff women's final Johnson reached the third round of the 2012 U.S. Open also as a wild-card entry. Vickery, who also was entered as a wild card in the 2013 U.S. Open, reached the second round. 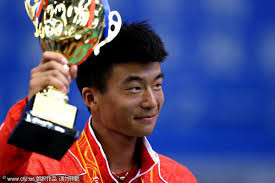 In a dominant display, Wu, who has clinched his second successive Australian Open Wildcard, showed no mercy in taking the first set 6-0 in just 24 minutes. He then took a 5-0 lead before Zhang was able to get into the match. “Wu had the ball on a string. His effortless movement, power and consistency were impenetrable for the first eleven games,” said Tennis Australia’s Mark Edney.

Zhang showed some fight winning the next three games taking the second set to 5-3.  Momentum was in his favour making three straight unforced errors to give Wu three match points.

Earlier on Sunday, 19-year-old qualifier Tang Hao Chen of China claimed the women’s wildcard, downing Risa Ozaki of Japan 6-3 6-3. Tang, ranked No.467, settled into the match quicker than her opponent, breaking Ozaki’s serve in the opening game and then breaking again in the ninth game to take the first set in 43 minutes. 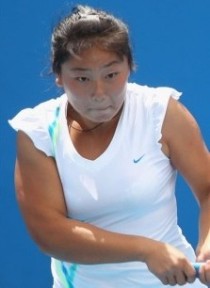 Tang shot out to a 4-0 leave in the second, before starting to tighten up.  Ozaki came back to win the next three games, but Tang steadied to see out the match. “I hope to play a top 10 player in Australia,” Tang said. “I would like to play on Hisense Arena.”

In men’s doubles, a match tiebreak in the third set was required to crown India’s Yuki Bhambri and New Zealand’s Michael Bhambri as the victors for the men’s doubles wildcard, defeating Chinese duo Mao-Xin Gong and Zhe Li 7-6(3) 1-6 [10-5].

In women’s doubles China’s Xinyun Han and Japanese partner Miki Miyamura were the first players to be awarded wildcards for Australian Open 2014. In front of a vocal crowd the pair saw off a tough challenge in today’s final beating the Chinese pair of Hao Chen Tang and Zhaxuan Yang 4-6 6-4 [10-8]. 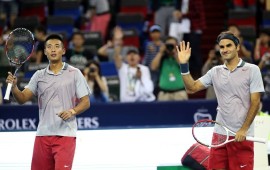 In Friday’s matches, Wang, Bhambri, Di cruised to straight-set victories while Wu’s compatriot Ze had to come back from a set down to defeat Taiwan’s Chieh-Fu Wang 5-7 6-2 6-2. Wang and Bhambri beat Chinese qualifiers Zhao Cai 6-0 6-1 and Zhicheng Zhu 6-2 6-1 respectively.

Wu is aiming to win his second successive wildcard after dispatching countryman and Davis Cup teammate Li Zhe 6-3 6-3. “Everyone comes here wanting to win the wildcard,” commented Wu. “If I can get the wildcard [again] I will be very happy.”

The upsets continued in the women’s draw, with second seed Erika Sema of Japan bundled out by China’s Wang Yafan by a scoreline of 6-4 6-1. Third seed Risa Ozaki, also of Japan, is the only remaining seed and will join three Chinese players in semifinal action of Friday after ousting Chin-Wei Chan of Taiwan 6-2 6-4.