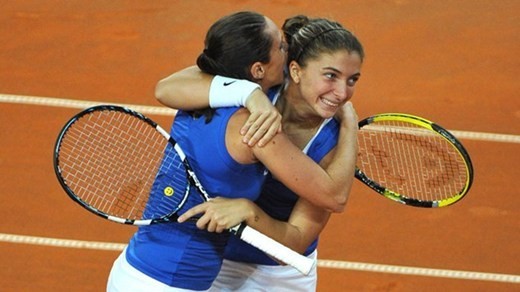 FEDCUP.COM - RIMINI, ITALY: Doubles world No. 1's Roberta Vinci and Sara Errani clinched a thrilling tie on home soil by defeating Liezel Huber and Varvara Lepchenko 62 62 much to the delight of the partisan crowd.The Italians will now play reigning champions Czech Republic at home in April's semifinals in what is sure to be a thrilling tie. Earlier in the day Varvara Lepchenko stunned Sara Errani 75 62 to give USA a surprise 2-1 lead in the third rubber, before Vinci levelled proceedings at 2-2 with a 62 46 61 triumph over Jamie Hampton.﻿﻿ Read full article﻿

FEDCUP.COM - OSTRAVA, CZECH REPUBLIC: The Czech Republic’s remarkable run in Fed Cup by BNP Paribas – indeed in team tennis generally – goes on. The champions for the past two years secured their place in this year’s semifinals by taking a 3-0 lead over Australia, and it was done the hard way, Petra Kvitova coming back from match point down to beat Sam Stosur in the top match of the weekend. While the result is entirely in keeping with the Fortress Fed Cup Petr Pala has created with his happy and powerful Czech team, it’s also a bitter blow for Stosur. After losing to Lucie Safarova on two tiebreaks on Saturday, she played vastly better tennis for an hour, reminding those watching why she was US Open champion in 2011.﻿ Read more

FEDCUP.COM - MOSCOW, RUSSIA: MOSCOW, RUSSIA: Russia are through to the Fed Cup by BNP Paribas semifinals, but they were pushed all the way by a Japanese side and in particular, Ayumi Morita, who produced some of the best tennis seen over the course of this weekend. The tie eventually went all the way to a live fifth rubber, but Russia’s doubles pairing of Elena Vesnina and Ekaterina Makarova, who are both very accomplished players in this format, had too much for Morita and Misaki Doi, as they ran out easy straight sets winners, to give their country that all important third point.﻿﻿ Read more