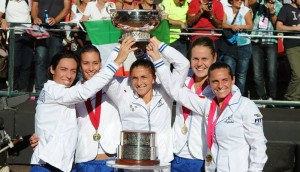 fedcup.com: November 03 2013 Cagliari, Sardinia - There was to be no heroic comeback from the visitors on the final day of the 2013 Fed Cup by BNP Paribas final as Sara Errani took just 59 minutes to beat Alisa Kleybanova and claim a fourth title for the hosts as Italy beat Russia 4-0 at the Tennis Club Cagliari.

World No. 7 Errani showed all her experience and professionalism in her 61 61 victory over Kleybanova and Karin Knapp and Flavia Pennetta completed the whitewash with a 46 62 [10-4] win over Margarita Gasparyan and Irina Khromacheva in the dead doubles rubber at the Tennis Club Cagliari. “We are very happy,” said 26-year-old Errani, who only faced two break points during her match. “It was a very good week for us. I am happy with how I played.

In one last throw of the dice from Russian captain Shamil Tarpischev, he decided to field world No. 183 Alisa Kleybanova instead of Alexandra Panova, who on the previous day had narrowly lost a bruising three hour and 13 minute encounter to Roberta Vinci. However, considering that this was Kleybanova’s first match on red clay since May 2011 after recovering from Hodgkin’s lymphoma, this was a step too far for the 24-year-old. Errani was in control from the off and Kleybanova struggled to find her range, as well as her first serve, as Errani hit a cross-court forehand winner to seal the first set in under half an hour. 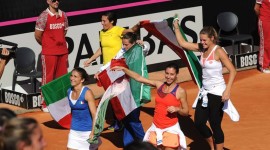 The second set followed a similar pattern to the first as Kleybanova continued to make a number of unforced errors as Errani worked her around the court. A stunning drop-volley saw Errani earn two match points on Kleybanova’s serve and she only needed one as the Russian netted with the volley.

The 50th anniversary final may have proven to be a one-sided affair in the end but it did not take away any of the satisfaction for the terrific 5,000-capacity home crowd, as well as Italy captain Corrado Barazzutti who rightly pointed out that it takes more than just a weekend’s work to win the Fed Cup.

He said: “Maybe the final was very strange because we did not play against the best players from Russia but it was very tough to play in this condition. We had to concentrate and we were scared a little bit. Maybe it was one of the more easy Fed Cups that we won but I want to remember that we beat the best team in the world [Czech Republic] in the semifinal. The important thing is to win when you have a chance to win.”

Along with Russia, Italy have dominated the Fed Cup over the last decade. This is Italy’s fourth title in eight years, which is testament to their commitment and team spirit. “I think the players have the right spirit,” said Barazzutti. “The girls like to play for their country, they like each other, they are friends who support each other and that is the secret I think to win in Fed Cup.”

R4 R. VINCI  vs I. KHROMACHEVA Not played