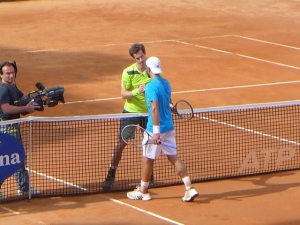 Murray is congratulated by Melzer after the match. Photo internazionalibnlditalia.com

atpworldtour.com: May 15 2014 Rome, Italy – For a set and a bit, it seemed as though Rafael Nadal was going to be embroiled in another gladiatorial contest at the Foro Italico on Thursday, following on from the 3hr., 19min., match he played the night before against Gilles Simon.

But the Spaniard found another gear in time to finish strongly and defeat Mikhail Youzhny 6-7(4), 6-2, 6-1 to reach the quarter-finals at the Internazionali BNL d’Italia. The victory earned Nadal a quarter-final meeting with Andy Murray in what is set to be their first meeting since the end of 2011. Nadal leads their FedEx ATP Head2Head series 13-5, winning their last clay-court contest in straight sets in the 2011 Roland Garros semi-finals. The seventh seed Murray beat Jurgen Melzer of Austria 7-6(1) 6-4.

Two-time Rome champion Novak Djokovic overcame a test from World No. 29 Philipp Kohlschreiber to win 4-6, 6-2, 6-1 in the Internazionali BNL d'Italia third round on Thursday evening. The 30-year-old Kohlschreiber made an impressive start to the match as he raced to a 4-0 lead. The German had notched back-to-back upsets of Top 25 players Jerzy Janowicz and 16th seed Tommy Robredo to set up the meeting with Djokovic. 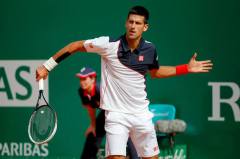 After the Serb conceded the opening set, he got back on track in the second and third, surrendering only three more games to close out the victory in 95 minutes. Djokovic, an 18-time ATP World Tour Masters 1000 champion, will face 2010 Rome finalist David Ferrer in the quarter-finals. The two have clashed 16 times, with Djokovic leading 11-5 in their FedEx ATP Head2Head series.

World No. 19 Tommy Haas recorded his first Top 10 win in over a year on Thursday as he upset third seed Stan Wawrinka 5-7, 6-2, 6-3 to reach the quarter-finals of the Internazionali BNL d’Italia in Rome.

The German benefitted from 40 unforced errors off Wawrinka's racquet and successfully employed an aggressive strategy, breaking the Australian Open champion decisively in the eighth game of the final set before closing out victory in two hours. World No. 10 Milos Raonic earned his first win in three attempts against Jo-Wilfried Tsonga as he edged the Frenchman 7-6(5), 6-4. The Canadian served seven aces and saved all five break points he faced as he clinched victory in one hour and 48 minutes.

For the second week in a row, fifth seed David Ferrer got the better of Ernests Gulbis, beating the Latvian 6-2, 6-3 in 71 minutes. The Spaniard had also beaten Gulbis last week in the quarter-finals of the Mutua Madrid Open. 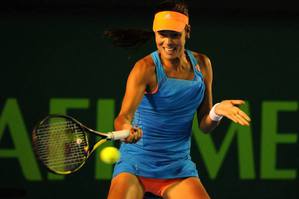 wtatennis.com: May 15 2014 Rome, Italy – Ana Ivanovic blasted 22 winners - including a huge forehand winner on match point - to surprise Maria Sharapova at the Internazionali BNL d'Italia on Thursday.  Ivanovic was in vintage form Sharapova in straight sets - ending her seven-match losing streak against the Russian.

The No.11-seeded Ivanovic came out firing on all cylinders, storming through the first set in just 31 minutes, 6-1, then breaking in the first game of the second set for a 1-0 lead. The No.8-seeded Sharapova broke back and stayed on serve with Ivanovic for the next six games, but Ivanovic broke in style for 5-4 - she blasted a huge winner to seal the break - and she then served the match out, finishing it off on another huge hook forehand winner.

Awaiting Ivanovic in the quarterfinals is No.13 seed Carla Suárez Navarro, who advanced to the last eight via walkover after No.4 seed Simona Halep had to withdraw because of an abdominal injury.

Serena Williams cruised past fellow American Varvara Lepchenko to not only round out the quarterfinal line-up at the Internazionali BNL d'Italia, but to tie Venus Williams for most career match wins among active players - the WTA legends are now tied at 652 career match wins apiece.

The No.1-seeded Williams was broken once early in the second set, but that was after she fought off four break points in that game already, and apart from that she cruised to victory, 6-1, 6-2. Awaiting Williams in the quarterfinals is Zhang Shuai, who rallied from a break down in the third set to make it past American qualifier Christina McHale in two hours and 41 minutes, 6-2, 4-6, 6-2.