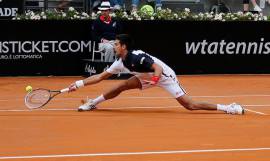 atpworldtour.com: May 17 2014 Rome, Italy - Novak Djokovic will attempt to capture his third title at the Internazionali BNL d'Italia and his 19th ATP World Tour Masters 1000 trophy on Sunday at the Foro Italico in Rome. He will compete against seven-time champion Rafael Nadal who cruised past Grigor Dimitrov 6-2 6-2 in the other semi- final.

Second seed Djokovic earned a place in his 65th tour-level final the hard way, completing a 6-7(5), 7-6(4), 6-3 victory over eighth seed Milos Raonic in just over three hours on Saturday afternoon. He is looking to lift his 44th trophy overall in his fifth Rome final.

Raonic played with great confidence and discipline in the first set, which he might have won 6-4. The Canadian struck an unintentional inside-out backhand winner, for which he apologised, at 4-5, 30/30 to create his first set point opportunity. But Djokovic kept his nerve to take the set to a tie-break. Djokovic led 3-0 in the tie-break, but Raonic responded by winning six straight points. Raonic wrapped up the set in 72 minutes, having hit 21 winners, including eight aces. He saved all eight break points he faced.

Djokovic and Raonic each broke serve once en route to the second set tie-break. It turned in Djokovic's favour at 5-4, when he hit a big forehand winner. Raonic then hit a backhand slice long to give Djokovic the set, which lasted 70 minutes. Though Raonic hit 24 winners to Djokovic's 12, the two-time former champion in Rome found a way to win. Djokovic broke Raonic to 30 in the opening game and final game of the deciding set. 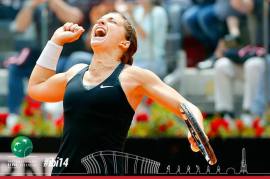 wtatennis.com: May 17 2014 Rome, Italy - Serena Williams survived a mid-match blip to defeat Ana Ivanovic, 6-1, 3-6, 6-1, and reach the final of the Internazionali BNL d'Italia. Ivanovic has been building up quite a head of steam of late, with two WTA titles and a number of deep runs edging her ever closer to a return to the Top 10. Arguably the catalyst for this run was her showing at the Australian Open, when the Serb defeated Williams on her way the quarterfinals.

Williams' progress this week has been serene, but her game went walkabout at the start of the second, Ivanovic rattling off four straight games to level up a match that had looked to be headed in only one direction. However, as on so many occasions in the past, Williams responded by raising her level once again. A series of devastating returns earned her a break at the start of the decider and from that point on it was one-way traffic as the American coasted across the finish line. 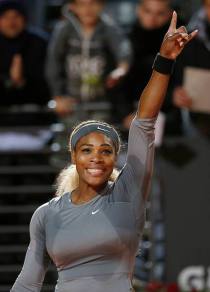 Sara Errani ended Italy's 29-year wait for a finalist at the Internazionali BNL d'Italia with a straight set victory over No.6 seed Jelena Jankovic on Saturday. Since its inaugural staging in 1930, Rome has been an integral event in the tennis calendar. Recently, though, the home nation has been starved of success, with no player reaching the final since Raffaella Reggi, in 1985. In that time, there have been some near misses, most recently, 12 months ago when current Italian No.1 Errani made the semifinals.

On Friday, Errani produced one of the performances of her career to upset Li Na, and she carried this form into the early stages of her semifinal, marrying her usual unerring consistency with some wonderfully deft touches to reel off four straight games. Jankovic could find no answer to her opponent's brilliance, cutting a disconsolate figure towards the end of the opening set. Despite her frustrations, the Serb started the second with an increased intensity, and in the fifth game a nerveless overhead and a brilliant down-the-line backhand rewarded her with a break.

However, this setback only succeeded in strengthening the resolve of the Italian, whose break in the next game was greeted with a deafening roar of approval from a packed Centrale crowd. An even louder one was to follow as Errani survived a late wobble to close out a 6-3, 7-5 victory after just under two hours on court.