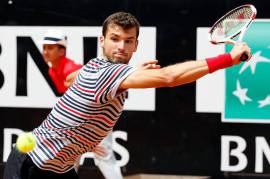 atpworldtour.com May 16 2014 Rome, Italy – Novak Djokovic prevailed in a gruelling battle with David Ferrer Friday in Rome, reaching the semi-finals of the Internazionali BNL d’Italia with a 7-5, 4-6, 6-3 victory over the Spaniard.

The 26-year-old Djokovic edged Ferrer in two hours and 32 minutes, improving to a 12-6 lead in their FedEx ATP Head2Head series

World No. 2 Djokovic will attempt to reach the final at the Foro Italico for the fifth time when he takes on Milos Raonic in Saturday’s semi-finals. Raonic advanced to his second ATP World Tour Masters 1000 semi-final as he steadied himself to beat Jeremy Chardy 6-3, 5-7, 6-2.

The 23-year-old Raonic reached his first Masters 1000 final on home soil last year when he finished runner-up to Rafael Nadal in Montreal. The right-hander is looking to win his first clay-court title this week and goes on to face Novak Djokovic in the semi-finals. 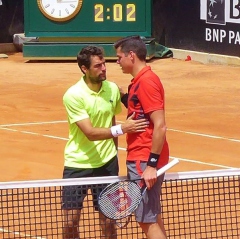 Chardy and Raonic after the match. Photo internazionalibnlditalia.com

Grigor Dimitrov reached his first Masters 1000 semi-final. In a clash between the youngest and oldest players in the Top 20 of the Emirates ATP Rankings, Dimitrov had won the first set 6-2 against Tommy Haas when the 36-year-old German was forced to retire with a right shoulder injury.

World No. 14 Dimitrov could reach another milestone this week by breaking into the Top 10 for the first time. The right-hander must win the title at the Foro Italico and hope that Raonic doesn’t reach the final to break into the game’s elite. In Saturday’s semi-finals he will face World No.1 Rafael who outlasted Andy Murray 1-6, 6-3, 7-5.

Murray served up a bagel set the last time he faced Rafael Nadal, three years ago in the Tokyo final. On Friday, Murray picked up where he left off when the pair renewed their rivalry in the quarter-finals of the Internazionali BNL d’Italia, but was unable to hold off the seven-time Rome champion in the end. 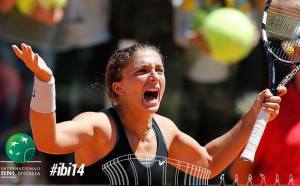 wtatennis.com: May 16 2014 Rome, Italy - Serena Williams and Ana Ivanovic battled through their quarterfinal matches at the Internazionali BNL d'Italia on Friday, setting up a blockbuster semifinal clash on Saturday at the Premier-level event. It's also a rematch of their Australian Open match - which Ivanovic won.

The No.11-seeded Ivanovic was the first of the pair to advance, pulling off a grueling 6-4, 3-6, 6-4 win over No.13 seed Carla Suárez Navarro. The win came a day after Ivanovic pulled off one of the biggest surprises of the week, stunning No.8 seed Maria Sharapova in straight sets (read more here).

The No.1-seeded Williams followed at night with a 6-1, 6-3 victory against Zhang Shuai, throwing down 35 winners to just 22 unforced errors to outdo the Chinese rising star in an hour and nine minutes.

Williams leads Ivanovic in their head-to-head, 4-1, but there's a revenge factor for Williams - that one Ivanovic win came in their last meeting, and at a Grand Slam too, in Australia earlier this year.

Sara Errani got past World No.2 Li Na for her first Top 3 win and a place in the semifinals of the Internazionali BNL d'Italia. Errani had been 0-6 against Li, while losing 12 straight sets, and had mustered just five games combined in their two previous clay court meetings.

Former French Open champion Li came into this encounter an impressive 26-4 on the year and having been dominant in her two matches so far this week. On serve but down 3-2 in the first set, the 10th-seeded Errani reeled off four straight games to take the set. After Li edged Errani in the second set and the players split the first four games of the third set, Errani again won four consecutive games for a 6-3, 4-6, 6-2 triumph.

Jelena Jankovic's love affair with Rome continued, as the two-time champion here returned to the semifinals with a victory over World No.3 Agnieszka Radwanska.nThe sixth-seeded Jankovic broke Radwanska in the first game of the match, and with each player holding serve the rest of the first set, that was enough to take the set. Radwanska finally broke Jankovic to go up 4-2 in the second set, but Jankovic promptly reeled off four straight games to secure the 6-4, 6-4 triumph.