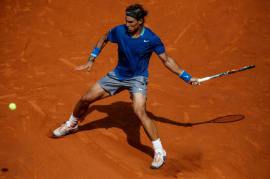 atpworldtour.com: May 8 2014 Madrid – - World No. 1 Rafael Nadal recorded his 17th straight win in 21 meetings against Tomas Berdych on Friday for a place in the Mutua Madrid Open semi-finals.

Three-time champion Nadal defeated the sixth seed 6-4, 6-2 for his 28th match win of the season, which includes two ATP World Tour titles. He will next play Roberto Bautista Agut, who will be making his maiden ATP World Tour Masters 1000 semi-final appearance.

World No. 5 David Ferrer advanced to the Mutua Madrid Open semi-finals for the first time in four years on Friday night, after knocking out Ernests Gulbis 7-6(3), 6-3. The Latvian claimed the first break of the match, going up 3-2 in the second set, but Ferrer came back strongly, rolling through the final four games to clinch the victory after one hour and 40 minutes 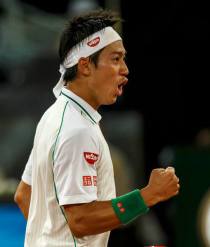 Kei Nishikori will break into the Top 10 of the Emirates ATP Rankings next Monday, after defeating Spaniard Feliciano Lopez 6-4 6-4 on Friday night in the Mutua Madrid Open quarter-finals.

The 24 year old will be the first Japanese player to rank inside the Top 10 and the first Asian player since Thailand’s Paradorn Srichaphan on 29 March 2004. Nishikori, who began the week at No. 12, had previously reached a No. 11 Emirates ATP Ranking on 17 June 2013

Nishikori prevented a historic semi-final line-up of four Spaniards for the first time in ATP World Tour Masters 1000 history as he beat Lopez. The 10th seed saved all three break points he faced and capitalised on two of his nine opportunities, closing the match after one hour and 30 minutes. 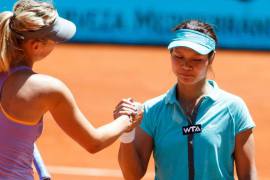 Radwanska, the No.3 seed at the Premier Mandatory event, looked headed for a straight set victory after taking the first set and twice going up a break in the second set, for 2-1 and 3-2. Garcia found the range on her big groundstrokes and fought her way back into it, taking the second set, but Radwanska got one last decisive break in the first game of the third set and Radwanska finally closed out the French qualifier in two hours and 17 minutes, 6-4, 4-6, 6-4. Radwanska is now tied with Carla Suárez Navarro for most WTA-level match wins on the year - 28. 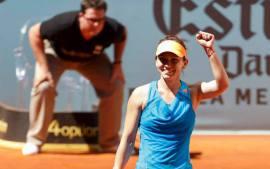 Awaiting Radwanska in the semifinals is No.8 seed Maria Sharapova, who rallied from a set and a break down to beat No.2 seed Li Na earlier in the day, 2-6, 7-6(5), 6-3. Li looked like she was going to cruise to victory after breaking for 4-3 in the second set - she hadn't dropped serve yet in the match - but Sharapova snuck out a break, stayed close with Li for a while, then pulled away at the end. Sharapova leads Radwanska in their head-to-head, 9-2, which includes 3-0 on clay courts.

The other semifinal will pit No.4 seed Simona Halep against No.5 seed Petra Kvitova. Kvitova was the first to advance, not even having to take the court, actually - Serena Williams, the No.1 seed and two-time defending champion, had to withdraw from the tournament because of a left thigh injury.