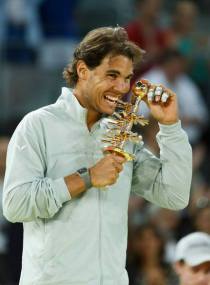 atpworldtour.com: May 11 2014 Madrid – World No. 1 Rafael Nadal captured his 27th ATP World Tour Masters 1000 title on Sunday as he fought back from a set and a break down against Kei Nishikori to win the Mutua Madrid Open final. The Spaniard had turned the match around to lead 2-6, 6-4, 3-0 when Nishikori was forced to retire with a back injury.

Now with 63 tour-level titles, the 27-year-old Nadal moves to stand-alone sixth on the Open Era title leaderboard. One more would see him draw level with joint-fifth Bjorn Borg and Pete Sampras. It was his 44th clay-court title, taking him to within two trophies of tying Guillermo Vilas’ all-time record of 46 titles. The Mallorcan was presented with the winner’s trophy by Queen Sofía of Spain.

Nishikori was contesting his first ATP World Tour Masters 1000 final and saw his run of 14 successive wins come to an end. The right-hander’s result in Madrid has ensured he will become the first Japanese player to break into the Top 10 of the Emirates ATP Rankings on Monday.

The 24-year-old Nishikori was coming off his first ATP World Tour clay-court title in Barcelona two weeks ago (l. to Giraldo), but had been troubled by a back injury in his past two matches at the Caja Magica. He had prevailed in the longest match of the tournament against David Ferrer in the semi-finals on Saturday night, lasting two hours and 56 minutes. 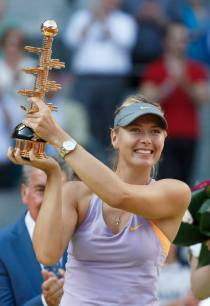 wtatennis.com: May 11 2014 Madrid -  - Maria Sharapova went wild in the first set but brought her best out from there to overcome Simona Halep and win the Mutua Madrid Open - and stay perfect on clay courts this year.

A lot of players have been playing against "the new Halep" for the first time over the last year, and this was another one of those intriguing match-ups, as the pair's only two previous meetings came back in 2012, when Halep was ranked No.50 and No.47, respectively. Here was a No.5-ranked Halep, winner of her first seven WTA titles over the last 12 months, and hungry for her first win over Sharapova.

But Sharapova has been a new player the last few weeks - well, renewed, more like - going 10-0 since the start of the clay court season, finally finding her very best tennis again after sitting out the second half of last year with a shoulder injury. Could she keep her clay court winning streak going?

It didn't look like Sharapova would do it after the first set. Their winners were comparable - Sharapova led that stat 4-3 - but she also had three times as many errors, 15-5, and Halep cruised, 6-1. Things swung completely in the other direction from there, though. The shots that were flying on her began finding the court - deep, powerful and overwhelming, as usual - and Sharapova was in complete control over the next two sets, breaking early in both and never looking back to win, 1-6, 6-2, 6-3.