CHINA ON THE RISE

China is now in a position to be the new tennis power for women’s professional tennis. Since the Association of Tennis Professionals (ATP) Tennis Masters Cup was first played in Shanghai in 2002, tennis has grown in popularity in China.  With China experiencing economic growth, the middle class have risen and chosen tennis as a way of increasing their social standing. It has also become a favorite family sport.

Last June, Li Na became the first Chinese player in history to win a Grand Slam singles title when she defeated defending champion Francesca Schiavone 6-4, 7-6(0) in the French Open final at Roland Garros in Paris. It was the first singles Grand Slam title for a Chinese or Asian woman.  Li, who also made the Australian Open final earlier this year, has been largely responsible for putting Chinese tennis on the map.﻿

The victory may have launched a wave of future Chinese tennis stars when the women’s final was watched by an estimated 116 million Chinese according to the Women’s Tennis Association citing figures from state broadcaster CCTV. Sixty million viewers also saw Li lose to Belgium’s Kim Clijsters in the Australian Open final in January.

The 29-year-old from Wuhan temporarily stopped playing in 2002 when her ranking was down to 120 and enrolled in journalism spending two years away from the game.  She felt that in case tennis wouldn’t work out, she’ll have a back-up plan. In China, athlete’s families put a premium to education ahead of sports. Nine years later, her dream came true. Li Na is now a huge star in her home country.

At the age of twenty-nine, Li has achieved her greatest victory and is certain to inspire many young athletes to follow her footsteps. The development of tennis stars from other parts of Asia, as well as the addition of tennis as a medal sport in the Beijing Olympics have contributed to the rise of the sport. ﻿ 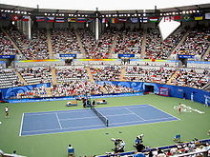 There have been major efforts to develop more and better Chinese tennis players.  Given the money and fame that a player can earn through tennis compared to other popular rackets sports such as badminton and table tennis, it is still only a matter of time before China becomes a tennis powerhouse. The Chinese authorities have allowed Chinese tennis players the option to go off on their own.  Li Na, Zheng Jie and her Grand Slam doubles title winning partner Yan Zi and Peng Shuai, became the only four Chinese tennis players to leave the state-supported system.  These players are all still representing China, but they have all appreciated the opportunity to manage their careers more themselves.

Players who play outside the formal Chinese coaching system retain their prize money but also must cover their own expenses.  In the past, they had to return 60% of their winnings and now they only have to turn over 12% to the Federation.  China has had tremendous success historically with its traditional sports training system which has produced so many Olympic medals in many sports.  However, tennis is a very individual sport and offering players more flexibility in terms of their training and tournament scheduling may yield even more success. ﻿

The eight-petaled Qi Zhong Stadium in Shanghai. Venue of the ATP Masters.

Both the International Tennis Federation and the Asian Tennis Federation have also invested in building the game in China.  Chinese women such as Li Na and Jie Zheng have made the biggest impact on the international tennis scene so far, but it’s hard to believe that Chinese men won’t be moving into the top 100 sometime soon.  What is ironic, though, is that American Michael Chang and Paradorn Srichaphan of Thailand have been hailed as leading the Asian tennis boom, however, there are no Chinese men ranked in the top 100 and none played in the main draws at the recent French Open or Wimbledon except for Chinese-Taipei’s  Yen-Hsun Lu .

In Japan, where tennis has been popular for many years, the most successful players have also been women such as Ai Sugiyama and Kimiko Date.  There is a long history of Olympic success by Asian men in other racquet sports. Former American tennis star Michael Chang founded and opened the Mission Hills Tennis Academy in Shenzhen.  The tennis academy has 50 courts to train junior tennis players.  All of these investments in tournaments, training and tennis complexes are bound to pay off for Chinese tennis in the future.

China has also invested heavily in developing world-class tennis facilities. The attractive Qi Zhong stadium featuring an eight-“petaled” retractable roof that opens up like a magnolia flower (Shanghai’s city flower) was built and hosted the ATP Tennis Masters Cup in 2005.  It holds 15,000 tennis fans and have also hosted an ATP 1000 event in 2009 even when the ATP Tennis Masters Cup moved to London.  The other major tennis complexes are the Olympic Green Tennis Centre in Beijing and the Beijing Tennis Center. ﻿