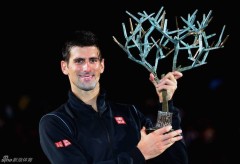 itftennis.com December 18, 2013 - The ITF has announced that Serena Williams of the United States and Novak Djokovic of Serbia are the 2013 ITF World Champions. Williams is named Women’s World Champion for the fourth time, while this is the third successive year that Djokovic has received the honour. 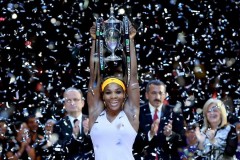 Serena Williams is named Women’s World Champion for the second straight year after reclaiming the year-end world No. 1 ranking for the first time since 2009. The 32-year-old was almost invincible in 2013, winning 78 of 82 singles matches played, and a career-best 11 titles. She captured two Grand Slam titles, at Roland Garros and the US Open, to stand at 17 career majors, and went on to win the year-end WTA Championships.

Novak Djokovic narrowly edges out Rafael Nadal to become Men’s World Champion thanks to his consistency at the Grand Slam tournaments and year-end performances. The 26-year-old won his third successive Australian Open title, and was a finalist at Wimbledon and the US Open and a semifinalist at Roland Garros. He won seven titles during the year, including the ATP World Tour Finals, and was unbeaten in seven singles rubbers as Serbia reached the Davis Cup Final.

Djokovic said: “It is an honour to be named ITF World Champion for the third year running. I’ve had a great 2013 season, and managed to end the year on a high. This will definitely serve as a good platform for 2014.”

ITF President Francesco Ricci Bitti said: “Serena Williams demonstrated once again why she is one of the greatest athletes of all time, and is a worthy winner of the women’s award. The men’s award was more closely contested, but our criteria rewards players for their performances at the Grand Slam tournaments and in our team competitions. Rafael Nadal made a remarkable comeback from injury with two Grand Slam wins, but it is Novak Djokovic’s consistent results across all four Slams, Davis Cup and the ATP World Tour Finals that see him named World Champion.” Full article

Meanwhile, Djokovic has hired six-time Grand Slam champion Boris Becker to be his head coach. Becker will accompany Djokovic to all the grand slam beginning next month's Australian Open where the Serbian star is gunning  for a fourth straight title. Read more